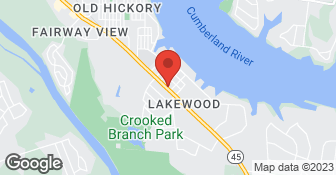 Blocker Heating & Cooling specializes in air conditioning and heating installation and repair. We service both residential and business, providing reliable service so that you can get back to being comfortable in your home or office! We are EPA certified and a licensed contractor in the state of Tennessee. Financing is available, call for details.  …

On a Budget Heating & Cooling

Description of Work
They do some re-plumbing for the whole house.

Overcharged me for by $200. Very shady practices. I would never use them again.

Description of Work
They up-charged me because of the "reason" for the call even though they only did $100 worth of work after discovering they in fact did not have to do the service requested (they still charged for the full amount even though they did much less).

Description of Work
Service call. My complaint was that my air conditioning was blowing cold air but the upstairs did not get below 80 degrees during the day.

My central air unit went out on 8/2/11. I called Caputo in the afternoon on 8/2/11. They said they would be out on 8/3/11. They arrived at 10:30AM. The technician suspected it was a run capacitor problem. He was right. The old one had a hole and was leaking oil. He rummaged through a big box in the back of his truck and could not find an exact match. So he used two different ones (one for the compressor; the other for the fan). He hooked them up and voila, the unit worked fine. I can't say with any certainty that the replacement capacitors were new. My guess was from the volume in the box, they were not. But they did work and I'm cold again. It all took just over an hour. His price was a bit high, but he did have a distance to travel and he got out here in less than 24 hours......so all's well that ends well. We hit 100 degrees today. I would definitely consider using them again.

Description of Work
Replaced the run capacitor on my central air unit.

My problem is that we were charged $275 for this work! We have always been charged fairly by Caputo in the past which is why we didn't bother to get an estimate. Had we known it would be this much we would have gotten our local handyman to do the job or just done it ourselves. This was not a technical repair. As for punctuality. They made an appointment for a Tuesday. I scheduled for this and they canceled. I made a second appointment for the next week and they cancelled again. They did come through on the third try. As such we cannot recommend this company.

Description of Work
We had some work done on our AC unit. The job was to seal up some spaces where the rain shield didn't fully cover entry into the crawl space by cats, mice etc. The Tech did an excellent job and was very professional. The job took about an hour.

My sister and I had already purchased the sink so we called Caputo to complete the installation. The gentleman removed the old vanity and replaced the existing galvanized pipe. Once he began installing the new sink and pedastal is when the problems started. The sink had to be anchored to the tile wall but he could not get a tight fit. Unfortunately he did not mention the fact until I inspected the work and just happened to lean on the sink. I almost fell over but was able to save myself and the sink at the last second. When I asked him to fix the problem, he strugged his shoulders and said that he had already tried as many things as he could and could not make it any more stable. He then recommended we replace our valve behind the commode for a "modest" $75. We called Caputo to complain about the sink and the "owner" showed up. After spending about 5 minutes inspecting the installation and declaring it to be safe and "normal" he took the next 20 minutes to witness to us about his faith and invite us to church (as if!). As soon as he left, my sister and I put our heads together to figure how to stabilize the sink -- it took us about 5 minutes to figure out that we needed to anchor it from the other side of the wall using a 2 by 4. This was more work, certainly, and we had to repair the drywall in the other room, but the sink is now completely stable. The plumber that came to the house, after doing such a lousy job, then told us he would be happy to do work for us on his own time and we would not have to pay as much. With employees like that, who needs competitors? I would never use Caputo again. Some months later we needed to get a leak fixed and called a plumber recommended by our aunt & uncle. When we asked the new plumber about the commode valve (which would not turn), he said that he would not recommend replacing it and he spent about 10 minutes fixing it for us. We continue to use this plumber and have highly recommended them in a different report.

Description of Work
The serviceman came diagnosed the problem while I watched. He told me the problem and gave me the total. I asked him if he wanted me to go get the part he said, No! He went and got the inducer motor and fan. He installed the inducer motor and fan. He wrote up the ticket with no price break down. I was upset there was no price break down.

Overall, I am impressed with Caputo's. I actually have an agreement to have them come in the spring and fall to service my air conditioning unit. The owner was also easy to get in touch with, and I would recommend this company to other people.

Description of Work
They had replaced the evaporation coil on the air conditioning unit and replaced some duct work originally. When they did this, they used tape to join the two, the evaporation coil unit and the motor, together. The tape came off. They came back out to fix it and I was satisfied, but they charged me a trip fee. I called Mr. Caputo because they had caused the problem in the first place, and he sent me a check the next day to refund the trip fee.

Three months ago I had this company do some pretty extensive work on this A/C unit, including replacing ductwork which was filled with mold and the leaking evaporator coil, at a cost of $3,550.00. That job took approximately 3 days, during which time the A/C was disconnected. Since that time, the A/C has slowly been cooling less and less. My tenant inspected the unit and noticed that the tape joining the evap. coil to the motor unit had come loose, and practically all the cool air was blowing out into the closet where the A/C unit is located. I was shocked that: (a) they had used tape which was ineffective and (b) that they had not rewrapped the (I think) condensation line when they did the original work -- it was obvious that the rubber was cracked and flaking, and in one area the metal line was exposed and was wet. I have no idea whether they would have replaced the tape with the higher quality mastik tape if I had not known that was the appropriate product to use. (I discovered this from another a/c company which my home warranty company sent out). I felt that I had to tell them what steps to take to solve the problems. They didn't charge me for the new tape, which is expensive, but I was charged another $69 trip fee, I guess because there were other issues besides fixing the one they caused in the first place. I did get a 10% discount because I have a maintenance agreement with them, but I noticed on their Angie's List profile that they give a 10% senior discount, which was not offered and I didn't know about. The company's rep., who did the work, was very nice and trustworthy, and neat. These qualities are very important. Further, I don't blame him for the use of the cheaper tape - I feel he was following company policy.

Description of Work
This work was done at a condominium unit which I own. It is approximately 23 years old, and is rented to my daughter. They retaped ductwork to the evaporator coil with mastik tape. Removed old insulation on what I think is a condensation line and replaced it with new Rubetex (?) insulation and sealed it. Condensate drain from a second A/C unit was leaking into the basement from the crawl space, and it was repaired. Also we had a leaking icemaker line, which we wanted disconnected. They did that, and replaced the cut-off valve which was just worn out.

They came and did a good and efficient job. We do not have to hire much work because we do our own. They did clean up behind themselves. We would recommend them to other people.

Description of Work
They replaced a fan motor on a air conditioner.