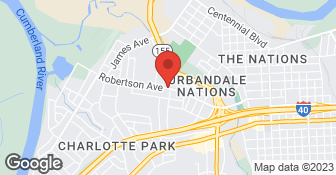 On August 22, 2014 we signed a contract and gave Mark Tant a deposit to build a pool house. We had hired and architect to do drawings. At the point of contract Mark Tant said we did not need construction documents as it was a simple structure to build. His contract stated that he would finish in 3 months. It took him until 5-29-2015, 9 months to complete the project. That after removing items from his contract that we knew he could not complete successfully. Framing had to be redone and adjusted 3 times. The roofer came and went away for months. They had to redo the installation of a simple pocket door and the screen door. Tant blamed all his delays on trouble getting subs to show up. Many a sub showed up with no drawings showing them what to do and Tant's supervisor was rarely on site at the beginning or end of the day to start the work or assess the progress. We did most of the cleanup in order to not have nails and other debree in the yard. He received shop drawings for a special awning, never reviewed them, and when it showed up on the site, adjustments again had to be made as it was too large for the building. Without my husband's constant supervision the electrical installation would have been a nightmare. As is, we are redoing wrongly installed outlets. Do to his lack of attention the pool which was to be finished by Thanksgiving 2014, is just now, June-2015, being finished. If you check his Facebook page you will see projects that he was doing with his subs when he was supposed to be working here. He has blocked and removed any negative comments from Facebook. I have spoken to another local family that experienced an even worse nightmare at the hands of this builder and both of us would be willing to discuss our projects with anyone contemplating hiring this contractor. Additionally I documented in writhing and in photos all the delays and errors during the 9 month nightmare.

[Removed Member Name] has set out on a mission to try and bash our company for a very poor build job and she is incorrect in all areas of her comments. The Tant Companies LLC did everything possible to try and make this customer happy during the entire construction process even though she was bashing me and my company for no apparent reason except taking longer than we all wanted due to an extremely harsh winter and rainy season, she even fired the architect early on because she did not like his rendering. The pool house was completed and the contract full filled, her husband [Removed Member Name] was great to work with while [Removed Member Name] refused to talk with me face to face about her issues and [Removed Member Name] has been known to make several false and abusive statements to everyone involved in her project including The Swimming Pool Doctor. The amount of this project listed is also incorrect as the pool house project only ran 53,000. The Tant Companies LLC strives to provide a very high quality product and stand behind everything we do, and if any customers have issues we are more than happy to address ther issues.
5.0

Mark and Jason gave me a great estimate and stuck to it. Had the materials delivered the day before and Jason was on scene to ensure that my yard wasn't damaged. The fence was being erected next to where some 40' pine trees once lived. So digging the holes for the fence post was very difficult. Rocks, roots and clay did not slow them down. I am the proud owner of a plumb beautiful fence. I would recommend these boys with out hesitation. I also learned that Jason is a Nashville Firefighter too, just one more reason to want the Tant's for your job.

He is honest and does good work. He is dependable. We had some timing issues. His pricing is average.

Description of Work
The Tant Companies LLC is doing general remodeling work for me except for painting and plumbing.

We specialize in handyman services, home repairs, home improvements, TV mounting, and more! We guarantee your satisfaction, and we won’t leave until the job is done right. We pride ourselves on the quality work we provide, while delivering great customer service! Check out all the services we offer below and call -or- click to schedule a free estimate today!  …

How is The Tant Companies LLC overall rated?

The Tant Companies LLC is currently rated 3.7 overall out of 5.

What days are The Tant Companies LLC open?

The Tant Companies LLC is open:

What payment options does The Tant Companies LLC provide

Does The Tant Companies LLC offer a senior discount?

No, The Tant Companies LLC does not offer a senior discount.

Are warranties offered by The Tant Companies LLC?

No, The Tant Companies LLC does not offer warranties.

What services does The Tant Companies LLC offer?