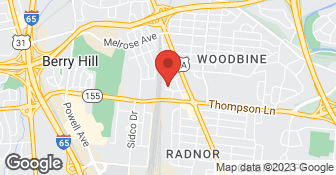 WORK ALL OF TENNESSEE AND ARE LICENSED IN FOUR OTHER STATES. SERVICE DEPARTMENT CAN HANDLE CALLS LARGE OR SMALL. ESTIMATERS FOR LARGER PROJECTS BOTH COMMERCIAL AND RESIDENCIAL. ADDITIONAL PHONE - (615) 352-3689....

Excelling in customer satisfaction, Honest Improvements takes general construction and handyman projects to a whole new level. Professional, reliable service offered on EVERY JOB no matter the circumstances. From updating those old fixtures and faucets to pouring that concrete patio, Honest Improvements has you covered. No job to small and few jobs too big.  …

Sullivan Home Service has been serving the Middle Tennessee area since 1992. Steve Sullivan takes great pride in his craft and has a lengthy career in home restoration and remodeling in many of Middle Tennessee's finest homes. Please call (615) 593-7394 for the quickest response. From a honey-do list to a complete kitchen remodel, he does it all. Every home needs a handyman. Let Sullivan Home Service be yours! **Proud winner of the 2013, 2014, and 2015 Angie's List Super Service Award**  …

We have the experience and dedication to get the job done right! Specializing in Handyman services; We guarantee your satisfaction, and we won't leave until the job is done right. We pride ourselves on the quality work we provide, while delivering great customer service! Call or click for your FREE estimate today!  …

It went well. I've had used them on the past.

Description of Work
fixture. They replaced the batteries in our smoke detectors.

any that if they kept the service call at $78.00 they would go broke. He also stated that it was his idea to raise the service call price. I explained that I had used the company a couple of other times in the past and asked why I wasn't notified of the service charge increase. He told me that the next time I called he would quote me a price. I won't be calling again. By the way, this electrician today picked up all the trash and cut wires that a previous electrician had left behind.

Description of Work
We had a bathroom vanity installed. The workers were here working approximately 45 minutes. My bill was over $193.00. I called the company and spoke to Devron. I told him that we had used this company in the past for a lot more services and a much better price. Devron told me that the service call for them to show up is $143.00 and that it used to be $78.00 up until January 2013. Devron told me that he himself told the comp

They did a really great job and and they contacted me faster than any other company I called. They got to me quickly and it only took them over 2 hours to complete the job. Chris and Tom ran into the bracket fitting originally but they were able to resolve it and got it installed.

After a power surge in our neighborhood caused damage to several homes including ours, I contacted A&F to assess and repair the resulting problems. The day after I called, they sent two young men who worked diligently to get everything functioning again. They were courteous, professional and knowledgeable. I felt that A&F Electric was responsive and professional and that their charges were fair.

Aand F said Aaron was available and they'd send him right over. He arrived within 20 minutes. Within half an hour he diagnosed the problem, which turned out to be a couple of improperly wired light switches. He redid the wiring and everything now works perfectly. He was there approximately one hour. They charge by the hour, and it's $78.50 for the first hour. I was impressed that they came so quickly and were able to successfully diagnose and solve the problem.

Description of Work
We replaced all the electrical outlets and light switches in a recently purchased condo in order to update the look. All went well until the last room. After replacing the outlets and switches there was no power to the room. After some unsuccessful DIY troubleshooting we called A&F Electric.

Prompt, friendly, professional service. May have found my electrician of choice for other projects.

Description of Work
I had a circuit cut out on a Sunday morning. They called back and had someone out in about an hour. The service man quickly diagnosed the problem and made a quick fix restoring service to the circuit.

They were very good and timely. I am going to hire them to do the work.

Description of Work
I used A & F Electric Company to quote on an upcoming electrical project.

We called A + F due to the great reports on Angie's List. I spoke with someone to schedule an estimate and they let me know they wouldn't able to do that (on a Tuesday afternoon?) until the next day. They returned my call on Wednesday and scheduled an estimate for 8 a.m. on Thursday. Thursday we received a voicemail message from A + F at 7:30 a.m. notifying us that they were running "a little late" and wouldn't be able to come until closer to 3 p.m. Nearly 7 hours later 2 men came by and did a quick, brusque walkthrough. They started shoving wires through holes in the wall back behind drywall (without asking what our plans for the wires were), tried to help themselves into the house by opening the garage door themselves, etc. I found it all quite strange. They let me know that they'd call me back on Friday morning with an estimate. Here I am, 5 days later and I have yet to hear back from them. Thankfully, we found quality service elsewhere, but I would have liked to have more options to choose from.

Description of Work
None

Two guys came out and fixed the fixture and inspected the panel. Did a good job but it was unbelievably expensive!! Did they need to send 2 guys to fix a light fixture? It was $280.00 and I should have just bought a new one. They looked at the panel, but didn't change anything or do any work on it. Won't use them again.

Description of Work
I had a light fixture that needed repair. Also wanted my electrical panel inspected to get an opinion on safety.

They were nice guys and offered me good advice on some other jobs I had in mind. They located the problem right away, replaced the outlet and that was that. I would use them again.

Description of Work
This was a small job. I lacked power in my outside carport storage area. They found the problem instantly--an outlet had to be replaced. He had one on his truck and replaced it.