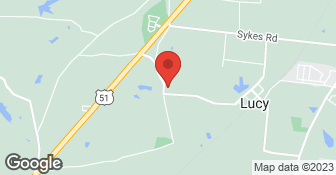 Super Service Award winner from 2011-2019! We have been providing quality work in the Memphis area since 1975. We specialize in interior and exterior painting for residential and commercial properties. Our painters take pride in providing top quality services and attention to detail. We are also skilled in all types of carpentry work as well as other various home maintenance needs. Customer service is our priority! We are your one-stop shop for your next home maintenance project. Because we use the highest quality paint and materials from Sherwin-Williams, we are able to continue to perform Exterior Painting in the WINTER. Call today to schedule your appointment.  …

Byron Rogers Painting will provide top-quality Interior and Exterior Painting. We are licensed and insured. All our employees pass a background check and are experienced.  …

My husband and I inherited my father's house after he passed away and we need to have some repairs done to it so we can have it listed on the market to sell. We wanted to get several different estimates (which we have every right to do). My husband contacted a total of 4 different people from Angie's List and set up appointments spaced approximately an hour apart so that I could be over at the house the best part of 1 day to meet with them and go over what all needed to be done. Apparently, there was some miscommunication between Mr. Keith Avery and my husband about the time of his appointment. My husband told me that Mr. Avery was supposed to meet me at 1:30, so when it got to be around 1:45 and I did not see or hear from him, I got on the phone and called and told Mr. Avery who I was and that my husband had talked to him the day before and that I was supposed to meet with him at 1:30. Mr. Avery said that he told my husband to tell me that and quot;Iand quot; was supposed to call him when I was headed over to the house and he would see when he could meet me there. Anyway, he said that he could meet me at the house in about an hour or an hour and a half. Well, I was in the process of finishing up with another very nice man from Angie's List when Mr. Keith Avery arrived and knocked on the door. I asked if he was Mr. Avery when I opened the door and he said and quot;yesand quot;. Since I still needed a few minutes to close out my appointment with the man that I was talking with, I very politely apologized to Mr. Avery and asked if he could give me just a few minutes, and he immediately spun around with his back to me, started walking off and GRUFFLY said, and quot; NO, I DON'T DO THATand quot;. Well, needless to say his behavior and response left me and quot; stunnedand quot; for a few minutes. I felt like I had been slapped in the face. I just said, and quot;thank youand quot; and closed the door. I think what happened, is when Mr. Avery pulled up to the house, he saw the other man's truck that had his business name on the door and realized he had some competition. He was already mad before he got to the door. There was absolutely no reason for him to be so rude. It made me realize that I was glad to have seen this side of him before I chose him to do any work for us. I definitely would NEVER use his services - EVER because of his attitude !!!!

Description of Work
He did NOT provide a service, we only had an appointment to meet to discuss what he would charge to do some repair work for us.

The son came out, measured the length of the columns and gave me quote. I will say, he did tell me I was given the wrong dia. cap and base. When I called to set up an appt, we agreed upon a time twice, but he never showed. I finally ended up doing the job myself and saved money.

Description of Work
They did nothing at all. I called to get a quote to replace 2 wood porch columns with fiberglass.

I do apologize for the inconvenience but my father was in the hospital during this time and then passed away on February 6th. I would love to have another chance should the opportunity arise.
4.0

Mr. Keith Avery and I got off to a rocky start. I had concerns about what I saw early in the process, which I called him about and documented with photos. He felt I was challenging him and became very defensive. No contractor should never speak to a client the way he spoke to me. In the end he promised the work would be A+ quality. That's all I wanted, the same level of quality I had perceived from the other reveiws. The 2nd day I was a lot happier with what I saw. I gave them their space to work and we didn't talk again until the job was done. It looks good now, overall. The painter did an excellent job. I had hoped for better cleanup of the site, however. There was debris left on the roof and scraped paint and lots of nails and small screws in the yard (I had to buy a large magnet bar and quot;sweeperand quot; to clean them up). I was told the rain would clean off the roof, but I feel it should have been swept off. When Mr. Avery and I spoke again, we were on better terms.

Description of Work
Replaced (where rotted) and painted exterior trim and replaced and painted porch posts.

Mr. Keith Avery came to my house at my request for an estimate. He was friendly and professional. He pointed out some areas that were potential trouble areas and indicated how he would repair them to prevent the problems in the future. He and his works were prompt, polite, and professional. They completed the work in a timely matter and to my satisfaction. I would use Mr. Avery and his business associates again.

Description of Work
Repaired and painted exterior of house and tool shed.

They were great. The outside of our house looks great and the reworked cabinets fit right in with the rest of the kitchen. Keith was able to a quick estimates and they we able to accommodate my schedule for the kitchen remodel. They were pleasant workers to have around and were not intrusive.

Description of Work
Keith and his workers replaced exterior wood and siding on our house. They reworked some existing kitchen cabinets so we could fit a countertop and appliances and did some interior painting and wood work in our master bedroom.

I was approached by a contractor canvassing the neighborhood after a hailstorm for possible roof damage. With my insurance his estimate would have cost me about $5000 out of pocket. I had called Avery and Sons separately about replacing rotting columns on the front porch. During his inspection he told me he also replaced roofs and asked if I would like an estimate for that, too. His estimate was much lower and he showed me he was going to use the same materials and would be more responsive if anything was not to my liking. I went with Avery and Sons for price and responsiveness. Mr Avery was pleasant to work with, flexible to my schedule and had a great roofing crew. We actually enjoyed having them around. They cleaned up meticulously each day, were polite, and left the yard spotless after the job. We are very pleased with the quality of the work, the color of the new roof, and (perhaps best of all) the price which was almost exactly what the insurance paid. I have never had a roof replaced before, but I cannot imagine a more positive experience. I would highly recommend Avery and Sons for roofing work. The original reason for my call was to replace old columns. Mr Avery worked with us to select very similar looking fiberglass replacement columns which will never rot. They look as good or better than the original and they even matched the paint exactly.

Description of Work
Replaced the roof on the house and shed. Also replaced the porch columns, which were rotting.

The repairs that Mr. Avery did was on a house I was preparing to put up for sale. There were multiple things that needed repair and each was addressed to my satisfaction.

Keith and crew did a very good and neat job. He was flexible in dealing with changes that we requested as the project went along. It turned out to be everything we expected. We plan to use him again in the future for any other repair work.

The job over-all was excellent. The crew arrived on the 7th and finished on the 9th. They worked full days from 7:30 am to about 5pm. A reroofing job is messy to say the least. We were very concerned with nails in the back yard due to the close proximity of our pool to the house. Kenny's crew put tarps down to reduce the mess in the grass and to help keep the nails and other debris from the yard. The job went smooth and thank God there was no rain during the three days. They removed the old shingles, re-felted and applied the ice and rain barrier as contracted. The crew was professional and did not ask for anything. As far as mess goes I thought they did a great job keeping it to a minimum. They removed debris daily and use a magnete on the ground when complete. Kenny was attentive and always responded immediately to any questions or concerns throughout the entire job. After the roofing was complete, Kenny came with a final cleanup crew on the 10th. He personally inspected the roof and the grounds and ensured I was happy with the job. Once again they were fast, Clean and professional.The roof looks great and I'm looking forward to many years of worry free rainy days and nights.As stated above I dealt with Kenny Avery exclusively. I highly recommend Avery and Sons and will use them again

Description of Work
Contracted Avery and Sons to replace our roof. Dealt with Kenny Avery exclusively. Services to be provided:Remove old shingles, inspect decking, replace felt as required, apply ice/water barrier in all valleys, re-shingle using owens-corning architectural 30 year shingles, re-seal all roof vents. Contractor responsible for all removal of old materials and clean up. I also had them install an additional roof vent for one of the upstairs bathrooms.