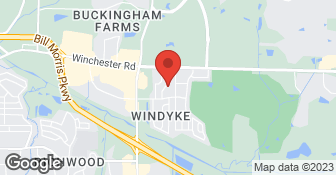 After purchasing our house we were excited about the idea of having the whole bottom level being stained concrete, however this whole experience has been one problem after the next. We originally hired a different contractor to just stain our floors without putting down an overlay. It turned out horrible. After getting some bids from other concrete contractors we decided to go with Stovall because we believed he had the most experience and integrity to complete the task to our desire. We still weren't living in the house yet so it was a great time to get all the work done. The group put the overlay down and stained the concrete within approximately 2 weeks. I was upset to find that the overlay that they laid down did not make my floors level as i had originally been led to believe. A second problem was that the texture of concrete overlay in the kitchen was not smooth as the rest of the house. A final issue was that there were sharp raised areas around the doors and in the closets were chips of concrete were not vacuumed up and stained over. These chips tended to break off taking the stain and polyurethane with them creating small divots that have to be patched. I relayed all my concerns to Mr. Stovall who was very nice stating that all could be fixed. A month later the guys came to make the repairs. They informed me there was nothing that could be done about the unlevelness but they could redo the kitchen. I was reluctant to even have them complete this but i was reassured that it would turn out better. After having them complete this process again, we were again upset that the stain in the kitchen could not be matched and that there was dog hair in the polyurethane finish. On top of this, the polyurethane finish was peeling up off the floor. They came back again to fix the polyurethane and it began peeling again. I WILL NEVER STAIN CONCRETE AGAIN, but will simply go with tile or hardwood.

Description of Work
Had the provider create a concrete overlay for the whole bottom level of my house which was originally carpet, tile, and hardwood-then stain and polyurethane the concrete.

Our company has responded to every concern by this customer., and stand ready to do whatever else he requests. One concern about levelness of the old slab was never mentioned before the work , during the work or or 3 to 4 weeks after they moved in. The micro top that was ordered is made to micro coat not level slabs . But we have offered to do additional leveling work if ordered. There are companies that do slabjacking, but it It was never mentioned because even the customer didn't notice it for a long time ( The "led to believe" part concerned little pits in the floor, a separate problem that the micro did satisfactorily fix. . The sealer is not peeling , there is one spot about the size of a cup that water collects from under the slab, very unusual, maybe a broken pipe . we will fix again at no charge, after the water problem is fixed.. The real problem is that the customer is not a concrete floor person. Normally I qualify people as concrete floor persons or non-concrete floor persons.. But this job came at a different angle because we were asked to fix a big problem caused by another company. A concrete floor person would love this floor especially the beautiful kitchen. Concrete floor people describe these floors as "full of character", "non factory looking", varigated, "mottled", etc. . Maybe the customer will love these floors after he gets over the buyers' remorse and can then see the beauty. I hope so. He is still our friend and we will help him as best we can.

In Business Since 2021 We take great pride in our experience, expertise, quality, and customer service that we provide to meet the consumer's needs. It is our mission to provide excellent workmanship and complete customer satisfaction from start to completion of a project. In order to understand the needs and expectations of our customers, we take great care to work and communicate with every customer in a professional manner. Our reputation is based on service, safety, and quality, regardless of how large or small the job.  …

Xtreme Clean Inc. has been cleaning homes & businesses with over 10 years experience. Our uniformed professionals arrive at your home ready to take care of your cleaning needs, bringing with them all the supplies and equipment needed to make your whole home "Xtreme Clean". Over the years we have built great relationships with our clients and hope to build that same bond with you. Your services include a free in-home estimate, so let us know everything on your list, and more. From thorough kitchen and bath cleaning, to dusting base boards and emptying waste baskets, Xtreme Clean can cover it all. "Our company is built on quality, integrity, and excellence". Additional contact name - Melody. Additional email - jobs@xtremecleaninc.com .  …

Harris Landscape & Design is a premier full service landscape company. HLD specializes in custom masonry and concrete services. We also prices detailed 3D designs complete with 360 degree views and video pictures. HLD wants to take your project from start to finish and give you the landscape of your dreams.  …

Bonded
Insured
All statements concerning insurance, licenses, and bonds are informational only, and are self-reported. Since insurance, licenses and bonds can expire and can be cancelled, homeowners should always check such information for themselves.To find more licensing information for your state, visit our Find Licensing Requirements page.
General Information
Free Estimates
No
Eco-Friendly Accreditations
Yes
Payment Options
Check, MasterCard, Visa
Warranties
Ask for details

David Stovall & Associates Inc is currently rated 3 overall out of 5.

No, David Stovall & Associates Inc does not offer warranties.