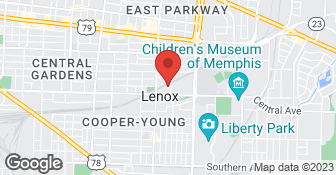 When pests or termites move in, you want the ultimate weapon to take them out: Terminix, America’s leading provider of termite and pest control. It's no wonder more than 2.7 million customers trust us to protect their homes and families from the havoc that unwanted intruders can create. You can look to us for a wide range of services to protect your home top to bottom, inside and out: Insulation Service, Moisture Control Solutions, Rodent and Wildlife Service and more. We can even help you win the fight against the bite with our revolutionary Mosquito Service. Don’t trust your home to just anybody. Go big. Go strong. Go Terminix. Protector of home since 1927. ...

We are an owner operated company, specializing in routine lawn maintenance including: mowing, trimming, weed-eating, blowing off debris from property, and edging (upon request)! We guarantee your satisfaction, and we won’t leave until the job is done right. We pride ourselves on the quality work we provide, while delivering great customer service! Check out all the services we offer below and call -or- click to schedule a free estimate today!  …

Safari Lawn Care was started in Memphis, Tennessee as a family business. We take pride in the service we provide to our customers. By using the best materials, employing knowledgeable service technicians, and communicating with our customers, we have created the premier lawn and garden service in the city. Your satisfaction is ensured by free services in between scheduled applications as necessary. Lawn Fertilization & Weed Control, Tree & Shrub Fertilization Please mention Angie's List and call our office to schedule: (901) 387-0990  …

Dart Pest Control was established in 1971. It is family owned and operated. We are licensed in Tennessee for termite nad pest control and licensed in Mississippi for Termite control. We offer monthly, quarterly, and one time treatments for pest control services including roaches, ants, crickets, house spiders, mice, silverfish, earwigs, spring tails, wasps, bees and more. We offer liquid termite agreements as well as Termite baiting system. We offer soil treatments on new construction.  …

I have an annual contract for service. They explained the chemicals used and services provided.

Thank you for sharing your Terminix experience! Please do not hesitate to contact us should you need additional assistance at 1.844.251.2164. Thank you!
5.0

I'm on an annual contract with them.

Thank you for taking the time to review your recent Terminix experience. Please do not hesitate to contact us if you have any questions or need further assistance. Thank you. -Lisa O.
5.0

They were good. If I didn't like them, we would not be using them. They are good about letting me know when they are coming and when they will be here.

Description of Work
They did our pest control.

The price seems a little high. We are still using them.

Description of Work
They do our pest control.

They had to come back out. It is a quarterly thing. They come out about every 3 months. Their termite is okay, but they need to step up their pest control. They are not good about coming back unless you call. I pay for a year. I think they are overpriced for the work that they do. If someone asked me about using Terminix I would tell them to look around. In the future I will use them for termite service, but I don't think I will use them for pest control.

Description of Work
I have both their termite and their pest control.

I have been Terminx for about six years. I know the guy that comes. They are always on time and always call ahead of time. They are in and out.

Description of Work
I use Terminix for pest control.

Tripp showed up right on time at 9 AM on a Saturday morning and explained what he planned to do first which was inspect for termite activty. We had not seen anything but part of the annual contract stipulates that there can't be any pre-existing termite activity. This was completed quickly and then he started applying a completely odorless pesticide in spot areas on the house interior. He then used a different product on the exterior....in the rain while it was almost 90 degress outside. He also used the product in the storage area off the carport and in the back yard where there is a tool shed. He explained everything he'd done when he was finished, after spending almost two hours at our home, and, to allow a week before calling in the event of any new insect activty to allow the products to work. We couldn't be happier and Tripp couldn't have been nicer, or more professional.

Description of Work
Inspect for termite activity and treat property for pests.

They come when they said they were coming. They gave you a phone call to tell you that they are coming and set up an appointment. They follow through on the appointed time.

Description of Work
We use Terminix Collierville. They have a contract with us and we use them on a contractual basis. They charge $200 every three months.

Recently bought a house which passed termite inspection on purchase without a problem. When I called Terminix upon having ownership of the house, they took my name, address, phone, and stated the termite annual contract was good for another 8 months, they will sent me renewal notice when the time comes. I was pleased with that. When we called Terminix to come inspect the house about 6 months after taking ownership of the house, the inspector showed up, surveyed that there is no obvious damage, but termites are in the area. When I inquired about treatment, he stated that they would be happy to do it, but the contract expired. They could not trace my phone calls and Terminix inspector could not verify any of this - even when I had paperwork of previous contract. My conclusion was that Terminix is scamming new homeowners with this approach. By simply allowing previous owners policy to expire and having us take a new contract, they are getting rid of their own liability for previous contract. This is dishonest and unethical. DO NOT USE SUPPORT SUCH SCANDALOUS BEHAVIOR.

Description of Work
Inspect the house for termites.

Description of Work
Inspected in & under house for termites, treated under house, installed anti-termite plugs throughout yard.