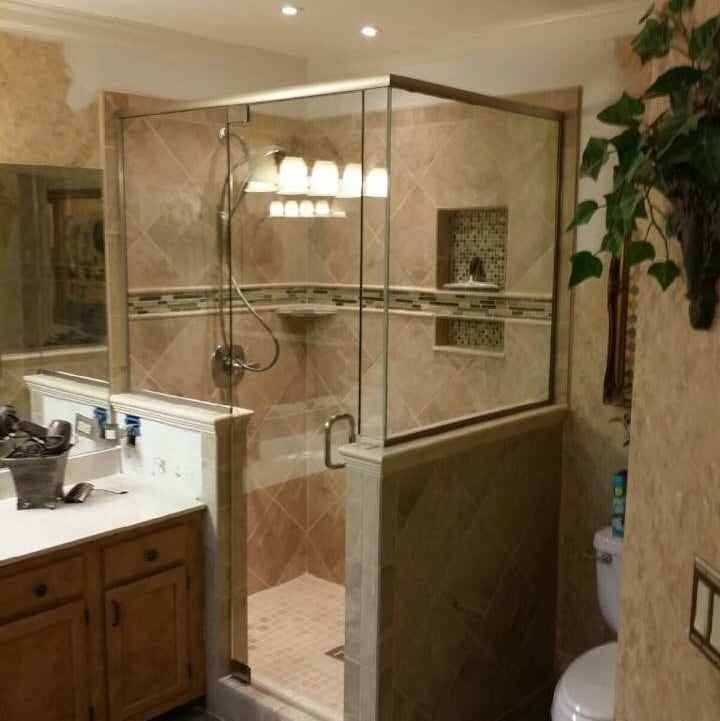 We are a complete home repair and remodeling company as well as a handyman service. We install windows and doors, paint interior and exterior, remodel full bathrooms, repair rotten wood and termite damage repair, install ceramic tile and laminate flooring. We are insured, licensed, offer great discounts and give free estimates within 100 miles. We are a family based company so our customers are our priority

The work was the highest quality, prices were incredibly reasonable, Matt did more than what was contracted for the job, and the entire crew were total professionals. Absolutely the only handyman I would use for any job.

Matt and Heather did an awesome job. They hand crafted and stained the 12 cedar shutters, stained the 8 6X 6 cedar shutters to match shutters. They installed bead board across our entire porch ceiling and painted it haint blue, looks amazing. They previously repaired a bunch of rotted wood and repainted to match house color. I would definitely recommend them for your home projects. Great work at reasonable prices.

Matt and Heather are excellent workers. They replaced all doorknobs and hung new light fixtures , repaired and replaced ceiling damage and painted the interior of my home. I would highly recommend them to anyone looking for a major remodel or minor handy man services !

Description of Work
Updating Inside of Home

S&M Customs is a great company and I absolutely lucked out! I entered my information on Angi's List and received a call from Matt Page within 15 minutes. He came out the very next day! He was on time (a little early which was nice), very nice and extremely thorough. He completed all of my projects on time (early) and did a fantastic job. I would absolutely recommend S&M Customs and will surely hire them in the future!

Matthew did a great job. The snow and cold caused us to reschedule but all work was done quickly and professionally. I would definitely use S & M Customs in the future.

My room addition looks AWESOME thanks to Matt Page and Heather of S&M Customs. It was a pleasure working with them because they were professional, knowledgeable, helpful, timely, thorough, affordable and likable. I could have never imagined how beautiful my room addition would turn out. I definitely plan to utilize the services of Matt Page for future projects!! Thanks guys!!!

Thank you for the review!!! It’s been a real pleasure working with you guys.
1.0

Never responded to my request for a quote

Our bathrooms look great and our kitchen floor is well done. Matthew is very knowledgeable and capable. He had a lot of information and advice for our projects. I would hire him for any project. Good, fair, and reliable.

He cam over and looked at the job and never gave me an estimate. I have not heard from him at all. hired another contractor and the job is now complete...plus some other work that I wanted done.

EXCELLENT--very smooth without any problems.

Description of Work
He connected my new appliances--stove, washer and dryer. removed the old ones.

Nor well. Did not show up for appointment. Nor did they call

Description of Work
Did not show up for appointment.

Are you sure you have the right company? I’ve never talked to you.
5.0

Matt was a pleasure to work with! Prompt, courteous, left the working area clean. I couldn't ask for more.

Thanks Top!! I really appreciate the review. It was a pleasure working with you.
5.0

Matt and his assistance did a great job.

I recently hired S&M Customs to restain my deck. Matt did an excellent job. He showed up on time to give the estimate. Job started and ended when he said it would and got it done for the price he quoted me. It also looks fantastic. He had replaced a window for me a few years ago and he exceeded my expectations again. Definitely plan to use again.

It went great. All work done as requested...the ceiling in the porch far exceeded my expectations. They will be coming out later this year to paint all the trim on the house, as well as all the doors and shutters.

The various projects have run very smoothly, from start to finish.

Description of Work
Matt ripped out our old kitchen backsplash, patched in drywall where needed, and then retiled the backsplash. His attention to detail and making sure things were done right, was obvious. We also had him repair walls and ceilings, then paint a large 2-room bonus area/game room over the garage. Top-notch work. We brought him back a month later to paint and repair a lot of first floor trim work. And finally, he'll be back in May to renovate a guest bathroom which will entail demoing the old vanity and mirror, repairing walls, installing new tile and vanity. He shows up on time, has a very nice helper, and they keep their work area clean. You hardly know they're in the house working!

Thank you so much!! It’s been a real pleasure working with you.
5.0

Matt did a fantastic job ripping out old backsplash, repairing walls, and installing new backsplash. His attention to detail was awesome. He really makes sure the job is done right. Also had him paint upstairs game room and again, top notch work.

Matt expertly removed the equipment, patched up the holes left from original installation, sanded and painted. Top-notch effort and I can’t see where the work was I done.. he did a fine job of making the work area look like there was never anything previously installed.

Thank you for your review. It’s been a pleasure working with you!!
5.0

It went perfectly. He was on time, did the best job ever, cleaned up afterwards. Will definitely use him again and wii recommend him to others.

Description of Work
Ceiling repair, painting in a gate area

They were great. Always on-time and professional. We are more than pleased with the work completed and continue to use them. We almost didn't want to write a review as we want to keep them to ourselves as it is so hard to find good people in Memphis! Highly recommend them.

Set an appointment with Matt for an estimate on repairs at a house I own in Memphis. Set the appointment on a monday for that wednesday at 4:30. He asked me to text him my address and I said I would call him wednesday prior to the appointment to confirm. I called him on wednesday ,he said he was just leaving another customer's place , but that I had forgotten to text him my address . I said no problem, I would give it to him then. He then hesitated and then said he wouldn't make it before I even gave my address to him ,despite his knowing in which general neighborhood he needed to be, as per our conversation monday. Did not give me a reason . When I asked , he mumbled something about just leaving a customer's place . I think he just didn't feel like doing the work. My time is valuable and I am very busy .In fact, I flew in from out of state to take care of business on this house . I try not to waste my time or other's time and do what I say I will ..general grown up professional respectful stuff . Then he says he could come out the next day at 4. I thought that not having my address texted to him as opposed to just giving it to him then was not a valid reason to cancel . As I've said ,he knew my general neighborhood from our conversation monday and understood where he would need to be and when regardless. Gave it another chance anyway ,changed the appointment to the next day at 4. Texted the address as soon as we hung up confirming date/time as discussed. He never showed up ,never responded to my texts or answered the phone . His name is Matt .He is unprofessional, unreliable, and disrespectful .A complete waste of a week of my time trying to set up an estimate. It gives me a pretty good idea about the issues I would have had if I had hired them and this is a very lengthy expensive project . I would never recommend a company with this kind of service,or lack of it.

I apologize for the miscommunication. I’m looking into why there are different contact numbers for my company. I never received any texts from you.
5.0

Matt was great to work with and did a great job. I especially like the fact that Matt self performs all of the work with the assistance of a helper - he did not subcontract any work to others or work with a large crew. His pricing was fair and he finished the project in the time frame that he gave at the beginning. I recommend him highly.