Flooring Sales and Installation
Fencing
Electrical
Drywall
Concrete Driveways
Decks and Porches
Countertops and Backsplashes
Concrete Pouring and Repair
Ceramic Tile
Carpet Sales and Installation
Unfinished Carpentry
Licensing
Bonded
Insured
All statements concerning insurance, licenses, and bonds are informational only, and are self-reported. Since insurance, licenses and bonds can expire and can be cancelled, homeowners should always check such information for themselves. To find more licensing information for your state, visit our Find Licensing Requirements page.
Business Details 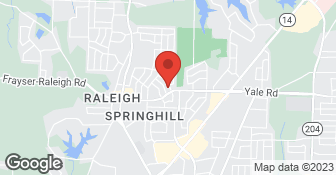 184 EMPLOYESS. NO SUBS. COST IS DETERMINED BY THE JOB. TRAVEL CHARGES APPLY. AFTER HOUR CHARGES MAY APPLY. MAY CONTACT THROUGH EMAIL. ANGIE'S LIST $200 DISCOUNT ON ANY JOB OVER $500....

For many years, Owner Matt Davis has striven to build a solid reputation as the Mid-South's most trusted repair technician. Air Doctors of Memphis is dedicated to providing quality service to the community. They believe that a reputation as honest and reliable service technicians is the recipe for success. To Schedule an Appointment, send us a request , or call (901)598-HVAC Free Estimates! TN LICENSE #: 61198.

Ron came to my home and talked talked as if he was the best in his trade. He pointed out every imperfection in my home and agreed to repair and paint- he pointed out things that I wasn't even aware of, saying that they would be fixed. I hired him without checking references (BIG MISTAKE). He provided no contract (I was dumb not to ask for EVERYTHING in writing). The work began within two days. I w...

DESCRIPTION OF WORK
Ron was hired to paint the entire interior of my home, to remove wallpaper, smooth walls after paper removal and prior to painting, to lower baseboards and repair damage to wall caused by the re-placement of baseboards, to install quarter-round and fill gaps. He was to paint all walls, and all trim, as well as some ceilings.

I'm really sorry you feel this way about our company . We drug test our employees every 22 days . Also I walked your whole house with you at the end of the job last may and at that time there was no mention of any problems at all with anything . I'm amazed almost a whole year later you mentioned this to me .I would of took care of what ever problem you had at the time . Also WE DON'T SUBCONTRACT a...
5.0

I contacted them via email and received a return phone call the next day. They came out approximately one week later to give me an estimate. He gave me a verbal estimate before he left and followed up with a written estimate in email about two days later. I assumed that painting my house meant painting my entire house such as doors and gutters but found out that was not included when we got the fi...

DESCRIPTION OF WORK
Painted entire of exterior of my home including front, back, garage door plus gutters and down spouts.

It went well. Ron showed up on time to give an estimate. The following week, he and his crew got to work. He even put the cat up (so that she wouldn't get out) when I wasn't able to do so. There were a few places that I've asked that the crew go back over, i.e., cutting in lines aren't straight. But Ron had no problem with that and has said several times that he wants to make sure that I'm happy. ...

DESCRIPTION OF WORK
Ron and his crew painted the trim in the entire house (about 3000 square feet) including the doors and windows. They also painted walls in the dining room, kitchen, sun room, office, guest room, hall way. They had to completely re-mud the dining room (due to an attempt at me creating my our 'faux' paint) and the half bath because of the removal of wall paper.

Mr. Brook went out of his way to make sure that the insurance company paid for all the damage instead of trying to get out of their obligations. Once that was done, he had at least 15 people at the house to get the job done, 2 of those 15 were designated to do clean up work only during the entire time. If I did not see it, I would have never believed it, but he had the entire roof taken off, put b...

DESCRIPTION OF WORK
The house in which I live had a tree fall on it as a result of a lighting strike. My insurance company sent out an adjuster (Bill Hazzard) who said that there was no "real" damage to the house and only offered approximately $2,300.00 for the "damage". I got Mr. Brook, owner of Pegasus, to come out and check up on the adjuster. Mr. Brook came out to the house and crawled in the hot attic for over an hour taking pictures and notes. He wrote a very detailed report and backed me up with the insurance company. Even thought it took almost 5 months of arguing with the insurance company, he never let up. He stopped them at every turn, and got them to admit that they had made a mistake, and the insurance company eventually ended up paying over $36,000.00 for the damage. He took the whole roof off, replaced it, and had EVERYTHING cleaned up in 3 days. This included decking, rafters, center beams, shingles, gutters yard work. I could not be happier.

Our job was supposed to have been a simple remodeling job but that was before they found the black mold in the entire bathroom that was due to a slow leak in a faucet. The job turned out to be a big one, but it was handled very efficiently.

DESCRIPTION OF WORK
Our bathroom had to be completely torn out and rebuilt due to black mold in the walls and floor. Our floor rafters were reframed. We got new sheet rock on the ceilings and walls. We replaced all of our bathroom fixtures including all electrical fixtures. The bathroom was retiled on the floor and surrounding the tub. We also got a new window installed.