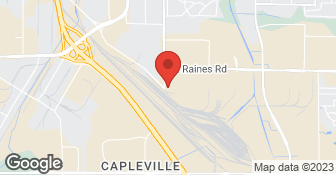 Award winning. James Pest Management is a third generation, family owned and operated pest control service provider since 1941.Servicing a four state area for commercial, municipal and residential pest management accounts from our home office in Memphis, TN and our Columbus, MS regional office. Our staff of over 50 are highly trained professionals with years of service and experience. Our business model: "give the customer the very best in services and they will be our best advertisement."...

Dart Pest Control was established in 1971. It is family owned and operated. We are licensed in Tennessee for termite nad pest control and licensed in Mississippi for Termite control. We offer monthly, quarterly, and one time treatments for pest control services including roaches, ants, crickets, house spiders, mice, silverfish, earwigs, spring tails, wasps, bees and more. We offer liquid termite agreements as well as Termite baiting system. We offer soil treatments on new construction.  …

You need a pest control company, the team at Erby Pest Control is here for you. We are a locally owned Pest Control Company serving the Mid-South Area. We have been in business over 15 years. We also have an A+ rating with the BBB and a proud member with the National Pest Control Association. Give us a call and become part of our family. 901-550-0204  …

Pest Control Service in Memphis by Pest Patrol, LLC. We provide Pest, Termite, and Ant Control, in the Memphis area and surrounding cities. We are the #1 Pest Control in Memphis.  …

Completely unresponsive (specifically Marge). Led me to believe that the scheduling had been done only to find out that it hadn't. Now I need to scramble for an alternative because the purchase agreement deadline is fast approaching.

They sprayed for the termites. When I called to schedule a visit, they put the manager on and he was very rude and unprofessional. He then claimed he would come out and check on the termites and he canceled day of. He made me fearful to have him in my home, and when they sent someone else out they never contacted me again. I called multiple times and was never met with a response.

Description of Work
They came out and treated for termites.

They set us up for a yearly inspection after that.

Description of Work
We used James Pest Control when we first moved. We had termite inspection done. It is something that you should do upon purchasing a new home just to make sure and they inspected it and prevented it.

We were under contract for pest control services with James Pest Management from the time we moved to Memphis in 2011 until 2015. The prior owner of our home used their services, and a sales person promptly contacted us when we moved in. He explained that they would protect our home from top to bottom from pests, including termite control, while we were under contract. We stayed up to date on all of our payments under the contract because they kept our credit card number on file and automatically charged all contractual fees due. There was no specific mention of exclusions from our contract coverage by the sales person, but as it turned out 3 out of the 3 problems we encountered while being under contract were NOT COVERED and we paid an ADDITIONAL CHARGE: (1) powderpost beetles (wood-boring insects) in our fireplace, (2) carpenter bees in our pergola, and (3) fruit flies in a kitchen that were spreading (actually there was no charge for the fruit flies because they just didn't treat for them; the technician explained that he did not have the necessary treatment in the truck and just gave me advice on "home remedies" for getting rid of them myself; he did not offer to come back with the treatment). Although these three events very much annoyed me, I did not cancel my contact with James Pest Management until there was a very upsetting incident that prompted me to speak with the owner directly. Not only was my concern mishandled (he did nothing about it whatsoever), but the owner treated me in a very bullying and disrespectful manner. Although the contract was canceled for cause, the services under the last contract for which I paid $290.00 were not fully performed and my contract fees were not refunded despite my attempts to obtain a refund.

Description of Work
We were under contract with James Pest Management from 2011 through 2015 for whole house pest control services, during which period we spent more than $1,500.00.

They did a great job. They arrived on time and were very professional and friendly. Would ABSOLUTELY recommend

They kept sending other people out to see the issue and they don't seem to be willing to make a commitment since it is not a standard house. We live in a log cabin.

(removed member name), You indeed have a log cabin with multiple issues and to best assist you we were getting as many “eyes on” your structure as it takes to help you solve your issues appropriately. You failed to mention that we are doing this at no cost to you. Please feel free to contact another pest management professional as you are under no obligation to our firm.
5.0

It's really outstanding. I use them all the time. They are always 100 percent professional and I've never had a problem on them. They're always on time and their service technicians are always courteous.

Description of Work
It was James Pest Management. That was for the installation annually.

They are supposed to inspect and spray for termites yearly. My problem is that when the tech came he only sprayed the outside. This happened twice. I was under the impression that my service was for a home inspection inside and out. When I called the office to find out if they would send Michael back out to inspect the inside, they told me that according to the law they only have to spray the areas that they are able to access. They do not have to inspect the inside is what the first customer service person told me. When the tech came we were at home but we did not hear him knock on the door. I explained to the office that I have a wrought iron door and the house is a two story house. If he had used the door bell we would have heard him. She explained that they had already been out twice and they would not be returning again. Until this year we never had a problem with this company. Perhaps it's me I'm just sharing my experience.

Description of Work
Sprayed outside for termites.

In September 2014 I requested an estimate for the termite, general pest, and mosquito services. The salesman who came to my home was pleasant and informative and answered my questions. Their termite service is quite involved and seemed thorough but I stated I was protected until sometime in early spring but I wasn't sure of the exact date. The salesman said it would be no problem to sign a contract now and let the person scheduling the service know as soon as I looked up the date from my old company when to begin that service. He put October as a start date but I stated I didn't want service then and he said just to let them know when they called, it was no problem. I began general pest service and was pleased with the thorough manner my home was looked at and treated and the technician was knowledge and pleasant. Around the end of Sept or 1st part of October I was called and let the termite schedulerer know what I had told the salesman regarding the early spring and to call me in January about an exact date. She told me that they had to do the service a month after the contract was signed which was not what the salesman told me. The next thing I knew, in November, I was being contacted by a Collections manger that I was in breech of contract for not having my termite service done in October. I explained to her what I had explained to the person who previously called and she would not hear anything I had to say, only I was in Breech of Contract for not having the service in October. The harassment continued through December and January so that I finally let my technician know I liked him and his services but didn't want to work with a company whose office staff was so offensive and combative and untrustworthy. I sincerely desired their services based on the reviews on Angie's List and am sure they do a good pest control job and had no complaints about the technician doing my general pest and mosquito work. But I found their office staff unprofessional and unpleasant and unbending. I discovered the reason I was encouraged to sign the termite contract even though I didn't need it yet was because they aren't allowed to come back and have me sign another contract at a later date. When discussing the issue with the head of the company I was called combative and basically called a liar without using those words when I kept repeating I wanted the service and I never indicated I didn't but was misinformed by the salesman in regards to how the termite service could be scheduled. I was treated unprofessionally and in a threatening manner from the moment I began explaining to the office staff what I was told by the salesman as to the date the termite service was to begin. The head of the company was insulting and offensive and apparently doesn't appreciate women who are bold enough to attempt to provide a picture of the circumstance that differs from what he understands as he let me know I reminded him of his ex-wife which was incredibly unprofessional. No matter how good their product was and how knowledgable and pleasant their technician that came to my home for 6 months was, the manner with which you are treated by the office and the apparent poor communication skills they have with their customers in the office, I would not recommend this company.

Description of Work
I requested service for general pest, mosquito, and termite protection.

Due to forthcoming legal action with this customer, we are limited to our response to [member name removed] allegations. Categorically, we refute this customer's allegations as erroneous, libelous and unfounded verbal misdirection of known facts; facts that are documented will be forthcoming to this site at the conclusion of the legal proceedings. James Pest Management is proud of our reputation for quality pest management service since 1941. We are blessed with a wonderful customer base and abundance of new customers referred to us by these customers. James Pest Management business model is "taking care of our customers", with honesty, fact based information, and customer oriented personnel at all levels. Unfortunately, we are sometimes challenged with individuals with unknown intentions as many other businesses would concur. We appreciate ANGIE'S List unsolicited ranking our company. This speaks volumes as to our reputation and integrity.
5.0

It was fine. The interactions were fine. They are professional.

Description of Work
I use them for termites. They sprayed the house.