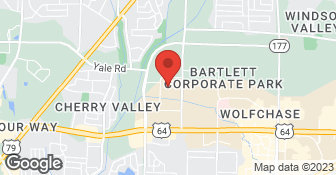 Servicing 52,000 customers per year with 75 employees. We use not sub contractors. Service calls are $79.95. Additional costs are based on national flat rates when available and when not, time and material....

With over 20 years of professional experience, we are your Heating & Air experts in the Memphis area. Contact us today for an estimate! Pre-cooling tune up for $54.99.  …

Choate's Air Conditioning & Heating is a Christian, family owned and operated business, established in 1958. For over 60 years now, the Choate family has maintained its core values of being Honest, Fair and Trustworthy - to treat each job as if it were their own home. Three generations later, Choate's Air Conditioning & Heating is well known for being the best at what they do. You can count on our Trained & Certified professionals.  …

For this simple 30 minute (or less) job, I was charged one hour and 30 minutes for a cost of $292.00 in labor. I was charged for a trip to one of the home improvement stores, to purchase materials because the tech claimed there was a leak in the hose, but I countered that I had checked already and the leak under my cabinet came from the faucet. He said he would have to go to Lowes to purchase a hose because he didn't have one that was long enough. The round trip distance from my house to the store is approximately 20 minutes + another 10- 12 minutes to get in and out of the store. The approximate time he was away was about 30 minutes. All of this, in my opinion, was to inflate the cost. I was charged for two hoses that didn't appear to be installed. I have no proof that anything was purchased because there was no evidence presented to me. When I later checked the hoses, I was able to feel moisture on one of the hoses after new ones supposedly had been installed. The cost charged by the company was $403.95. The cost of this small job was 4 times greater than the cost of the faucet which was $99.95. Total cost for this horrible experience was greater than $500.00. This is not the first time I've had problems with this company. I was a member of a home warranty group that contracted with them. This, however, is the first time that I have complained because this is "the straw that broke the camel's back."

Description of Work
To Have My Kitchen Faucet Installed

Took numerous calls to get contractor to come out at all. They came late. Then, having taken the filter out and cleaned it prior to them coming they refused to fix it. This is a regular filter that per the manual should be cleaned monthly.

The work were pretty fast in getting it done. They upgraded all my plumbing system and the code, and installed the water heater.

Description of Work
They replaced my water heater

Company was hired to replace water heater.Ran a new gas line and left it leaking when they left. It leaked for 2 weeks, we got sick/newborn was there. April 19 Greenway Services installed a tankless water heater and installed a gas line for it. When they left for the day, they did not check for gas leaks in the attic. 2 weeks later, after we had all been sick, we found out there was a natural gas leak in our attic which is over the bedrooms and bathrooms. They willfully and negligently left an unsecured connector of a natural gas line where it was able to harm us.Not checking for gas leaks after installing a gas line is reckless and could have been deadly. We called MLGW and they came and fixed the leak as well as sent the report to Greenway. I called the same day and they had a manager named Allie call me back. She was very nice but not helpful. As of today,c May 14 2019 she has informed me that since we called MLGW BEFORE Greenway then they are NOT responsible - uh I called MLGW because how was I to know it was THAT gas line leaking? Other than MLGW no one has been out & that is even more insulting than the cookies. As they did not perform the job correctly we would like at minimum a return of all labor charges seeing as how they made us ill and COULD HAVE KILLED US. The system was $5500. I do not feel we should pay the labor. Honestly I am insulted so much by their offer "to make it right" of 10% discounts on future services, a free AC checkup and a basket of COOKIES. They could have killed a week old baby. They rushed the job and got it done quickly because of my newborn granddaughter being there (one week old baby) but failed to secure a connection to the inside gas line and it leaked for 2 weeks in my attic. We could have blown the house up easily - the % of natural gas was 53% that is 520,000ppm! It only takes about 8% to light it!

Description of Work
Hired to install a tankless water heater

Description of Work
New control board on furnace

Nearly three weeks later and we are still waiting for a repair person, who may not show up like last week, and Greenway had the nerve to tell us they couldn't get anyone to our home until later in the next week. This is not our first incident with them, but we have to use them as they have a contract with American Home Shield. In our previous home, Greenway could not handle the problem and we had to get Sears to resolve the issue. Score: F-, or on a scale of 1-10, Greenway gets a 0.

Not well. I have a home warranty and every time they get sent, they find a way not to cover - but offer me a deal of $380 for example this time, in order to do the discovery to find out the problem. If you don't even know what the problem is, how can you know it won't be covered? I had the same issue when they were called to service my AC. NEvER AGAIN

The plumber who was sent out could not unclog the drain. The soonest Greenway could send someone out to fix the problem was 11 days later. This was a clogged drain that require no parts to be ordered. I chose to call Roto Rooter who came out 90 minutes later and fixed my problem. I found it impossible to deal with Greenway, from waiting on hold for extremely long periods of time, to being able to speak with a manager or supervisor about the unreasonably untimely service. I didn't receive a call back after leaving a message for the complaint manager.......seems the plumber's camera equipment was broken, the phones and computers were causing major problems. Lots of excuses.....no service.

Description of Work
My kitchen drain was clogged.

I have a home warranty insurance and they designate Greenway. They provide plumbing, electrical, air conditioning, all kinds of services. There was no cost except by the home warranty company. It was fine. They fixed the leak in the bathtub. It went fine.

Description of Work
They fixed a leak in bathtub.