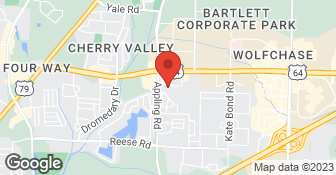 We had a wonderful installation tech named, Todd, who was prompt, courteous and efficient. We would use them again for any window needs we may have that come up. We did have an extended wait for the windows to come in; however, that was out of the company’s control due to Covid.

Description of Work
We had two window panes replaced in our home.

I hired the Glass doctor to fix my double pane Window last month prior to selling. The window failed inspection and the Glass doctor was called back out. The representative came out and advised that the window was measured wrong and was too small. Since then , they have tried to patch it without replacing the window. Today, 9-17,2019, the presentative came out today to re-fix the window due to it failing inspection. He didn't have the right materials and couldn't fix the window. He took the window out and Left to go get a part and never came back. I called back several times and only got the round around. It's now 245 and my house is still open because there is no window installed. It is inside the room on the floor. I was told he had a emergency, as if my job was not. The lady that answered the phone was very uncaring and unconcerned. She told me she didn't know what to tell me. I couldn't talk to the manager nor the owner. Very very poor business practices. If this is the way they treat customers, I feel sorry for the community they serve. Still no call back from anybody and this window cost in excess of $400.00. Would have given zero stars, but that is not one of the choices. The owner should know how his business is being run while he is supposedly out of town, per the person who answered the phone. I would not hire them to watch my dog, letting my home repairs. Surely disappointed.

Professional service from start to finish at a competitive price.

Swapped it out with no issues. Quick and easy.

They provided a prompt quote, showed up as scheduled, helped install & clean the glass, and were professional.

Description of Work
We needed a number of glass table top pieces and found them thru Angie's List.

The man that I spoke with first time, hung up on me, I called back I said that we lost connection, he said no I proceeded to tell him what I needed, he said that NO We don't do Lg Trucks, and hung up. Again

Description of Work
The location in Memphis is very rude and disrespectful. I will never be calling them again.

Great! Nice job and so much less than the competition!

Description of Work
Replace a car door window that had been broken.

The guy that was sent out was excellent!

Description of Work
Replaced the bay window in my kitchen.

Thank you for your review. We appreciate your business and your positive words about our employees.
5.0

Estimate was done within minutes, arranged to drop off my car the next day. Received a call around 11am that my car was ready. Paid the price as estimated. Service was friendly and prompt.

Description of Work
Replaced the windshield on a 2003 Blazer

[Removed member name], Thank you for your review. We appreciate your business and your positive words about our employees.
4.0

Replacing a windshield with the manufacturer's brand is too expensive, so I hunted for a non-dealer company. The Glass Doctor folks were nice, and the man I spoke with on the phone seemed knowledgeable. On the basis of my description of the crack, he explained how it was now too large to be repaired, and the windshield would need to be replaced. He asked if my car had an electric ice melter (or something), which I obviously did not know at the time. After getting prices from different vendors, I went with Glass Doctor. (Prices were about 1/4 what I would've paid at the dealer for a dealer-brand windshield.) When I called to arrange to have the windshield replaced, I was told they no longer do mobile replacement windshields, although everything I'd read said that they did. However, they weren't far from me, so I decided to take the car in and made an appointment for a few days later. I mentioned that I was still unsure whether the windshield had a melter and was told they would get both types delivered from a local supplier and install the one that matched. (I later learned from my manual that it did indeed have a melter.) On the day of the appointment, I had planned to wait for my car, as the replacement was only supposed to take 60-90 min. Fortunately, a friend drove me anyway, because when I arrived, the Glass Doctor said they did not have the windshield yet. I asked when they would get it, and they said, "Probably within an hour or so." To my mind, that also meant added time to actually replace it. I didn't see anywhere to sit in the small lobby, so left with my friend. I called several hours later to see if the work had been completed and was told they were just about to call me. There was some mixup with the bill when I arrived to pay and pick my car, and the Angie's List coupon did not apply because "the windshield was already discounted." In all fairness, the coupon did say "residential," which my car was not. Still, they gave me a good price after the new-person mixup was resolved. Later, when looking at the windshield, it did not seem that this new version had a heater, but I'm only guessing because it did not look the same along the bottom--all black vs metallic like the original. Additionally, a few hours after picking up the car, the satellite phone signal chip, which is stuck to the center interior of the windshield, popped open, and I could see a piece of foam tape inside that was being used to hold it shut--it wouldn't click back together. Did the technican break the chip housing? Was the phone tape in there originally? I don't know. I just know that it was holding together fine when I took it in. I was going to call the Glass Doctor to see if they would fix it, because my Bluetooth now only worked intermittently, but instead, and unexpectedly, we ended up selling the car--not because of the broken sat chip!

Description of Work
Replaced a windshield.

Southern Blue Construction began in 2018 as two friends who believed that they could grow a company with hard work and integrity that would make the city they love a more desirable place. Over the years, the company has undertaken many challenging projects and accumulated skills, know-how and experiences in design and build solutions, project management and building trades. Today, SBC takes on the General Contracting role for small, medium and large residential projects. Our objective is to provide our clients with an "I am assured" experience when we are chosen to execute their projects. Our emphasis on clear communication and follow-through procedures ensures that our client's objectives are top priority in planning and executing all our projects. We hope to hear from You soon!!  …

Cransten is your personal home services concierge to take care of all the jobs around the home that you need completed.We guarantee your satisfaction and we won’t leave until the job is done right. We pride ourselves on the quality work we provide, while delivering great customer service! Check out our services offered and call or click to schedule a free estimate today!  …

We are a complete home repair and remodeling company as well as a handyman service. We install windows and doors, paint interior and exterior, remodel full bathrooms, repair rotten wood and termite damage repair, install ceramic tile and laminate flooring. We are insured, licensed, offer great discounts and give free estimates within 100 miles. We are a family based company so our customers are our priority!  …

How is Glass Doctor of Memphis overall rated?

Glass Doctor of Memphis is currently rated 4.2 overall out of 5.

What days are Glass Doctor of Memphis open?

Glass Doctor of Memphis is open:

What payment options does Glass Doctor of Memphis provide

Does Glass Doctor of Memphis offer a senior discount?

Are warranties offered by Glass Doctor of Memphis?

What services does Glass Doctor of Memphis offer?