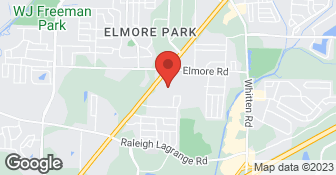 Crowe Heating & Air is a family owned business based in Memphis Tn. We have been in business for about 10 yrs....

Would highly recommend Crowe Heating and Air. They were recommended to us by our neighbors. Their price was substantially less than another prominent HVAC company and they offered better financing option. Richard Crowe is very friendly, professional and did not use any high pressure tactics. The crew showed up right on time and completed all work as discussed and outlined. They even did some unanticipated extra work. They asked about creating another crawl space opening to get to an area under the house where duct work needed to be attached. This was done at no extra charge and one of their crew, Michael, came out early next morning, to attach, latch, and paint the covering. They also went the extra mile on another issue which was not of their doing at no charge. An overall great experience.

Description of Work
Replacement of central air and heating units

I have been using Crowe Heating and Air for ten years. After just using them at my house, I wanted to write how blessed I am to have them working for me for so long. Crowe Heating and Air is the most loyal company I have come across and they are ALWAYS on time. Richard Crowe is so professional and very informative. I was appalled to get on this website and see a review that was rated so low. They obviously have not used them much at all. I recommend Crowe Heating and Air to anyone!!!! They are GREAT!!!!

Richard Crowe came on time. He took the burners outside, then brought them back in. He vacuumed the furnace box area. Now for the scary part. After I mentioned that I hoped there was nothing seriously wrong, because I had to have an air conditioner installed earlier in the year, Richard said there was something he wanted to show me. We went to the furnace. The cover was off. He said there was dangerous and quot;blowoutand quot; from the burners way past what was safe. He turned the thermostat and made the burners come on. Then he turned it off and immediately back on. The flames flared out. I was a little concerned, but probably not alarmed enough. So he repeated the off/on sequence 4 or 5 times in quick succession and the flames were really flaming out sideways. The flames were not all blue, but blue and orange. He said this was inefficient and dangerous. He took my invoice and under the $80 charged for cleaning/inspection he wrote $1850.00. I told him I didn't want an estimate for a new system written in the charges column. He said it was all right. I made him cross it off. He had already torn my copy away from his copy, so I made him put the two copies back together. Also, he had failed to subtotal and total the charge. And I made him write paid on my copy and initial it because he had again separated his copy from my copy. Suspicious that Crowe was trying to scam me, I called in another heatin and air company for a second opinion. That man said you never switch the heat on and off within seconds because there is residual gas in the burners and it will flame out. That's all I needed to know. I hope no one else falls for that trick. The second heating and air man said there was nothing wrong with my furnace.

I apologize for the bad experience. I believe there may have been a miscommunication. I spoke with Richard and he was simply trying to show an early sign of trouble and give you an idea of cost to replace the equipment. Had he thought that the furnace needed to be replaced now, he would not have left the unit running. We strive to be an honest company and would not intentionally mislead anyone. Thanks, Jay Crowe
5.0

Showed up early, and finished two hours ahead of time. If you weren't there, you would have never have know they were in and out. Showed respect for my home and cleaned up after themselves.

Description of Work
Bought a new house, Crowe came out and performed the repairs needed from the inspectors report. They cleared showed me that the furnaces were on their last legs. While they could get them working, they explained to me why they would not be efficient. Quoted me a price for new furnaces we had them installed a few weeks later.

Crew was very prompt, courteous, and very careful to clean up after the installation. I would highly recommend Al Britt's company for any air conditioning problems.

Description of Work
Mr. Al Britt was very prompt in responding to my request to check my air conditioner (within a few hours from my call). He was very thorough in explaining exactly what was wrong and the different options that were available. I priced and got several estimates on exactly the same AC unit (Trane 17 Seer). By far he had the best price.

Our heat went out on Christmas Eve. We called several companies and gots lots of false promises or appointments for after Christmas. Crowe gave us a time of 4pm, then to our surprise called back and asked if they could come earlier. We were thrilled. They are professional, efficient, and priced fairly. We called them back in March and replaced a control panel. The second time, we had the same great service!

Crowe Heating and Air was punctual and efficient for the fall cleaning and inspection of the heating system. I first used this company in the summer when I had an AC failure on an old compressor. Expecting to replace the compressor, I was pleasantly surprized to find that a common capacitor failure was the problem and the total repair was $125, including parts, labor and cleaning of the outside unit. The system has functioned better since the repair.

Crowe Heating and Air was very responsive and quick to come out to do an assessment of our system. We purchased all of the needed equipment, the air conditioner included as well as the heating system. They were very honest and polite. They even came back out to check the system.

Description of Work
They removed the old air conditioning and heating unit and hauled it away so they could replace it with a brand new system.

One of the most popular heating and cooling companies in Northern MS, RW Heating & Air has dedicated our business to high standards. OFFERING NEXT DAY A/C INSTALLS - we have the product on-hand and ready to install. We do everything we can to provide the best quality in all of our services whether we are doing installation, maintenance or repairs. Our friendly customer service staff will make every effort to get your problem taken care of fast, even on nights and weekends. Our skilled, licensed HVAC, Plumbing, and Electrical Technicians will provide you with efficient, professional service. Our team takes pride in offering the area’s best customer experience. We pride ourselves on value, by providing quick and cost-effective solutions from friendly technicians. You can rest assured that we won’t try to up-sell you on improvements you don’t need. If it doesn’t make sense for our customer, it doesn’t make sense to us. Doing business the way we’d like to be treated means being upfront, honest, and considerate of your home.  …

Bonded
Insured
All statements concerning insurance, licenses, and bonds are informational only, and are self-reported. Since insurance, licenses and bonds can expire and can be cancelled, homeowners should always check such information for themselves.To find more licensing information for your state, visit our Find Licensing Requirements page.
General Information
Free Estimates
Yes
Eco-Friendly Accreditations
No
Payment Options
Check, Visa, MasterCard, American Express, Discover
Senior Discount
No
Warranties
Ask for details

CROWE HEATING & AIR is currently rated 4.6 overall out of 5.

No, CROWE HEATING & AIR does not offer eco-friendly accreditations.

No, CROWE HEATING & AIR does not offer a senior discount.

No, CROWE HEATING & AIR does not offer warranties.