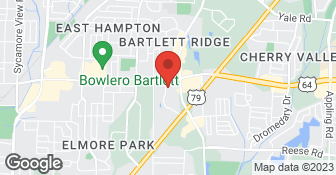 Give us a call, or click for an estimate, today!  …

Description of Work
We purchased a home owned by CACO Construction. Although they were very friendly and honest by appearance, we found that they were more interested in cutting corners and saving their bottom line.

I needed a portion of fence replaced with a gate, 300 ft of fence raised, a concrete slab poured, rotten wood support posts replaced and a long gravel driveway resurfaced. The owner came out took measurements and said he would email or call with estimate. A week later I called because I had received no estimate. He said he would get that to me soon. Called a few days later. He said had been busy, but had just gotten the prices for materials and would email later that day. No email. I have since hired another company to do the work. The owner was very very nice and helpful with tips about other projects I wanted to do, but I got no response. Maybe there is a reason why he did not contact me, but I would have appreciated a call to let me know that he could not do the work. I would not have even commented on him because he was so nice, but I got an email from Angies List stating that users had requested feedback on this contractor. .

Their estimate was lower than other estimates and they kept to that price when finished. The work was started on time and finished on time. I was very impressed with the quality of their work. More importantly, the buyer of my house was equally impressed. I would definitely use them again.

Description of Work
They fixed everything that the buyer of my house wanted done before closing, including replacing damaged walls on backyard shed, fixing closet door, repairing gutters and eaves.

Everything was excellent. I liked everything about the service, came on time everyday, cleaned up everyday, and did a great job.

Description of Work
We had the cabinets painted, granite counter tops put in, new sink, and new light fixtures also put in.