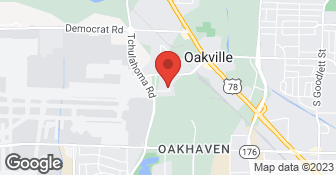 It was an AWFUL experience!!! I contracted with James Garner, owner of Aquatic for a Pool, Spa and Pool House. He said he could do it all. We went to see 5 pools and I called 5 references. All pools looked good and the references were good. The contract was signed on April 11, 2011 with a completion date of Memorial Day weekend. The work was not nearly completed on Memorial Day, the reason given because there had been 14 days of rain, which was true. I asked for and got a detail listing of a new completion date of June 11. The work was not completed then either. I told Garner that I had to have the pool available on July 3. He got the pool poured, with one of three lights that were to be in the pool working. However, he rigged it such that the light was on 24/7. He said that was okay. We were able to swim on July 3. The concrete was poured, but stained the morning of July 3 by one of his employees that he left with no supervision. The staining is Awful. I wish I could attach pictures. Garner said it was due to the shade and that was the way it was supposed to look. In the meantime, the pool house had been constructed, but was not complete. There were no shingles on the roof and he never put any on the room. On July 8, he emailed me for a draw and that the check be made out to him personally. I told him no money and no draw. His crew worked on Monday, July 11 and I haven't seen anyone since. I called numerous times and he called me on Thursday, July 13 and said he would be back. I have retained an attorney and have had to get another contractor and Pool company to finished the work which is going to cost $40 more than the remaining money that I owe him ($10k to fix/the poor staining job alone). Through investigation and working with customer who he performed similar low quality work for, he pulled his permit for $24,600 whereas the actual contract was for 6 times that amount. He is not licensed to do pools and his insurance had lapsed (something the insurance company says happens yearly). He used new employees and left them unsupervised. He could not be contacted and generally did not return calls. His people were unprofessional, trashing the grounds, working on their vehicles, and drinking beer on the premises. If you see the name Aquatic or James Monroe Garner, run the other way. Do not waste your time. If you are currently contracting with him, watch him closely for the same symptoms and do not pay him for anything that he has not done. He obviously has a cash flow problem and is robbing Peter to pay Paul and in the end, I doubt that anyone gets paid. When I terminated his services, he owed the pool house construction guy, the brick mason, and the plumber.

Description of Work
On April 11, 2011, I contracted with Aquatic to build a pool, spa and pool house to be completed or nearly completed by Memorial Day weekend. The work was never completed and on July 13, my attorney sent James Monroe Garner, owner a letter directed that the work be completed by July 21, 2011. I have not heard from Garner since July 13.

This was an absolute nightmare from almost start to finish. We are currently entering a legal battle with this company for work still not completed so I guess it really isn't over. To begin with out start date was October 30th of 2006. The contract we signed was that the work would take approximately 30 working days; weather pendent. The hole was dug and granite was applied by about mid-December and then we didn't see them again until we started calling in March. We had perfect weather in March but they always had an excuse as to why they weren't coming, and so we sat with large unsecured hole in our back yard until we threatened legal action in May. The pool was finally completed with final walk-through on June 16th of 2007. This company came highly recommended and for us they were an absolute nightmare; we ended up doing the pool design as their ideas were plain, no help was given with chosing tile, plaster color, waterfall styles.

Description of Work
Installed an in ground, granite, heated, salt-water pool on our property.

Company specializing in landscape, maintenance and Irrigation. We guarantee your satisfaction and we won’t leave until the job is done right. We pride ourselves on the quality work we provide, while delivering great customer service! Check out our services offered and call or click to schedule a free estimate today.  …

Call Us Today @ (901) 282-7918!!! Landscaping Business Solo Landscape is a locally owned and operated Memphis-area small business dedicated to quality landscape and supreme customer service at reasonable prices. Browse through our portfolio and services to discover how Solo Landscape can beautify your home or business.  …

Harris Landscape & Design is a premier full service landscape company. HLD specializes in custom masonry and concrete services. We also prices detailed 3D designs complete with 360 degree views and video pictures. HLD wants to take your project from start to finish and give you the landscape of your dreams.  …

Bonded
Insured
All statements concerning insurance, licenses, and bonds are informational only, and are self-reported. Since insurance, licenses and bonds can expire and can be cancelled, homeowners should always check such information for themselves.To find more licensing information for your state, visit our Find Licensing Requirements page.
General Information
Free Estimates
Yes
Eco-Friendly Accreditations
No
Payment Options
Check
Senior Discount
NO
Emergency Service
Yes
Warranties
Yes

AQUATIC DESIGN & CONSTRUCTION INC is currently rated 1 overall out of 5.

No, AQUATIC DESIGN & CONSTRUCTION INC does not offer eco-friendly accreditations.

No, AQUATIC DESIGN & CONSTRUCTION INC does not offer a senior discount.