A Head Above Home Repair 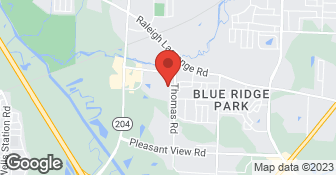 Jody Tate responded to my call quickly and came out to give us a quote on stripping the wallpaper, repairing and painting the walls, and painting the woodwork and doors in a bathroom. The job was very time-sensitive. His crew was here on time and did an exceptional job in all areas. Jody has done work for us before--primarily handyman jobs--and we will definitely call on him again when the need arises. We highly recommend A Head Above Home Repair!

Everything went great!! They were on time and the carport turned out wonderful. I will call them back if I need any work done in the future.

Description of Work
I wanted to improve the look of my house by adding a carport to it! I saw the work that A Head Above has done before and gave them a call. It turned out perfect, now I can park and not get soaking wet when it rains.

Jody and his team were great!!! We had a complete home renovation done and it only took 4 weeks!!!! I didn’t have to worry about anything!!! They keep me informed on everything!! I would definitely hire again!

Thank you so much for the positive review. We enjoyed working with you and look forward to doing so again in the future. Sincerely, A Head Above Home Repair
1.0

Description of Work
The owner arrived on the day scheduled for an estimate a little late. He seemed genuinely nice. I asked for several things to be done including sheetrock, columns and a window seat with shelves. Only after he left did I realize that he never took down one note nor did he measure any portion of the window seating wall that it would be attached to. I asked him when I might expect a price and a outline of the project and he said "two days". One week went by with no phone call, so I called and he said he had forgot and would get back to me. A week later and no follow- up. My guess was he had no intention of bidding on this job and could not be honorable enough to tell me so. Just a huge waste of my time.

After they stated Mr. Tate was rarely there to supervise, he had his son and 2 ******** (who could not speak English). It was a mess, they broke my granite countertop because they did not have enough people to carry it, and it was not replaced-he said he could fix it and I would not know the difference. the cabinets did not fit, I have to leave one drawer open because they did not make room for the outlet for my disposal. They were to put in a new disposal, they put in the old one. They did not put the proper insulation in, I asked several companies what type of insulation they should use, and all agreed he put in a cheap leftover instead of one that was proper behind sinks. They were always late and unprepared. He talked non-stop to keep me from noticing what they were not doing. It was a mess from the backsplash down-I had to hire another contractor to clean up the mess. Never use this man he is a con artist!

We offered to replace the top and she would not let us back in to finish the job.
5.0

Very professional, on time. Did a great job. And always cleaned up the mess at the end of the day. I will use this company again.

Recommended as economical but good quality by acquaintance. Was quick to but, but difficult to contact for discussions/specifics of work to be done; usually took several attempts over course of days to get responses. I'm sure he had other jobs, but lack of response made it difficult to arrange, and pushed date for work out beyond original time frame. Agreed on prices for additional work such as ridgeline and 1-year warranty. Got in writing on quote document for installation of ice/water barrier in valleys. Also had exact brand and color of shingles agreed in writing. Upped his price by noting that more shingles would be required than original estimate. On day of work, had different color of shingles delivered WITHOUT even mentioning to me first! Also had fewer shingles delivered than was ultimately priced (had more like original amount, after raising price for later estimate). Had to have some additional shingles delivered but still not as much as agreed in final bid (he claimed there were more delivered later, but the work crew said there were no more delivered). Receipt from roofing supply store showed original lower number; claimed to have receipt for more but never provided receipt. Did not purchase enough ice/water barrier in the valleys, and at least one valley was installed without it before we caught them - one of the things we'd discussed and added to the bid. Another additional charge had been for use of more and longer nails we'd requested to be installed, but it appeared the amount delivered per roofing supply receipt was not as much as he said he needed/charged. (The crew itself, via a subcontractor, seemed to work pretty hard, appeared honest, and did a good enough quality job of installation otherwise, as far as we can tell.) After several more contacts, made one final trip to repair water rot in wood - but did not repair spot we'd originally requested. Upon my attempts to have him return for that, he returned some messages but never came back to fix it, claiming we had pointed out a different board. Stopped responding, basically leaving legal action as only other recourse, knowing that it would cost more for me to pursue than the cost of having someone else do that work. Price is good, but this is a case of getting less than you pay for. With all the trouble, the bait-and-switch, the increasing of charges but refusal to provide receipts justifying increased charges, not ensuring work crew knew all items we'd discussed/had in writing, lack of responsiveness, and snide argumentative attitude when requested to finish all work he'd agreed to, I would certainly NEVER recommend anyone have work done by this company. I don't generally write negative reviews, but this is among the very worst service provider experiences I've ever had.

Description of Work
Replace roofing (over existing shingles) and ridge vents. Was to install ice/water barrier in all valleys. Was to replace decking with water rot.

Painter1 of Memphis has been in the residential painting and commercial painting business for over 20 years. Painter1 of Memphis is fully licensed, bonded and insured and all of our professional painters are skilled and vetted painters who are trained on our process. We do interior and exterior painting for both residential and commercial projects. Painter1 of Memphis is here to help! When it comes to professional painting services, we like to think we've pretty much done and seen it all - from water parks to barns, amusement parks to office buildings and homes to restaurants. If you're unsure of whether or not we can help out with your unique painting project in Memphis, just call and ask! It's FREE! We guarantee your satisfaction and we won’t leave until the job is done right. We pride ourselves on the quality work we provide, while delivering great customer service! Check out our services offered and call or click to schedule a free estimate today.  …

Frequently Asked Questions & Answers about A Head Above Home Repair

How is A Head Above Home Repair overall rated?

A Head Above Home Repair is currently rated 3.6 overall out of 5.

What days are A Head Above Home Repair open?

A Head Above Home Repair is open:

Does A Head Above Home Repair offer free estimates?

Does A Head Above Home Repair offer eco-friendly accreditations?

No, A Head Above Home Repair does not offer eco-friendly accreditations.

Are warranties offered by A Head Above Home Repair?

No, A Head Above Home Repair does not offer warranties.

What services does A Head Above Home Repair offer?

Are there any services A Head Above Home Repair does not offer?