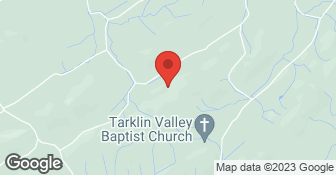 It is hard to believe that the owner of a business, supposedly wanting to provide good service and grow his business would deliver such a very poor quality service and be so aggressively offensive trying to defend it. Very disappointing. I am reminded that "The bitterness of poor quality lingers long after the sweetness of low price is forgotten". And his condescending attitude is really out of place. He deserves what he gets as he stupidly destroys his business.

Description of Work
I initially contacted Rauhuffs for a quote on mowing services after reviewing his reports on Angie's List. Sam came, made a reasonable quote for mowing so I asked him to cut the yard while he was here. When he finished, we arranged for him to return every ten days to mow the yard. I also asked about spreading mulch in the flower beds. He gave me a reasonable quote and said he could do it on the folllowing Monday, if I could get the mulch. On Monday, Sam came with his crew and spread the mulch. Because, I was preoccupied with other projects, I was not able to spend the day outside with them, monitoring what the were doing. So, they were left unsupervised to spread the mulch. It turns out this was a bad mistake. Although, one would think spreading mulch is pretty simple and experienced workers, working under the supervision of their company owner, shouldn't require too much instruction, Sam and his crew somehow did the worst job possible. Throughout the yard, they left large mounds, of shovel thrown mulch a foot deep or more, burying flowers and covering shrubs, even bare areas were not smoothed so as to present a finished appearance. It was rather late in the day when Sam completed removing the large pile of mulch from the driveway. My wife and I needed to be at an engagement, so without walking the property, I briefly glanced at the yard from a distance and seeing he had put mulch in all the requested areas, I paid Sam and we all went on our way. The next day as I was able to get outside and walk the yard. I was troubled by the way the mulch had been spread and the condition of the shrubs, flowers and beds overall. Although I'm not in particularly good health, I began raking, spreading and smoothing the beds in order to recondition them as they should be. Again, on the next day, I undertook reconditioning more of the beds. Then, Sam called unexpectedly, asking if he could mow today, a day ahead of schedule because they were predicting rain for tomorrow, I agreed, asked if they would also help fix the mulch problems in the beds, Sam, said yes, and he and his crew came later in the day, I showed them what I had done and how I had expected the work would have been completed. Sam said they would make it right and went to work on the beds. After they finished mowing, obviously frustrated, Sam and his crew spent 20 - 30 minutes hurriedly raking some ot the unfinished flower beds in the front yard, they returned their tools to the trailer, and asked if that was okay? Reluctantly,I said it looked okay. It was hard to believe, they considered their work done. We hadn't even looked in the back yard, but since Sam had said he would make sure I was perfectly satisfied, I thought we could address the back yard later. After several days of rain and some other things needing attention, I thought I should see what I could do to rework the flower beds in the backyard. Emphyzema has a way of making this work very difficult but in spite of it, I managed to accomplish quite a lot. I was pretty well exhausted, the rain had caused the grass to grow excessively so I called Sam to see if he could come a couple of days early to mow. When, I finally got in touch with Sam, he seemed irritated with my call and annoyed I was asking for additional help with the mulch because he thought that issue had been resolved. I reminded him we had never looked at the backyard and he said once again he would make sure I was satisfied. It was approaching 6:00 pm on the evening Sam was scheduled to come mow and take care of the mulch; it had started to rain again. I called Sam, told him it was raining and asked if he thought tomorrow might be better. He said that would be okay. The next day because I had other things to do, at about 1:00 pm I called Sam to get an idea what time he might be coming. Sam answered the phone very angrily, yelling at me in the phone. Asking "Why are you calling me." I tried to explain I had errands to run and didn't want to be away when he arrived, but he continued with his rage, yelling, " he was busy", that "he had a list of yards to mow and that he would get to me when my name came up on the list". I was appalled. I couldn't believe what he was saying and how he was yelling. Why wa he acting like that? Wanting to avoid further confrontation, I told him I would mow my own yard. He said "Do whatever your want". And, I hung up..

When I called him to give an estimate for the mowing and he not just gave me the estimate but also mowed it. He has so far been pretty much on schedule. He comes, mows the lawn, and leaves. He does not bother if I am there or not. He is quick. It is very easy to work with him. He is really good and the price he charges is phenomenal. I have almost an acre of lawn and he comes with three or four lawn mowers and finished the work in 40 minutes. I am very happy with the quality of job he does. He is pretty professional. He mails me the bill.

Description of Work
I use Sams Mowing Service to mow my lawn. They come once in every ten days.

Sam came a long way to do my lawn, so he charged us extra. These folks must hold a speed record. I hear the mowers start up, and it seems like 5 minutes later they are gone and the lawn is cut short. He has other things he does in the winter and doesn't have any leaf removal equipment, so I use another lawn service to finish up the leaves in early December.

Sam came the next day with a crew of 3 others. I was so pleased with their work, I hired them to mow and maintain our yard for the rest of the summer.

Description of Work
I called them to mow my overgrown yard that is very large and hilly.

The first visit was on the same day I called and they have alwasy been here when they say they will and continue to do exceptional work for me,

Description of Work
He comes by every 10 days ($40 per trip) and sends a bill monthly. I have a pretty average sized lot (.5 Acr) and his team comes in and blows through my yard (4 or so at once) in a matter of minutes, Services specific to my yard are simple mow and edge trimming.

Our riding mower broke and we needed the lawn mowed and the trim cut. Sam came out the same afternoon, gave us and estimate and we had him and his crew do the work.

Description of Work
Lawn mowed front and back and trim cut.

Reliable, very affordable, especially compared to the other companies/ people I contacted. Once or twice mowing was uneven, spots missed, but for a working individual or family, minor inconvenience compared to having to mow it yourself. Would recommend to neighbor or friend.

Description of Work
Lawn mowing, including weed eating along driveway, tree(s), and flower bed. Includes both front and back yard.

I called him this morning - he came out to give me an estimate within an hour - and went ahead and did the work while he was there!

Description of Work
I had not yet found time to mow my yard and it had grown to outrageous proportions. I called Sam and they came out the same day and mowed it right away. It was expensive this first go around as the yard was truly out of control with high grass. He will be coming every 10 days to do it for $30. I also hope to get his help with some desperately needed weeding and mulching. He was extremely nice and courteous and responded immediately!!

well. sam is very careful and he monitors the work.

They cleaned up when they were finished and everything looked great when they were done. They were always polite and courteous whenever they were here. It was nice to have someone that was dependable and you could count on. I was satisfied with the work this company provided.

Description of Work
They mowed my lawn, trimmed the bushes around the yard, and did general maintenance.

Sams Mowing Service is currently rated 4.4 overall out of 5.

No, Sams Mowing Service does not offer eco-friendly accreditations.

No, Sams Mowing Service does not offer a senior discount.

No, Sams Mowing Service does not offer warranties.