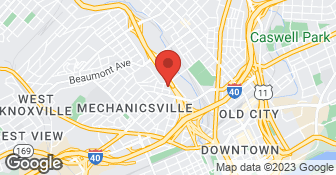 or over 42 years, Ram Jack has been offering high-quality foundation repair and stabilization solutions to families and businesses across America. Our family-owned company is committed to ensuring quality service. With a reputation for client satisfaction and long-lasting, durable products, you can rely on our Knoxville foundation repair and construction specialists to ensure that your home or business rests on a solid foundation for years to come....

I was very impressed with the work performed and the value it has added to my home not to mention the peace of mind. They started on a Tuesday at 9 am worked 9 hours, came back Wednesday at 9 and was completed by 11 am. Two of the holes had to be dug down 6.5 feet to get under the chimney foundation to support it. The rest of the holes dug for the Piles were only about two feet deep. Not once did any of the four men crew complain about the digging or any of the other very manual labor these guys had to do for a day and a half. They took the time to explain everything in detail as they were doing the work and once they were finished you wouldn't even know they were here. They laid down plastic and piled all the dirt they dug out onto the plastic so once they were done I didn't have left over dirt laying throughout the grass. On one side of the house they were able to close up an inch gap in the brick and block due to years of settling to a hairline of a crack. If I had not replaced some doors and windows throughout the house a few years earlier they would have been able to jack the back side up to almost level. As it is now they just went about 1/16th to an 1/8 on the rest of the piles just to make sure the bracket that supports the house is firmly against the footer. If you have settling issues then this would be the company for you. They have a lifetime warranty that can be transferred to another homeowner (for a small fee) so you cant go wrong. The representative that quoted me the price said you can basically figure $1,100.00 a hole and I don't think the depth matters. The price allowed for 28 feet per hole of Pile to support the house, meaning if they didnt hit solid ground after 28' of pipe then there would be an additional charge of 18 dollars per foot. However is one hole only needs 20 feet and the next needed 32 feet then you could move the balance around to other holes. Look them up on YOUTUBE and see how they do it, you will be amazed.

Description of Work
Installed a total of ten Piles on the back side of the house to help alleviate some settling issues and cracks.

Their estimate was a little bit higher, however, they did come up with a better solution. Two guys showed up and took the measurements, explained everything and explained the product. They did a fantastic job and they will be who I go with. They also advised they would be giving me a lifetime warranty on their work.

Description of Work
They came out and gave me an estimate for foundation repair.

I like their technology and they were professional and courteous.

Description of Work
They did some foundation repair.

WE'RE BACK OPEN!! WE WERE CLOSED FOR 2 MONTHS DUE TO COVID-19 BUT WE ARE BACK OPEN AGAIN. SAFETY IS OUR MAIN CONCERN! THE MAD HATTER IS A FAMILY OWNED BUSINESS. WE OFFER OVER THE PHONE ESTIMATES FOR AIR DUCT CLEANING JUST COUNT YOUR SUPPLY VENTS AND RETURN VENTS. The Mad Hatter offers a full line of Chimney Repair Services. GIVE US A CALL 865-947-0755  …

Seiber Restoration has been serving our friends and neighbors in East Tennessee for two decades as a family owned, veteran operated, fully licensed and insured General Contractor. Specializing in all types of foundation and masonry repair, as well as waterproofing solutions, we have perfected our craft and deliver results that exceed expectations time and again. Our name is on everything we do, so achieving peace of mind for our clients through Quality, Compliance, Customer Satisfaction, and Cleanliness remains at the forefront of each and every project we complete. Seiber Restoration has maintained a complaint free A+ rating with the Better Business Bureau for over 15 years because we offer our clients superior products and quality craftsmanship, combined with an unparalleled experience in communication and professionalism. We are proud to offer discounts to our Seniors and Veterans!  …

Our services include: Foundation Repair: We can repair residential and commercial structures. We are skilled at recognizing the problem and enacting a quick and effective solution. New Construction: No matter what your construction need, you can count on us to supply you with nothing short of a job well done. Retaining Walls: Is your retaining wall cracked? We can stabilize your retaining wall and hold back the clay soil for years to come. Basement Water Control: Basement water issues should be

Ram Jack Eastern Tennessee is currently rated 5 overall out of 5.

No, Ram Jack Eastern Tennessee does not offer eco-friendly accreditations.

No, Ram Jack Eastern Tennessee does not offer a senior discount.

No, Ram Jack Eastern Tennessee does not offer warranties.

Ram Jack Eastern Tennessee offers the following services: Our services include: Foundation Repair: We can repair residential and commercial structures. We are skilled at recognizing the problem and enacting a quick and effective solution. New Construction: No matter what your construction need, you can count on us to supply you with nothing short of a job well done. Retaining Walls: Is your retaining wall cracked? We can stabilize your retaining wall and hold back the clay soil for years to come. Basement Water Control: Basement water issues should be