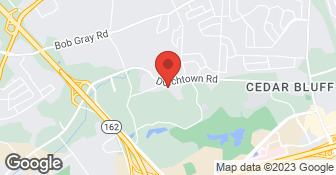 I called Proscapes on Wednesday, 9/30/15, to schedule an appointment for an estimate on a job to build a retaining wall, fill with dirt and plant sod, and scheduled the appointment with a lady named Bonnie. They were very busy, so the earliest she could get an estimator (she said his name was Mike) to take a look at the job was Monday, October 12 at 9 AM. At 9:45 AM on Oct 12 I called Proscapes and spoke with Bonnie again and told her that Mike never showed. She said she tried to reach me Friday to reschedule because "someone went out of town" (?!?!?), but had the wrong number for me. I gave Bonnie both my office and my cell phone number. She also said she emailed me, but I did not receive an email either. I asked her just to cancel. My husband and I both are very busy and since this is a big job, we need someone reliable and dependable.

Description of Work
We made an appointment to get an estimate on a landscaping project, but the estimator was a no show.

Proscapes did a good job on the wall. They did pretty much what they had promised and generally did an adequate job including addressing a drainage problem (ponding in front of the wall) which required additional work and a return trip to our house. The real issue has come with respect to establishment of a new lawn which has been done very poorly. Proscapes did prepare, seed and fertilize the lawn as required under the contract. The problem has been that the lawn has not become established in spitee of regular watering for the past 3 months. When we consulted the company over the lack of a lawn, the business manager was quick to point out in the contract that they did not guarantee the establishment of a lawn- we only paid for them to seed and fertilize the lawn. I looked at the contract and they were indeed correct- the contract said they did not guarantee the planting and establishment of annual plants (ie grass). Of course, they never mentioned this when we consulted with them over our desires to establish a new lawn. Additional contact with the company has not resulted in any resolution. I asked our original landscape consultant with Proscapes to come by and take a look at it. He said that he would but I haven't heard back from him since last contact approximately 3 weeks ago. I am very disappointed with what we ended up with compared to what we hoped for. Our next step I guess is to pay someone else to put in a lawn and read the fine print in the contract. Ironically, our next door neighbor put his own lawn in 3 weeks ago and has a beautiful green lawn that looks exactly like what we thought we were getting for our $10,000 investment.

Description of Work
Built a retaining wall with drainage, filled behind the wall and redid our lawn.

I'm sorry to hear that [Member Name Removed] is disappointed with our service. I do need to point out a few things about his contract. First, his total job was $10,540, but only $295 was for seed/straw/fertilizer. That is less than 3% of the total job cost. A huge majority of this job was hardscapes work and not lawn establishment. Second, [Member Name Removed] received a $395 discount off the total of the job, so essentially the grass seed/straw/fertilizer was free. Third, as it states in our contract we do not warranty seed growth or viability because it is very subjective to outside influences. For instance, a huge rain storm can wash the seed away, it can get too much or too little water, birds love to eat grass seed, etc...His consultant did look at his yard as requested and determined that we fulfilled the duties we had been contracted to do. Even though it is clearly stated in our contract "This warranty does not cover...ground cover (including grass and sod)" we have since added wording directly to the estimate line item that we do not warranty grass seed. Hopefully this will prevent any miscommunication with future customers.
5.0

Mike worked with my husband everyday and was more than happy to take the phone calls if need be. The workers were here for one month straight. They would clean off our driveway everyday before they left, so we could use it. They were not the least expensive company but their service was more than making up for it. They found trees that fit our area. They put in french drains. They did an absolutely beautiful job.

We contacted Proscapes based on the reviews in Angie's List and based on two recommendations from others who have had worked performed by them. We were advised the person who could give us an estimate on our landscaping was out of town for the week and they would give him the message to call the following week. We never received a call back from Proscapes.

Description of Work
Failed to return our call for an estimate on landscaping.

I am very sorry to hear that you did not receive a return call. Our procedure is for the office manager to set up an appointment for an estimate immediately upon receiving a phone call, not to pass along a phone number for a return call. We don't have record of this customer in our system, so I can't verify that we dropped the ball. Regardless, I do apologize for this oversight.
5.0

Proscapes transformed the appearance of our home by completely redoing our front lawn and the back yard areas. The Proscapes designers gave us a lush, verdant lawn that is truly impressive yet still understated at our request. Essentially, they gave us a and quot;WOWand quot; factor that one gets when first viewing our home. Also, our backyard area has now been transformed into a beautiful pergola with a stone walkway from the parking area to the pergola. The small sides along the walkway are now a river-rock rock garden. We also have a maintenance contract, so we trust Proscapes to completely care for our yard. We do not give trust easily, so you can see we are very happy with Procapes and all the work they have done for us. We would especially like to thank the owners, Mike and Katie, for going above and beyond in meeting our expectations. Without reservation, we can highly recommend Proscapes for creating beautiful, professional landscapes.

Description of Work
Killed all the existing vegetation in the front yard, removed that while contouring the yard topography, installed an irrigation system, laid sod, and created flower beds framing our driveway and sidewalk.. Also, planted three 15 feet tall trees to screen off the view of the interior of our neighbor's garage. In the back yard, rebuilt the deck and pergola, built a stone walkway from the parking area to the pergola including lighting along the walkway, removed the weedy vegetation, covered that area with river rock, removed nine trees from around the house, reworked the slope of the ridge area above the back of the house by removing the weedy vegetation and planting a pattern of shrubs with the remaining areas covered in beds of pine straw.

They were willing to work with me throughout the installation. I changed the design at the beginning of the work and then didn't like it. They worked with me to make it a much better finished product even though some pavers had to be taken up and reinstalled. Great customer service.

Description of Work
They did excellent work on a paver sidewalk and stump removal. I would definitely use them again even though their price is higher than others that had less experience.

The first time I spent about $60,000 and that was 3 years ago. Our builder used them so I didn't really pick them but they did a good job. It took 4 or 5 months for this project. They did a fine job.

Description of Work
I used Proscapes to landscape a whole new house including the yard and grass. They did lighting, landscape, pavers, driveway and lawn irrigation. They also mow my yard and take care of it. They do lawn fertilization and treatment.

We were going to have them do more work for us but after they stood us up two weeks in a row we decided not to go through with them. They are expensive.

Description of Work
Proscapes Landscape Design did some outdoor lighting for us.

I am very sorry that this customer was stood up several times. As the owner, I was unaware of this happening. I just want to clarify that the employee that missed the appointments is no longer with our company. I am sorry that you had a bad experience and we realize that we can only be as good as the employees working for us.
5.0

The Proscapes team was very responsive throughout the whole process. From the initial estimate to the finished product, the team started and ended on schedule.They stand behind their work and made sure I was satisfied with the results.

Description of Work
My backyard wasn't really usable due to the slopes and grade. Proscapes came out and did the following work: Re-graded the backyard including building two retaining walls. This created a larger, more level area that allowed us to start enjoying our backyard. Installed an irrigation system that covered the front, back, and flower beds. Killed the grass in the front yard and replaced with sod.

We specialize in excavating, leveling, dump truck hauling , gen. Yard leveling , drainage. ( for driveway). Etc. footers and more! Stone, gravel or sod delivered and leveled. We guarantee your satisfaction and we won’t leave until the job is done right. We pride ourselves on the quality work we provide, ( striving to please, the lord).! while delivering great customer service! Check out all the services we offer below and call -- or-- click to schedule a free estimate today!  …

With over 20 years of professional Electrical and Construction Service experience, DCI is available for any Residential Repair and Installation. We pride ourselves on customer satisfaction and top-quality workmanship. Electrical services include troubleshooting and diagnosing issues and providing a full explanation of available options. Construction Services include Renovation projects, Additions, Repairs, and more! Give us a call today to discuss your home service needs.  …

Specializing in ELECTRICAL SERVICES! We always guarantee your satisfaction and won’t leave until the job is done right. We take pride in ourselves and on the quality work we provide, while always delivering great customer service! Check out our services offered, then call --or-- click to schedule a free estimate today!  …

In business in Knoxville, TN since 2000, Proscapes - Landscape Design Group, Inc. is a full-service landscape design, installation, & maintenance firm. We can provide all phases of your landscaping project IN HOUSE. Starting with a site plan or design layout, we can creatively and professionally take your landscape project from start to finish. Over the years, Proscapes - Landscape Design Group, Inc. has worked hard to build a reputation of landscape excellence and superior customer service.

PROSCAPES LANDSCAPE DESIGN GRP is currently rated 4.3 overall out of 5.

No, PROSCAPES LANDSCAPE DESIGN GRP does not offer eco-friendly accreditations.

No, PROSCAPES LANDSCAPE DESIGN GRP does not offer a senior discount.

PROSCAPES LANDSCAPE DESIGN GRP offers the following services: In business in Knoxville, TN since 2000, Proscapes - Landscape Design Group, Inc. is a full-service landscape design, installation, & maintenance firm. We can provide all phases of your landscaping project IN HOUSE. Starting with a site plan or design layout, we can creatively and professionally take your landscape project from start to finish. Over the years, Proscapes - Landscape Design Group, Inc. has worked hard to build a reputation of landscape excellence and superior customer service.

Are there any services PROSCAPES LANDSCAPE DESIGN GRP does not offer?