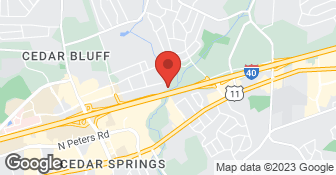 They came out here, 4 times to fix the same problem, each time charging us 300 dollars, assuring the ice maker was fixed. This was in a 3 week period. Finally the 4th time they told us, our ice maker couldn’t be repaired, and we were just out all of our money. Total scam!

Description of Work
Ice maker on the refrigerator repaired

Do not use this company--expensive, poor service, and terrible customer service. The technician failed to diagnose the issue correctly and communicate the possibility of additional repairs that may be needed to fix the problem. I am not sure if he was unknowledgeable or simply avoided communicating this, either option is not good. After paying for the first repair we were then told additional repairs were needed, which meant our total cost would in fact surpass the value of the machine itself. When the manager was confronted with the technician's failure, she first admitted that her technicians should "typically" communicate such potentials upfront, but then doubled down and took an argumentative approach. In the end, she sought to blame me rather than her technician's failure to communicate. She is right, I was wrong for trusting Mr. Appliance to be thorough, honest, and reliable. There are lots of other options for your appliance needs, go another direction.

The tech was condescending and said he fixed the problem. I wrote a bad review on Facebook because of the very displeasing interaction. A week later, the same code returned. I called to have him come out again and they refuse to return due to my negative review. They also lied about conversations that never happened regarding their inability to fix the problem and about communication efforts.

Description of Work
Repair a dishwasher

Almost 3 months later and still not repaired. They have been here 3 times with nearly $600.00 paid to date. He was here yesterday and said I needed another $340.00 part. So they were trying to charge me almost $1000.00 and no guarantee that problem would be solved. I called to talk with a manager but she was out to lunch so I left a message. "Someone" called back a few minutes later and after explaining my shock and disappointment, she said that parts fail. How convenient they failed bam bam bam in the spread of just over 2 months. Not customer friendly. This is a "racket!" Customer beware!!!!!

Over a half dozen service calls and still never fixed the appliance. Poor technicians and even worse customer service. Very dishonest company. find any other repair company instead,

Very expensive, Insisted on payment upfront, No resolution to problem. Go to UTube instead, get same day part delivery and no need to miss work waiting endlessly. If you want repair done correctly, do it yourself.

Charged $270 to replace a lid switch on our washer. The part costs between $8 and $30, and they provided about 20 minutes of labor. No receipt given at time of payment. Nearly $100 fee just to diagnose the problem so you're already out of luck by the time the tech gets in your door. Called and spoke to people in the local office twice and they refused to do anything about this outrageous price. Claimed they spent $85 on the part, which is not credible and is far more than any price I found. Do NOT use these crooks. I filed a BBB complaint against them and may even pursue legal action if they do not refund my money.

We stock all of our vans with the most common parts, and we also warranty our repairs for one full year. We provide an up front quote to all customers so that they can decide whether they want to do the repairs, or pursue another avenue. So this customer was provided an up front quote, prior to doing any repairs. The customer opted to do the repairs, paid the technician the quoted amount, and signed the authorization form. Since the part was readily available on our van, the technician was able to complete the repairs at the time of the initial service call. If the customer wanted to change this, they only needed to tell the technician, prior to him installing any parts. We are a national franchise governed by proven successful policies, and procedures. Operating above the line in all aspects of our business.
1.0

It started out well, however once the tech came out and diagnosed the problem the service declined. The tech arrived promptly, diagnosed my stove and told me it was working fine. As soon as he left I tested it myself and it wasn’t working. He returned and determined that I needed a new circuit board. I was charged $89. For service call and $237.65 for the part. The tech indicated on his invoice that he installed the new part. It was never installed! A week later Mr. appliance called me to cancel my install appt. and said they did not have the part yet. A week passes, and the part still isn’t available. I call to complain and was told the part was on back order with manufacturer and they could not give me a definite update. It has been a month! So here I am $326.65 dollars later, no part, no updates, no stove!

Technician was prompt and courteous but he did no more to diagnose my drain problem than I did. Pushed a few buttons on the washer to replicate the issue and then said my drain motor was burnt out. Never checked the hoses or the actual drain to see if there was a clog. Then he gave me an estimate to repair. When I asked him to separate the quote into parts and labor I found he was charging nearly $80 for a part I could get online for $18. I asked if I could provide the part. He said I could but it would be several weeks before they could come back. So I paid the $90 service call fee and sent him on his way BTW the entire repair charge was $259. A bit excessive since I bought a brand new unit for $549.

Return trip was required because parts were needed. All went fine.

The Tech was able to diagnose the problem and replace the faulty part.

Description of Work
My freezer had stopped freezing.

Description of Work
Mr appliance fixed my microwave. He worked until he solved the problem and also gave advise about how to avoid the problem in the future.

He was polite and did his job. He came in for a diagnosis and he told me that replacing parts will not stay longer because the main computer is down. He was honest to tell me that. He responded well and was very professional. It is easier to schedule. You can schedule online and he was prompt.

Description of Work
I had him to check my washing machine.

I received absolute wonderful service from the technician. I would highly recommend them.

Description of Work
They repaired a microwave door and also a power switch on a separate occasion.

My focus is quality and warranty! I never cut corners. I will take the time to make sure you are 100% happy! I will tell you exactly what I will do and find a solution that's quit and affordable. KNOXVILLE SERVICE FEE 30$ MARYVILLE & LOUISVILLE SERVICE FEE 40$ SEVIERVILLE SERVICE FEE 50$  …

All statements concerning insurance, licenses, and bonds are informational only, and are self-reported. Since insurance, licenses and bonds can expire and can be cancelled, homeowners should always check such information for themselves.To find more licensing information for your state, visit our Find Licensing Requirements page.
General Information
Free Estimates
No
Eco-Friendly Accreditations
No
Payment Options
Check, Visa, MasterCard, Discover
Senior Discount
No
Warranties
Ask for details

How is Mr. Appliance of Knoxville overall rated?

Mr. Appliance of Knoxville is currently rated 2.6 overall out of 5.

What days are Mr. Appliance of Knoxville open?

Mr. Appliance of Knoxville is open:

What payment options does Mr. Appliance of Knoxville provide

No, Mr. Appliance of Knoxville does not offer free project estimates.

No, Mr. Appliance of Knoxville does not offer eco-friendly accreditations.

Does Mr. Appliance of Knoxville offer a senior discount?

No, Mr. Appliance of Knoxville does not offer a senior discount.

Are warranties offered by Mr. Appliance of Knoxville?

No, Mr. Appliance of Knoxville does not offer warranties.

What services does Mr. Appliance of Knoxville offer?