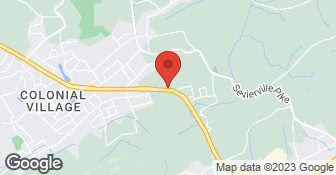 No payment is due until work is completed and approved by customer. Some subs are used, but one of our company foremans are always with them....

Company was very responsive. Gary and his crew showed up in the time frame expected. I had a ladder already in place to expedite the inspection. He was able to locate possible location of leak and used special caulk to seal the areas of concern. He also left me extra sealant in case Ieak still continues next time it rains

Description of Work
Investigate and fix leak on room

Was awesome. prompt. workers were polite and worked hard. will recommend

Description of Work
replaced facia board on home.

L & M was very professional, prompt, and met or exceeded all our expectations. Their estimates were fair; they provided a schedule of work and job specifications and met them all. We were very happy with their work and will definitely use them in the future.

Description of Work
Richard obviously knows what he is doing - very experienced and the work was preformed well. I was especially happy that he knew how to paint/repair textured ceilings, which other painters I talked with did not know how to do. He also painted my exterior block foundation and storage shed. Price was fair, and our dealings showed me that he was trustworthy. | |The only thing that bothered me (although it did not affect the high quality of his work) was that his preferred (actually strongly preferred) form of communication is text. I don't mind texting, as it is convenient for brief communication. However, I like to discuss nuances of my home improvement projects, which I don't feel like I can do with a text. There was more than one occasion when he asked me to text him after I left him a voicemail requesting to speak with him about details of the project. On the flip side, when you speak with him in person, he is very easy to talk with - friendly, knowledgeable, forthcoming and detail oriented. | |Overall, I think you would be in good hands if you hired Richard for about any painting project. I would be comfortable recommending him to a friend.

They showed up on time early in the morning, and were done by early afternoon. All the old shingles and debris were thrown into a large container they brought. They also did cleanup with magnets when they finished, to make sure there were no nails left on the ground. Several of the boards in my roof had been broken by the previous roofer, who didn't do any repairs before laying down their shingles. L&M replaced those boards when they removed the old shingles. They also did really good work around the chimney, installing a barrier to steer rain water away from the chimney and toward the gutters. The new shingles look really nice, and I've had no problem with the roof since the work was done. I also rehired them about a year later to install a roof vent for my bathroom fan. They did an excellent job on that as well, for about $250-300 (can't find the receipt for that).

Description of Work
Reshingled the roof on my house.

They installed a new roof, pipe boots and ridge vent. They did what they said they would do for the price agreed upon on the day scheduled. They did a good job.

Description of Work
Poured concrete patio. These guys have worked for me a lot. Replaced roof, built deck, painted house interior. They do excellent work. They show up on time and go to work. Will get them to build future garage.

We've had an intermittent roof leak for years, Gary could have sold us a new roof, instead he repaired our leak with a minimum of fuss and expense and repaired a few loose and broken shingles as well. The work was performed on time, as described. They cleaned up all their mess and left not so much as a cigarette butt. Highly professional, will use them in the future and would recommend them.

Description of Work
We had our roof replaced after a major hail storm. I did a lot of research into roofing companies before choosing L and M. Because the storm affected hundreds (if not thousands) of homes in the area, roofing companies were very busy and out of area companies were moving in. We are so glad we chose this company. They did what they said they were going to do, for the price they said they would do it for, in a timely fashion, and did an excellent job of cleaning up afterward. They respected our request to not drive in our yard. All around a quality experience. The quality of their work was excellent and they were more than willing to do extra things like facia work, even when we added it on at the last minute.

EXCELLENT! Material was delivered on time, workers began on time and the project was completed on schedule.

Description of Work
L&M was very responsive with the provision of their quote. They explained in detail the work to be completed as well as the materials (and any options) being utilized. The staff performing the work was professional and completed the job within the timeline that the project manager projected. I would definitely use this vendor again for the same service and would ask that they bid any other work that I have to be done.

Went well. There were many crews that came to the area from all across the US. Some not so reputable, some great. We had very good crew from FL that came and worked for Land M. There work was very satisfactory and they were very polite and considerate.

Description of Work
Very bad hail storm in April, 2011. Lots of damage in our area. Had to replace roof.

New roof put on parents' home. We received a settlement from the insurance company for hail damage. Nationwide recommended Land M and we were very pleased. They worked with us to stay within the settlement budget. They were always prompt and stayed within the submitted schedule. When I met with Robert and Gary (Land M) concerning my parents' home, I also mentioned my dismay about leaks in the sunroom of my home, especially around the skylights. Another contractor had made three attempts to fix the leaks after installing our roof. Robert and Gary took a look at the problem and gave me a reasonable estimate. I haven't had a leak since they completed the work. It's so nice for the job to be done right and the leaks to be gone!

Excellent service!!! Will use them again and highly recommend!

Description of Work
Awesome job! We hired them to replace our roof after numerous estimates. We found them to be here when they said they would, cleaned up after themselves everyday they were here and went out of their way to help in a time of stress. Did everthing they said they would. Thank you Robert !!

I am hiring for more work already. His helpers are very professional.

Description of Work
He did two roofs one at my home and one @ rental property.

This company did an excellent job. I would definitely recommend this company to anyone. The workers were friendly and the quote was right on target. The prices are great. They finished the job in a great amount of time and made sure to clean up all the debris that was left behind after the work was done.

Description of Work
Our roof was damaged by hail and we needed a complete replacement roof. We hired this company to install a new roof with asphalt shingles as well as install gutters. The roof is about 2400 square feet. The hail also damaged a window as well and we had them replace that too. All of this work was done at the same time.

Smoky Mountain Deck Builders specializes in custom Decks, Screen Rooms, Arbors, Docks, Under Deck dry ceilings, and Gazebos. Unlike a majority of companies offering deck services, we focus our business around our outdoor structures only, allowing us to perfect our trade with consistency, speed and efficiency. How can you be the greatest at what you do when you attempt several trades? We build beautiful outdoor structures 50 weeks a year, 5 days a week. Why only 5 days a week? How can you be passionate about your work without a personal life, without time for family? We do not expect you to believe in us, we expect you to believe real people in your community. Check out our reviews! Smoky Mountain Deck Builders  …

Our 3rd generation family business has been servicing Knoxville, Maryville, and our neighbors in surrounding counties for over 40 years. Our philosophy has always stayed the same, which is to establish a long term working relationship with our customers by offering industry leading equipment, warranties, and service at affordable pricing. We are proud to be a Tane Comfort Specialist Dealer, which means we are held to a high standard of training, continued education, service, and 100% customer satisfation.  …

At Thomas Waterproofing Company, you will never meet a salesman. You will meet an owner of the company to personally evaluate your problem. You won't have to sit through a 2 hour laptop presentation, and you’ll never be pressured into buying our service. With over 40 years of experience in the industry between the owners, you can be confident in the evaluation and solutions proposed to you. We will never compromise integrity for profit. We will offer the best, most affordable solutions to fix your issues.  …

Bonded
Insured
All statements concerning insurance, licenses, and bonds are informational only, and are self-reported. Since insurance, licenses and bonds can expire and can be cancelled, homeowners should always check such information for themselves.To find more licensing information for your state, visit our Find Licensing Requirements page.
General Information
Free Estimates
Yes
Eco-Friendly Accreditations
No
Payment Options
Check
Senior Discount
NO
Warranties
5 YEARS ON ROOFING WORKMANSHIP & LABOR

L & M HOME IMPROVEMENT is currently rated 5 overall out of 5.

No, L & M HOME IMPROVEMENT does not offer eco-friendly accreditations.

No, L & M HOME IMPROVEMENT does not offer a senior discount.

No, L & M HOME IMPROVEMENT does not offer warranties.

Are there any services L & M HOME IMPROVEMENT does not offer?