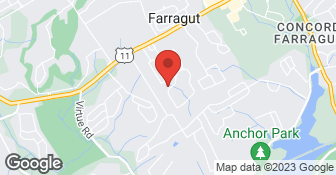 Concord Lawn Care, LLC has been proudly serving Knoxville for over 10 years. Our relationship with customers and attention to details has excelled our company. We are a full service Property Management company with insurance and liability....

In September 2019 my wife and I hired Charlie to install a paver patio and sod in the back lawn and install an irrigation system for the entire lawn. His team did a good job laying sod. The patio looked good for a few weeks, before efflorescence left a white stain where the stone steps leached down and across the pavers. Charlie told me in October he would return to clean and seal the pavers. I followed up with him in May 2020, and he again stated he would return to clean and seal the pavers. He never did. The irrigation system has been a nightmare. Trenches for the irrigation system left ruts across the lawn that were neither filled with sod nor planted with grass as required by the contract. Also, Charlie never winterized our irrigation system, as required by the contract, stating he could not keep his compressor running. On November 7, 2019, I informed Charlie by text that AccuWeather was predicting hard frosts over the next few days, and we needed to get our system winterized quick. Charlie told me to remove the back-flow valve and put it in the garage to keep it from freezing. He said he would get a new compressor and winterize our system on November 11. On November 13, after Charlie did not show up on the 11th and temperatures dropped into the teens, I sent him another text, to which Charlie responded he would winterize our system later that same day. Again, Charlie failed to show up. In fact, he never winterized our system the entire winter. On May 15, 2020, I replaced the back-flow valve and ran the system for a few minutes to test each zone. When I ran the test for the last zone, in the front lawn, water bubbled up from the ground and formed a small pool on the surface, and none of the front lawn sprinklers activated. After I made a few calls to Charlie, he finally showed up on June 15 and repaired three broken PVC pipes that I suspect froze and burst sometime during the winter. Charlie fixed the broken pipes, but he never returned to fill the hole he dug to make the repairs. The first two weeks of June, I filled the trenches and holes left by Charlie and his crew and planted grass where needed. Also in June, Charlie made a halfhearted attempt to repair a sprinkler that still didn't work in the front lawn and adjust the sprayers to cover the entire lawn. On June 29, I hired another contractor to clean and seal our pavers. He did an excellent job. On July 13, I sent Charlie a text explaining that I had replaced the sprayer that didn't work in the front lawn, but that didn't fix the problem. I asked him to try again to fix it. Charlie responded, "Yes sir. I also have cleaner for the pavers." I responded that I already had the pavers cleaned and sealed. On July 17, I sent Charlie a text asking when he might come out and fix the malfunctioning sprayer. As of today, July 22, I have not received a response from Charlie.

I was able to call Concord on very short notice and ask for a quick mow, edge and cleanup of our new home. They arrived the next morning fully prepared and ready to go. The team took the time to roll up our water hoses and moved our sprinklers. One call and they handled it all.

Description of Work
The team from Concord has taken care of our yard on 3 occasions to include and initial cutting and 2 additional as needed.

AFS Foundation & Waterproofing Specialist, founded in 2000, is a subsidiary of Groundworks, a family of companies that offers superior, proven solutions for your foundation repair, structural repair, crawl space encapsulation, dehumidification, and concrete leveling needs. They currently maintain offices in Alabama, Tennessee, Georgia, and Mississippi. AFS is a recognized accredited member of the Better Business Bureau and devotes its years of experience, industry knowledge and specialized training to help customers protect their homes or commercial buildings from water damage, concrete sinking, and foundation failure.  …

Make Stressful Plumbing Problems Disappear!! Plumbing problems are frustrating and stressful! The Plumbing Authority provides dependable plumbing solutions. We send licensed plumbers to your home so you can relax knowing your problem is solved. At The Plumbing Authority we know that you want to be able to relax and not deal with plumbing problems. Undependable plumbing causes you stress and frustration. You deserve to enjoy your home without worrying about your plumbing. We don’t just care about plumbing. We care about you and your home. We’ve helped thousands of homeowners solve their plumbing problems for over 25 years. Don’t let unexpected plumbing issues ruin your day. Instead find relief when you call or schedule online and let us help you get comfort back in your home  …

Bonded
Insured
All statements concerning insurance, licenses, and bonds are informational only, and are self-reported. Since insurance, licenses and bonds can expire and can be cancelled, homeowners should always check such information for themselves.To find more licensing information for your state, visit our Find Licensing Requirements page.
General Information
Free Estimates
Yes
Eco-Friendly Accreditations
No
Payment Options
Check
Senior Discount
No
Emergency Service
Yes
Warranties
Our goal is to build relationships that will impro

Reliability and communication make our customers' retention and satisfactory rate. Our staff is devoted to making all our properties the most attractive in Knoxville.

We also refurbish homes, build decks, and additional services are available upon request.

Concord Lawn Care, LLC is currently rated 3.5 overall out of 5.

No, Concord Lawn Care, LLC does not offer eco-friendly accreditations.

No, Concord Lawn Care, LLC does not offer a senior discount.

No, Concord Lawn Care, LLC does not offer warranties.

Concord Lawn Care, LLC offers the following services: Reliability and communication make our customers' retention and satisfactory rate. Our staff is devoted to making all our properties the most attractive in Knoxville.

Are there any services Concord Lawn Care, LLC does not offer?

We also refurbish homes, build decks, and additional services are available upon request.