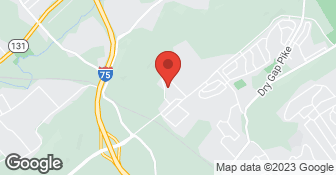 Since 2002 All Seasons has served the greater Knoxville area providing exceptional landscape services with great pride, professionalism and strong Christian values. We are family owned and operated with Ryan holding a Associates Degree in Turfgrass Management from Walters State Community College in Morristown Tennessee. We also attend continuous training from the University of Tennessee and John Deere landscapes on a yearly basis to continue to stay on top of the latest trends in the landscape industry. We employ high trained individuals who hold certifications in Tennessee state pesticide Charter and spray licenses and also certified in Backflow Testing and Repairs. All Seasons maintains some of Knoxville most prestigious landscapes and would love to maintain yours today!...

No reponse. Never received any correspondence.

They were very prompt in response and coming out to give estimate. They do good work for very reasonable prices. Will definitely use them again. A+++++++++

They're really knowledgeable, and friendly, and always show up on time.

They were excellent. They were very responsive, and thorough. The price was very reasonable. The follow up was awesome as well. This was my first time using them, and would absolutely recommend them.

Description of Work
They repaired my irrigation system, and gave me an estimate on landscape.

I contacted Lee with All Seasons regarding leaf removal and he gave me an estimate very quickly, then got the work scheduled and completed within a few days. Price was comparable to another provider, and communication was great along the way - they let me know when they were arriving, that it would take two trips, etc. I wouldn't hesitate to use All Seasons again, definitely recommend.

All Seasons responded quickly with an estimate. Their price was competitive. They got me on their schedule quickly, showed up when they were supposed to and did a fantastic job. I had lots of leaves so I didn't want them just mulched and left on the ground. They removed all the leaves and left my yard looking great. I've already recnommended them to friends.

Great- communication was fast and concise. They did a great job, got all the books and crannies. Will definitely use them again.

On time, on budget, excellent work. They were here on time, no delays. They were all work. Not one of them took a break and worked for 1 1/2 hours removing a lot of leaves. They have the equipment to do it quickly and efficiently. They staff were very friendly and professional. I could not ask for a better job. This company is a step above the best. Kudos for a wonderful job.

Description of Work
Remove leaves from my yard and my neighbors

came out the day after called. vacuumed up very large pile of leaves beside driveway. did a good job.

Things went great. I went through the difficult process of creating several large piles of leaves in my yard. A guy came out and gave us a quote, then had some guys come that day and pick them up. They were very efficient and made my yard look 10 times better.

Description of Work
Collected all the leaves in my front yard.

Awesome job! Showed up and did the entire job in 40 minutes! It would have taken me hours!

Description of Work
I had leaves removed from the yard.

We did not have any work completed but will remember then for future projects.

Description of Work
They quickly responded to some questions I had regarding service. We ended up holding off on the project but will be sure to contact them in the future

They gave me an estimate that was too high.

Wonderful!! They just show up when the grass needs attention. Another worry taken off of my shoulders.

Description of Work
We use these guy's twice a year, Spring & fall. They aeriate and feed in the spring. and aeriate and overseed in the fall. They have made our non-existent lawn really flourish! And the price is very affordable!

Always willing to accommodate special needs. Will continue to use.

We did not select this company for our landscaping project but would highly recommend them to others. The reason we selected another contractor was simply based on a high recommendation of another contractor from a close friend . All Seasons was very responsive and provided a very competitive price for our project. We were very confident they would have done an excellent job.

Description of Work
Provided an estimate of landscaping including installation of irrigation and grading and resoding our lawn.

Overall, I was satisfied. They were friendly and courteous.

Description of Work
All Season's Lawn Care did lawn irrigation for me.

All Seasons Lawn Care (I spoke with Lee) was contracted to winterize my home irrigation system. A representative came and performed the winterization. I attempted to replace the back-flow preventer (removed during winterization) and discovered that the "cartridge type" back-flow preventer had been removed incorrectly and the wrong fitting was put in place making it impossible to re-install without significant plumbing changes. I calledLeeto ask for it tone repaired and explained what had happened. He first explained to me what I needed to do to fix it and became belligerent when I expressed that his staff had made a mistake and I expected them to repair it. It begrudgingly said, I'll be out there Monday morning...at first I accepted, but after consideration I called him back and said no thanks, I'll fixit myself. I will not recommend!

Description of Work
All Seasons Lawn Care was contracted to winterize my home irrigation system. A representative came and performed the winterization.

I couldn't be happier with the quality of work and the cost. Front, back and side yards were raked with complete leaf removal. Will absolutely use them again next season.

Description of Work
Significant leaf removal from our half-acre yard.

This provider was contacted for my mother. He was prompt in replying and estimating his services to provide her lawncare weekly. He was polite, respectful, and very reasonable. He was also very reliable and did a very good job weekly. He is still servicing her lawncare needs and has been the only person whom I have contacted over the past several yearsthat has done so. My mother is very happy with him.

Some occasions that work done was not satisfactory - but remediedied by staff as soon as brought to the attention of owner. Price includes weed maintenance.

Description of Work
They mow and trim lawn during summer months.

It cost somewhere in the hundreds, and we were able to find someone cheaper for this particular job. They are still really nice people!

Description of Work
They did some mulch work for us.

We have used them for probably 3 or 4 years for the winterizing. They always call me to remind me when it is coming up which is nice!

Description of Work
They winterized our sprinkler system in the Fall.

The service was good and it turned out fine! The price was competitive and similarly priced to a company I had previously used for this job.

Description of Work
They picked up all the leaves in my yard.

My wife and I recently moved to the area and needed lawn care for our new house. I called All Seasons (on a recommendation from the previous home owner) and asked them to come out and provide me with an estimate. Lee and Ryan came out to the house to take a look, and gave me a quote of $40 to mow, trim and blow our yard. The first and second mowing looked great (could be that it hadn’t been mowed in way too long). However, the quality began to decline rapidly. I called Lee to complain that one area of our lawn was showing ruts from their tractor. He said that they didn’t have many options, but that he would talk to the crew. The next time they came out, they mowed it the same way and made it worse. While this was happening, our sprinkler system stopped working. I asked Lee to come take a look at it, so he sent Ryan out. He was unable to locate all the stations or get the system working. He told us the main box was broken ($250) and charged us for an $85 service call. I got a second opinion. The irrigation company came out, identified a broken line and fixed it. They also got the system working the same day without replacing the box (which was not faulty after all). When I called Lee and suggested that he consider using the $85 service charge to cover our outstanding balance of $80 since they didn’t get the job done, he told me to, “take that $80 and stick it where the sun don’t shine.” He proceeded to tell me how I’d been nothing but a pain and that he hoped never to hear from me again. That won’t be a problem. Too bad we’d already sent the check in for our last payment. Needless to say, our relationship has ended. As a consumer, I don’t think I don’t think I asked too much from All Seasons. I just hope someone reads this review and decides to look elsewhere for their lawn care and irrigation needs.

Description of Work
I hired All Seasons to mow the lawn in our new house for the summer. I also had them come out to check on our irrigation system when it stopped working.

We specialize in excavating, leveling, dump truck hauling , gen. Yard leveling , drainage. ( for driveway). Etc. footers and more! Stone, gravel or sod delivered and leveled. We guarantee your satisfaction and we won’t leave until the job is done right. We pride ourselves on the quality work we provide, ( striving to please, the lord).! while delivering great customer service! Check out all the services we offer below and call -- or-- click to schedule a free estimate today!  …

Specializing in CONCRETE AND MASONRY SERVICES! We always guarantee your satisfaction and won’t leave until the job is done right. We take pride in ourselves and on the quality work we provide, while always delivering great customer service! Check out our services offered, then call --or-- click to schedule a free estimate today!  …

How is All Seasons Lawn Care overall rated?

All Seasons Lawn Care is currently rated 4.6 overall out of 5.

What days are All Seasons Lawn Care open?

All Seasons Lawn Care is open:

What payment options does All Seasons Lawn Care provide

No, All Seasons Lawn Care does not offer eco-friendly accreditations.

Does All Seasons Lawn Care offer a senior discount?

No, All Seasons Lawn Care does not offer a senior discount.

Are warranties offered by All Seasons Lawn Care?

No, All Seasons Lawn Care does not offer warranties.

What services does All Seasons Lawn Care offer?