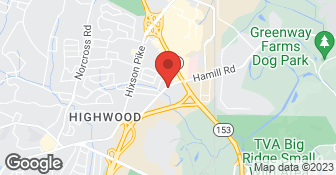 They never showed up for the appointment and did not call to explain or reschedule. Extremely unprofessional!

Description of Work
Set up initial appointment for consultation of pests in attic.

We were satisfied with service and results

Description of Work
trapping and removal of raccoons

Very well. They were punctual, did a good job, and we decided to subscribe to their service

Description of Work
Treated the inside and outside of house.

I can't say enough good things! Price, punctuality , professionalism, and knowledge of the problem and solution were all excellent.

Description of Work
Great Service at a great value

They could be more communicative. They could let us know when they're coming and give us an update of what it is they're doing and how it changes season to season. They're always very polite when I see them.

Description of Work
We use Jody Millard for pest control.

I think they did a great job. I just had history with Jody Millard so stuck with them. I would recommend them to others. Price wise I think they are comparable. It was not like it was a great reduction or anything like that but I think I have got a good product at a reasonable price. I think I have got a great product. I have used them in the past for other things and they have done very well.

Description of Work
I use Jody Millard Pest Control for pest exterminating. They installed Sentricon for termite extermination.

Thank you for taking the time to post a review. Please let us know if there is ever anything we can do for you. Thanks again for choosing Jody Millard!
5.0

The gentleman who came to my house for the initial inspection was very thorough and polite. I learned a lot about the nature of termites, different types of roaches, spiders, and other pests and how to control them. He told me what to look out for and how to prevent infestations. The following schedules were made for pest control and termite control. He also put up with my goofy sense of humor and suggested I not napalm the roaches like I'd wanted. Ha. The pest control technician was incredibly thorough. He sprayed literally every crack and crevice of my house inside and out, and asked appropriate questions to make sure he didn't leave anything out. In addition to the pest spray he also cleared away all of the spider webs around my house, applying a product that would help keep them from wanting to rebuild in the future. He offered helpful tips as well, showing me an area of ant-invasion I wasn't even aware of on my deck. The fact that he noticed something so subtle will allow me to fix it now before it becomes a serious issue, so thanks for saving me some serious repair bills later down the road. I wasn't there for the termite service but when I got home that afternoon I saw that all of the appropriate work had been done and a work order left at my door. I don't remember what they're called, the little green traps/poison centers/whatever are buried all around my house. I feel very confident that the people who did the work were honest and earnestly seeking to do their very best. I've got dead roaches to prove that their product works. At first I was leery of trying something and quot;greenand quot; but it's low odor, kills the pests, and I feel good knowing it isn't going to harm my baby.

We've been pretty satisfied. They are reasonable and they do what they say they will do. We have been using them for 1 year.

Description of Work
They do monthly and quarterly prevention. They spray the yard and by the pool.

One of my neighbors works for Jody Millard and he came over and gave me an estimate on his time off. I signed the contract and we set a date for the service to be done. Unfortunately, the scheduled day came and nobody showed up. I called the company and apparently there was some miscommunication. They asked if I would mind if they came out the next day and I agreed. The young man they sent out was so nice and extremely professional. He performed the work and finished up very quickly and explained how the ground traps worked. I have signed a renewal contract with them.

Jody Millard comes every year to inspect my home however, the last 2 years we have had additional needs due to termites. The. Manage to get rid of them but according to our contracts they are supposed to prevent them...as long as they repair the damage done to my floors per our contract I will rank them an A+! They are always prompt and polite.

They were very knowledgeable and responsive. They had a repair warranty and availability. They did a very thorough pest control inspection. Their pricing was reasonable. They had state of the art techniques for exterminating.

Description of Work
I needed to have a termite inspection done to close on my home.

They do termite inspection and spray inside and out.

Description of Work
I have an annual contract.

They provide excellent service. The price is fair. I will continue to use them in the future.

Description of Work
They perform pest control services for me.

We can call them even if ants show up in between service calls and they show up to take care of things free of charge.

Description of Work
We use them for pest control services. They come out quarterly to spray.

This is a note of caution when selecting a pest control service for termite protection. The vast majority of pest control services do NOT cover contents or structural damage to your home from termites. And if they do, they offer extremely low caps of around $5,000. Don't assume anything, be sure to check your contract and ask questions. Since 1997, we had contracted with Jody Millard Pest Control for termite treatment, which we faithfully renewed annually. In June 2011, once again we renewed our termite treatment and our home was treated June 13, 2011. On June 25, 2011, my husband noticed the steps to the deck were loose and when he pulled them apart we discovered thousands upon thousands of insects eating the wood from the inside out. It was a Saturday and the office was closed, so I notified JMPC through their website via e-mail. That Monday, I called the office and this was when--much to my surprise-- I found out that after the initial hefty fee paid in 1997, the annual renewal fee of $75 basically covered nothing but termite treatment. JMPC would come out and re-retreat at no additional cost, but that was it! We had no damage coverage and upon calling our homeowner's insurance found out they didn't even offer termite coverage. At this point I was frantic, not knowing if the termites had burrowed into our wooden home. I immediately called the two national pest control services and scheduled appointments. The JMPC inspector did eventually re-treat on Wed, June 29, 2011, when no one was home, leaving a receipt with no charge. Both inspectors from the national pest control services came, did a full inspection, and verified the damage was from termites; but was fortunately limited to the deck steps. Each inspector informed me that neither of the companies offered coverage for decks, but did offer protection for our home. Armed with verification of termite damage, I called JMPC to find out what his verdict was. The JMPC inspector eventually called me back and informed me that we did not have termite damage, but carpenter bee damage. Carpenter bees NOT carpenter ants and I asked him this 3 times to be sure. We had carpenter bees at our previous residence, and I knew the insects I had seen were definitely not carpenter bees and neither was the damage, because they bore large individual holes visible from the outside NOT lengthy tunnels from the inside. The moral of this story is: People do what you inspect, NOT what you expect!

Everything was fine. They came out when they said they would. They generated a report, and I had no problem. Their pricing was fair.

The inspector was a sober fellow, but located the entry point. He mapped the layout of the house and explained the process, leaving explanatory literature. When I requested service right away the office secretary arranged for help the following day. The workers were pleasant, accommodating about not disturbing foundation plantings (they had a way of inserting a rod instead of digging a trench). They completed the work in several hours, cleaned up after themselves, with minimal inconvenience. The workers explained that the termites would be dead in about 2 1/2 weeks. We watched for evidence and found they were right.

Description of Work
Inspected under the house and the garage. Found where termites were entering in the garage. Made a trench around the foundations and pumped in poison, drilled holes in garage floor and inserted poison, recemented holes.

They did not return phone call, therefore lost the business.

Description of Work
I needed help ASAP with an active termite infestation on an in-progress renovation.

Although the person was professional that came to our home and they seemed to do a good job of spraying for all the general bugs, we still have a problem with black ants. We really wanted this infestation destroyed, but it hasn t been as of yet. The price was really good for what they did and we will give them another chance.

Description of Work
They sprayed the inside of our 1400 square foot home for general bugs, but mainly for black ants. They were here around forty-five minutes or so and this was not part of a service contract.

We offer exterior house washing services Chattanooga area, as well as a host of other pressure washing services, too. My team of professional exterior surface cleaners are excited to work with home owners all throughout the area, and we believe that you will be highly satisfied with our dedicated customer service and our superior workmanship skills. We honor those who have served and offer a 10% discount to all veterans.  …

Our company was founded by Jonathan Smith a resident of Tullahoma and the Middle Tennessee area for his whole life. Jon had a mission and that was to create the BEST lawn care company ever known to man. That meant providing excellent service and quality work at any cost. Jon also wanted to cater to each customer individually so he chose the best software to allow us to create a lawn care plan for each individual customer. Not all lawns have the same needs. This will ensure that all of our customers get the service they need when they need it.  …

Peak Cleaning offers full service, residential and commercial, window cleaning, pressure washing, and gutter cleaning. Our mission is to provide a high quality service at the price you need. We will get your property looking Peaky Clean!  …

JODY MILLARD PEST CONTROL is currently rated 4.6 overall out of 5.

No, JODY MILLARD PEST CONTROL does not offer a senior discount.