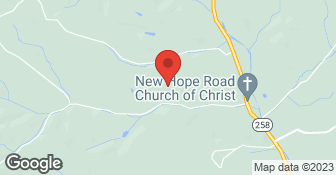 We are a Licensed General Contractor specializing in home remodeling of any kind . We offer a 3 D kitchen and bath design services . We can design additions also . Been in business for over 45 years . We are a Christian family owned and operated business . A member of the BBB . We do all sizes of projects . We offer qaulity service at an affordable price . We cover middle tennessee . We represent homeowners on insurance repairs . We would love the oppurtunity to work with you. Additional email - info@billscontracting.net....

I was very pleased with the work Billy and his team performed in remodeling my bathroom. They showed up on time and respected my home, which was important since I couldn't be home during the day for them to complete the work. The drywall and tile work is particularly impeccable, and everyone I encountered was very respectful. It was clear everyone who did work was an expert in their particular are...

It went great. They were on time cleaned up after themselves they were professional and the price was reasonable.

Description of Work
We hired Billy in late 2010, early 2011 for a kitchen remodel. In addition to fully redoing the kitchen we also had him take a wall out that separated our kitchen from the living room. Our first impression of Billy was decent. He had some good ideas and his quote was very competitive compared to others we had received. There were a few things that he disagreed with us on or tried to talk us out of, which was a bit annoying, but probably par for the course with some contractors. | |The biggest challenge for us with the project was that we had two young children and this affected the main living/entrance area in our house so during most of the heavy demo and construction part the kids couldn't be in the house. We tried to nail down dates as tightly as possible so my wife could plan accordingly for having the kids out of the house, but there were several gotchas during the process that were not communicated well to us. One such example had to do with installing and finishing the hardwood floors. We had told Billy that my wife was going to be out of town with the kids during a very specific window in order to allow this work to be done, but somehow it was still not communicated to us when things were supposed to happen with that installation, so they ended up rushing it. The end result looked ok, although the flooring company did a relatively poor finishing job. The biggest issue that we're facing now is that the new wood flooring that they installed is "cupping" because it was not allowed sufficient time to acclimate to the new space. This could have been avoided with better communication from the contractor. | |Our worst experience had to do with our cabinets. Billy communicated to us early on who he was going to be using to build our cabinets, and we had been in communication with that cabinet-maker to work out some of the details. We suddenly found out later, not from Billy, that he had switched cabinet-makers because the first guy couldn't meet his budget. I found this out during a very awkward conversation with the first cabinet-maker when he told me that he hadn't heard anything from Billy about the project. Once the cabinets were done, they weren't even what we had discussed with Billy to begin with. The design on the cabinets was different than what we wanted. Additionally, we were informed that the cabinets came with a 10-year warranty, and after just a couple of years of use, the paint started chipping on several of the doors and boxes. We contacted Billy about this in the fall of 2014. After more than a dozen calls, several cancellations and one no-show, he finally came over to the house to look at the cabinets. His first impression was that this was normal wear and tear. After inspecting the cabinets a bit further he agreed that it was probably a bit more than that, but he would have to touch base with the builder to see what could be done. Lo and behold, that cabinet-maker is no longer in business (so much for our 10-year warranty). Billy offered to have someone else come out and spray the cabinets inside the house, but this is something that we would have to pay for. I have no desire to pay Billy any additional money for any additional work. | |I would give the work that was done overall a C-rating. For the most part we were satisfied. However, Billy's communication and level of professionalism is truly poor. We grew very weary of bad communication, un-returned phone calls and no ownership or apologies for mistakes. I have learned in dealing with contractors that this is more the rule than the exception, and while that may be, with our experience, I can't possibly recommend this company to anyone.

A neighbor had recommended Bill's Contracting and he came to see the scope of the work I needed to have done. As soon as my materials arrived, I called and he was able to complete my work the very next day. He and his crew arrived on time, took care to cover my hardwood floors, professionally completed all the taskes requested. Needless to say I am thrilled to now have my kitchen complete. I moved...

Description of Work
Bill and his crew installed a ceramic back splash with materials which I had purchased. They also relocated a desk and cabinet as well as installing open shelves. Everything done within 8 hours.