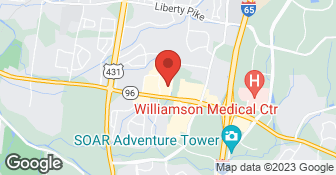 Sweeps & Ladders is a full service chimney company serving Middle Tennessee. We are firefighter owned and operated and we bring over 13 years of firefighting experience to every job. We use our knowledge of putting fires out to prevent them from happening in your home. I have dedicated my life to serving the public, so let us help you keep your chimney and dryer vent safe from a fire....

They arrived when they said and did a thorough job.

Professional, courteous, and well priced. Best service I've had in a long time.

Description of Work
Chimney inspection. Licensed technician used a digital camera to fully inspect the interior of the chimney. He then performed an exterior inspection. He then took the time to explain how to properly start/ burn/ feed a fire since we have never had one before. Very satisfied!

Our impression was good. They did what I wanted them to do. So far it is shown positive. We had a leak in the chimney and we haven't had one since then. It takes rain coming from a different direction and it has come, it's been that we've had some pretty good rain and I haven't had a leak. At this point I'm pleased. I had some other bids and they came in cheaper. What they had done they got the job done for a lesser price for me.

Description of Work
I used Sweeps & Ladders for Chimney repair. They did some repair on the outside of the chimney to the bricks.

I had previously had another company inspect my chimneys and said I needed $6000 worth of work. Mr. Nelms came and said chimneys were clean and were in great condition. I am glad that I did not trust the other company and their quote and found an honest person. I will be using him yearly for chimney inspections and any repairs down the line.

Description of Work
Mr. Nelms was asked to Inspected and clean chimneys (2) before use.

Tommy Nelms was prompt gave us a two hour window when he would arrive. He did the work in a professional manner. He was friendly and helpful. I asked him several questions and he answered all satisfactory. Tommy did the work on two separate days. The first day he removed old crown and poured the new one, sealed the bricks, ground out old mortar joint then tuck pointed in the new joints. A week later he came back and added the crown seal at my request. I would use Tommy again.

Very personable, knowledgeable, and more than willing to explain the problem and solution. For the first time in quite a while, I feel comfortable that heavy rains will stay outside!

Description of Work
Fixed motor joints that were causing leaks and coated bricks to repel water.

My 1st contact with the company was in late October or November 2012 .. I was told the wife was going to have a baby, the husband would be taking off till the 1st of the year; an appointment was set for January 2013. Although I had described the woodstove I have, the installation and how it works with the fireplace, and sent a picture, when he came, he was by himself and not prepared to move the woodstove in order to clean the fireplace/chimney properly. While here, he suggested that I contact my local fire station to request installation of a smoke alarm they were providing, which I did, and appreciated being given information about the smoke alarm program.. A 2nd appointment was scheduled. That was cancelled by the company. A third appointment was scheduled. That was cancelled by a change in my schedule and a fourth appointment was set. That one was kept. The cleaning was quickly accomplished. A canvas was put down to protect my rug/floor from stray ashes. In summary, I was generally satisfied with the services .. had chosen this company because they were about $100+ cheaper in price than Ashbusters, and cost is an issue for me (Ashbusters had advertised a $99 special, but declined to honor it). It was disappointing to have missed using the woodstove this past winter. I was also told that the fireplace had cracks in the flue tiles, so I'm still not able to use the woodstove until I'm able to get a liner for the chimney.

I know some bricks in my chimney had been crumbling for a couple of years. What I found out later was that painting of the brick chimney in 2006 contributed to that. Wish I'd known that before. Our first estimate was for total replacement of the chimney for $5,200+. Sweeps and ladders was able to replace and repair the crumbling bricks for less money which was good for us. They were very attentive. They communicated mostly by email which is not bad as I hate playing phone tag with repair professionals. I have the sense they were a smaller operation and it was difficult for staff to spend much time on the phone. Overall a very positive experience.

Mr. Nelms performed all services from the estimate visit to the repair as promised. Very professional.

Description of Work
Replaced our chimney cap and prepped the area to prevent leakage.

Tommy Nelms did an excellent job of repairing my chimney masonry. He gave me a fair and accurate quote of the repairs that needed to be made and was punctual and thorough in delivering what we had quoted me. I've since had no problems with work he completed and I'd use his services again if need be. A+ Job!

Description of Work
Leak in Chimney Repair included: Removed old silicone from previous contractor (Titan Exteriors) that did a terrible job of fixing the problem. He then tuckpointed exterior mortar joints, painted my chase cover, installed a new storm collar, and then watersealed the whole chimney.

We offer quality service at an affordable price. Contact us today about a free estimate!  …

We have been in business for 16 years and we service the Middle TN area. We offer free estimates. 10% off if you mention you heard of us through Angi.  …

Insured
All statements concerning insurance, licenses, and bonds are informational only, and are self-reported. Since insurance, licenses and bonds can expire and can be cancelled, homeowners should always check such information for themselves.To find more licensing information for your state, visit our Find Licensing Requirements page.
General Information
Free Estimates
No
Eco-Friendly Accreditations
No
Payment Options
Check, Visa, MasterCard, American Express, Discover
Senior Discount
No
Warranties
Yes

How is Sweeps & Ladders overall rated?

Sweeps & Ladders is currently rated 4.8 overall out of 5.

What days are Sweeps & Ladders open?

No, Sweeps & Ladders does not offer free project estimates.

No, Sweeps & Ladders does not offer eco-friendly accreditations.

No, Sweeps & Ladders does not offer a senior discount.

Are warranties offered by Sweeps & Ladders?

What services does Sweeps & Ladders offer?