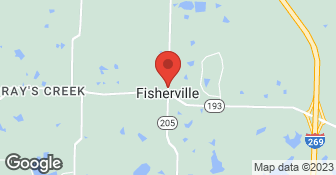 Century 21 Construction, LLC is a construction company specialized in masonry and carpentry. Masonry includes brick, stone, block, tile, and concrete. Carpentry is available for new and existing projects! We also make wonderful pergola’s and arbors! Our staff combined has over 50 years of experience. We are local and looking to earn your business. Call us for a free estimate now! 901-437-1098  …

Call Us Today @ (901) 282-7918!!! Landscaping Business Solo Landscape is a locally owned and operated Memphis-area small business dedicated to quality landscape and supreme customer service at reasonable prices. Browse through our portfolio and services to discover how Solo Landscape can beautify your home or business.  …

Green Earth, LLC has been in business since 2009 servicing the east part of Shelby County. The President of the company has a degree in Golf Course Landscape Management, with a minor in Soil Chemistry.  …

I used them to construct a new high end custom gunite pool which they guaranteed, in writing, would be timely completed ASAP. They came highly recommended from my awesome builder Magnolia Homes. Lots of promises and guarantees on the front end but as soon as the contract is signed and they obtain most of the payment for the new pool construction - all bets are off. They repeatedly disappeared for many days at a time, communication is dismal (unless you contact them - repeatedly), items not completed as contracted, selections not followed, and still waiting for final completion of the project going on 3 months now (despite being told 6-8 weeks). In addition they claimed that one of the many benefits of going with them was that they could immediately contract to do weekly service after construction. Well now they can’t do that either. If I had to do it over again I certainly would have utilized Memphis Pool who not only does high-end custom pools but backs it up with actions as they have been very helpful as I try and clean up the mess created by Hawaiian Pools that appears to never end!

I would use this company again if needed.

Description of Work
They installed our new pool.

They are the best!!!! We have had our pool for 2 years and we can not say enough good things about this company. Before we chose Hawaiian Pools and Landscape we had five bids from other companies. We did not choose the cheapest but the company we felt the best about. Boy were we right. The pool went in with no problems. Everyone was so nice.. Being as we are new pool owners there have been times that we have had to have some help and Kristie in the service department is the best. If you are looking to put in a pool call them it is worth your time

Description of Work
Opened up our pool for the summer

Very professional. They kept us informed every step of the way and showed up when they said they would. Love the pool and we are very pleased.

Description of Work
In ground pool

Overall it was great. We had an inground pool with a sheer decent waterfall installed. Our salesman was great and patient about explaining the options and knowing what we were looking for. Everyone that did any work at our home was very professional and clean. The entire job took a little longer than we expected but the end result was worth it. We did have a couple of hiccups along the way like a bad pump but Hawaiian replaced it right away. They even maintained the pool during the entire process of the installation even on days when there was no work being done--someone was there maintaining the water. We finished pool is spectacular. We are enjoying it very much. I have confidence that they will be there should any unexpected issues arise. They installed a quality pool at a great price.

We chose them because of the pricing.

Description of Work
We have a pool that they refinished for us. They also put new tile around the outside of the pool.

We recommended this company to five other people because of their great service. They are always on time and very precise with the work that they do. I am always pleased with the service and I will continue to recommend them to everyone that needs the service. The employees are friendly and answer all of your questions.

Description of Work
This company built and maintains our pool, but the last thing that they did for us was change the filter out with a new one.

This company did a lot of work and the crew was helpful, nice, and courteous. They took their work seriously and the whole design layout was just spectacular. I really enjoyed their services. They were honest people to work with and they did great work.

Description of Work
They built an outdoor cavane. They used Arkansas field stone for the flower beds and they did some brick work around the flower beds.

All around they did a good job. I would use them again.