Got You Covered Roofing 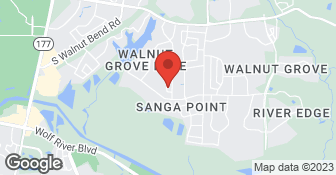 Serving Memphis, Tennessee & the Mid-South with the highest quality roofing services and materials. Got You Covered Roofing is a GAF Master Elite Certified company that deals with residential roofs. We provide FREE roof inspections due to storm damage from wind and hail. We also provide FREE estimates using satelite imagery via EagleView Technologies. We work closely with many storm adjusters and most insurance companies. Got You Covered Roofing, LLC is licensed and insured....

Great company! They even came out a second time to look at the roof and did not charge me. Can't beat the friendliness and quick response. I will always use them for my roofing needs.

Description of Work
Roof was inspected for leaks and damage.

David had done a great job installing our roof and I called him back to do this. And, like the roof, he did a great job on this too. Very professional, prompt, reasonably and does quality work. Highly recommend!

He is on your list. He is good. He used a product that I already used on my garage. He was very courteous, got the work done very quickly, gave me an estimate very quickly and took care of it.

Description of Work
I used Got You Covered Roofing last month.

David Stolzle and his crew came in did their job, cleaned up the debris and left. Mr. Stolzle was very professional, honest and reliable from the beginning to the end. I highly recommend them.

David Stozle was great to work with on my emergency roof replacement. He helped me with the insurance adjuster and clearly outlined the process and my options. The damage occurred after our Dec 2013 ice storm and was discovered a couple weeks later putting the schedule for making the repairs during the week of Christmas. His crew came out two days before Christmas and worked to get all the work completed before the holiday. He even came back the day after Christmas to seal a section of my fireplace that he noticed was letting in water. Great service, great price and terrific quality. So proud of my roof!! House looks wonderful!

Everything went just as promised. I was very pleased. David went out of his way to do the extra's that made this roofing job seamless. His crew was excellent!!! Everything was cleaned up and put back in its place. This was the best experience I have ever had in dealing with a contractor of any kind.

The workers showed up by 7 a.m. They began the job by 7:30 and didn't leave until it was almost dark that evening. They stripped the old roof, and found that 29 deck boards needed to be replaced. (All pictures were taken of the job as they were progressing.) The job took a day and a half and plastic tarps were placed on the roof in case we had rain. We did have rain and nothing leaked during the night. I can't believe the difference! My little house looks like a new home. They did such a beautiful job! The workers were very friendly and pleasant and the whole experience was such a pleasure. If I could give them a higher rating than an A, I would! They deserve a higher grade. My neighbors came down to look at the finished project and commented what a beautiful job they did. I would recommend them to friends and neighbors. Great company to work with. They cleaned up after the job and did a great job. I recommend them highly!!!

Description of Work
David Stolzle came to our home and looked at the roof and gave us such a fair and honest estimate. Not only did he price the job cheaper than all the roofers in our area, but he gave us a better quality shingle. While inspecting our roof, he noticed that we had a problem with our chimney. He gave us a price on the repair of the chimney as well. All roofers that inspected my roof NEVER mentioned about the Chimney! Dave was the only person to mention this problem to us and showed us pictures. What a fair, honest person! I would recommend him to anyone who is looking for a roof. Not only was he fair and honest, but he was such a pleasure to work with.

David Stolzle is an incredible person. He has an excellent crew. I was most impressed with the fact that cedar siding had to be removed and replaced instead of repaired. David had the siding replaced and matched the paint of the house before leaving job. This was not part of our contract. They also go into the attic to lay a plastic covering to catch all the debris. After the installation, the crew carefully cleaned up all areas and replaced patio furniture to it's original place. They then went into attic to collect the plastic covering and swept the stairs and flooring before leaving job. Couldn't have asked for a more efficient contractor.

We became aware of Got U Covered when they did some work on another house in the neighborhood. I liked what I saw of the work they did, and asked my neighbor; he recommended them, so we got a price. i was impressed with Got U Covered and with a competing company, but Got U Covered was several hundred dollars lower on their estimate. They came and did the work and did it on schedule. Dave Stolzl did a good job of overseeing the workers, and the workers seem to have done a good job - it's been nearly 6 months, and all seems well. We have many plants close to the house and we are on a fairly small lot, but the workers did a good job of protecting things. My only concern was that Got U Covered was not a member of BBB; that caused me a little "angst." I strongly encouraged Dave to join - not sure if he ever did.

Description of Work
Replaced my roof and two skylights

David was very prompt in providing roof assessment, written quote, scheduling work, and communications. Excellent crew completed work in two days. Job was done in quality manner, with attention to every detail. Property was protected and clean up was excellent. I received other quotes and David was competitive, without all the gimmicks that others do.

Description of Work
Complete new roof with architectural shingles and lifetime warranty, including tear off of two layers and replacement of some damaged sheathing and trim.

Frequently Asked Questions & Answers about Got You Covered Roofing

How is Got You Covered Roofing overall rated?

Got You Covered Roofing is currently rated 5 overall out of 5.

What payment options does Got You Covered Roofing provide

Got You Covered Roofing accepts the following forms of payment: Check, Financing Available

Does Got You Covered Roofing offer free estimates?

Does Got You Covered Roofing offer eco-friendly accreditations?

No, Got You Covered Roofing does not offer eco-friendly accreditations.

Does Got You Covered Roofing offer a senior discount?

No, Got You Covered Roofing does not offer a senior discount.

Does Got You Covered Roofing offer emergency services?

Are warranties offered by Got You Covered Roofing?

What services does Got You Covered Roofing offer?