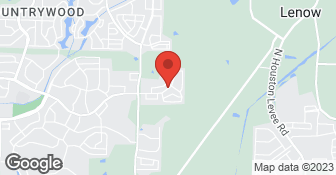 Century 21 Construction, LLC is a construction company specialized in masonry and carpentry. Masonry includes brick, stone, block, tile, and concrete. Carpentry is available for new and existing projects! We also make wonderful pergola’s and arbors! Our staff combined has over 50 years of experience. We are local and looking to earn your business.  …

Andrew was diligent and went out of his way to make everything go smoothly. The work appears to be done perfectly.

Description of Work
Reconstructed the woodwork around a chimney and fixed another hole in the trim at the side of the house.

Went well, he was very professional and pleasant.

He came to check the house to see if we needed extra protection to prevent squirrels and rodents from coming in. He came right away for a free estimate. He gave a pretty thorough overview of the house and decided we didn't need anything except trimming the trees back, which we could do ourselves. He was very professional and on top of everything else he offered me an ice water.

Description of Work
He came to check the house to see if we needed extra protection to prevent squirrels and rodents from coming in. He came right away for a free estimate. He gave a pretty thorough overview of the house and decided we didn't need anything except trimming the trees back, which we could do ourselves. He was very professional and on top of everything else he offered me an ice water.

They told me that there were no rodent but that there were squirrels in there and maybe a raccoon. I ended up having to get someone else to come out and get rid of the wildlife.

Description of Work
Purchased a deal

I purchased this deal because the previous winter I had a raccoon take up residence in my house and deliver her babies in my crawl space. I also heard movement in the attic during the winter (raccoon? rats?) and I wanted to prevent it from happening again. The deal was $139 to have the house checked and to repair minor entry points. Mr. Galloway was professional and punctual. He checked my house for possible entry points for rodents but was unable to find any big enough for a raccoon to fit through. He did find one small place over the storage room and several damaged shingles on the roof. However, any work or repairs to the roof was not covered by the deal. So, for an additional $270 he applied new shingles to the few areas he found. A month later the roof rats moved in. In hindsight, I don't really feel I got my money's worth.

Description of Work
Checked my house for possible entry points for rodents. Replaced some damaged shingles

The provider called me as soon as I purchsed the deal so no complaints related to his responsiveness, however, he did have problems making his scheduled appointment. He called but since I work from home I was on a call and we had to do a bit of phone tag before we were able to make contact. Once he arrived I showed him areas where I felt I was having issues with rodent control. He did look at these areas and then patched the places that I showed him. He did not do an inspection of the attic area and although he looked in the basement he did not really do anything there (although I have had issues with pests in the basement and I explained that). Basically for the price he really didn't do very much--I thought it would be a much more extensive package. I would not use the services again.

Description of Work
I bought the rodent prevention package from an Angie's list deal.

1 - Angie's List add stated cost was for 4-hours service for 2 workers, a total of 8 hours labor. 2- When Mr. Galloway showed up and I asked him about the other person that was supposed to be there, I got the don't do this to me statement. He said he had nothing to do with the add - that the add was put out by Angie's List. Yes, I feel I got short changed on the labor and I'm not sure if I will ever purchase one of these adds again. 3 - Prior to work being done, I had to reiterate to him that I had already paid for labor through Angie's List and that I was only going to pay for materials purchased/used. 4 - Part of the process in removing and replacing bad siding pieces is also to remove the old caulk. Caulk from around the windows was also removed as this was attached to the bad siding. While reviewing what had been done, I asked why there were these huge gaps under both windows - there was no caulk He had no clue as to why that was so. You could see the strip of old caulk in the grass under the windows. He then proceeded to put some caulk under the windows, but not enough. Because he was already finished with the job, he did not paint this caulk. I had to make a trip to Lowe's to purchase more caulk to finished up what was not done properly. The huge gaps under the windows would allow rain/moisture and insects right into the window area and allow more damage to accumulate behind the siding. 5 - He left exposed nails and popped out nails. 6 - In another area, I asked if the caulk had enough time to cure before painting over it. He stated he didn't worry about those things. He left all that up to God. Okay - I'm a Christian too but it was getting to the point that he kept stating his Christianity so that I wouldn't post a bad review. 7 - After having had repairs such as this done about 4-5 times, this was the shoddiest job I've ever seen. It was very obvious that Mr. Galloway has no idea what proper construction/home repair work contains. 8 - At the most, he worked on this project for approximately 3 - 3.5 hours.

Andrew called me within a couple of hours of submitting my request via Angieslist. We set an appointment to meet and walk through. He was prompt for the appointment and ready to review my project needs. He offered detailed options on finishes and gave advice on why I would possibly not want to do something now if it was going to impact another project or not bring me the value I was looking for.

Description of Work
In relocating to the Memphis area I purchased an older midtown home and sought bids to redo a full bath in the hallway. Including expanding the shower, pull down plaster and dryway, replace vanity, vanity lights, mirror toilet. Paint 3 rooms and ceilings, add a door where there wasn't one, pull up carpet and refinish hardwoods in 2 rooms. Install a number of light fixtures/ceiling fans. In the end I did not go with Galloway not due to any thing with them but because my list of projects far exceeded my budget for now.

This turned out ok. I wasn't there when they came but they did a treatment. Scheduling, communication, and price was ok. I did another job with him later.

Description of Work
I purchased a big deal for $98 for spring preventive pest-control treatment.