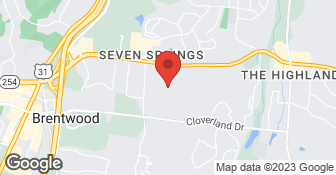 A-Pro Home Inspections is a family owned and operated business in Middle Tennessee that offers inspections for home buyers and sellers alike....

It was a case study in deceptive marketing, incompetence, and a total lack of integrity. Matt Hudson of A-Pro Home Inspections (franchise owned by Lex Hudson) conducted a pre-purchase home inspection for us on August 1, 2016. He missed a significant lot drainage issue that became apparent shortly after moving into the house. We had four highly rated (by the Better Business Bureau and Angie's List) remediation companies independently evaluate the problem. They all recommended the same remediation that costs approximately $10,000. They also said that the home inspector should have called out the problem if he was paying attention. In addition to pointing out several puddles of standing water in the crawlspace long after the most recent rain, they provided pictures of stains on the interior crawlspace walls showing evidence of prior water accumulation well above ground level. Matt claims he did not observe any standing water in the crawlspace at the time of his inspection which is disputable, but more importantly is a deflection from not calling out the stains as the remediation firms all said he should have and are a tell-tale sign of problems. When we asked Matt about this on several occasions, the silence has been deafening. We also pointed out to Matt that the A-Pro web-site touts a 500 point inspection with a checklist that includes sections devoted to both lot drainage and crawlspaces. Matt's report did not even mention anything (pass or fail) with respect to lot drainage and the crawlspace section had not mention of the stains (he did however report some drywall stains in the house as evidence of prior water damage but missed these stains in the crawlspace). The business card Matt provided us with our report also had his local franchise web site [*** Link removed ***] which also touts the A-Pro 500 point inspection. When asked why his report did not evaluate lot drainage or mention the crawl space water accumulation stains again the silence was deafening. It is bad enough to make a costly error, but it is unconscionable to not honor one's commitment to make it right and lie in the process. We asked Matt to honor the A-Pro guarantees to (1) "if we pass it, we protect it" and (2) "no further evaluations" required guarantee. After a much delayed response, he came back with an incredible claim that the guarantees were a corporate program that his franchise did not participate in. When I responded that that was never disclosed and more importantly the web site on the business card he provided me touts the guarantees and then even has a quote from the franchise owner, Lex Hudson, that states "In essence 'if we don't report it, we repair it" means you can have absolute confidence in your A-Pro Home Inspector Brentwood TN inspection report." It would cost us more in legal fees to compel the Hudson's of A-Pro to rectify their oversight and honor their guarantees. The only recourse we have now is to hope that the Lugars act with integrity and honor their promises. If they do not choose to do so, we hope they immediately discontinue their deceptive marketing practices backed by hollow promises and do not harm any other consumers. We have reported this incident to the Better Business Bureau and the Tennessee licensing/regulatory authority complete with (1) Matt's inspection report, (2) the A-Pro 500 point inspection list highlighting the lot drainage and crawlspace sections, (3) Photos of the water stains along with quotes from the highly rated (BBB and Angie's List) remediation firms, (4) the A-Pro guarantee language, and (5) screen shots from the Hudson's web site touting the 500 point inspection, the guarantees, and Lex Hudson's hollow promise "if we do not report it, we repair it."

Be very cautious when dealing with this business. We were on the receiving end of a very costly mistake on the part of this company. Even though the company made a false statement in their inspection report, one which ended up costing us thousands of dollars in unnecessary repairs, they refused to take responsibility and reimburse us for repair costs incurred due to their error. If you wish to deal with a business based on honesty and integrity, we recommend you look elsewhere.

I appreciate Mrs. [Member Name Removed]'s opinion but we were not hired by her nor did we perform any work for her as she was never our client.

Home installation and repair. We guarantee your satisfaction and we won’t leave until the job is done right. We pride ourselves on the quality work we provide, while delivering great customer service! Check out our services offered and call or click to schedule a free estimate today.  …

A-Pro Home Inspections is currently rated 1.5 overall out of 5.

No, A-Pro Home Inspections does not offer eco-friendly accreditations.

No, A-Pro Home Inspections does not offer a senior discount.