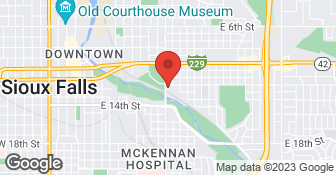 Comfort Heroes Plumbing, Heating & Air is committed to providing the highest level of customer service and customer satisfaction in our industry. We provide Fast, Professional plumbing, heating, cooling, insulation, and drain & sewer service to the greater Sioux Falls area at an affordable price, 24/7. WE GIVE UPFRONT PRICING ON EVERYTHING WE DO BEFORE WORK STARTS . NO HIDDEN FEES ! Our City and County licenses are listed below: South Dakota Plumbing Contractor: SXF-E0812-16-1945C; Sioux Falls Plumbing Contractor: 228; Sioux Falls Mechanical HVAC Contractor: 217. Some cities do not require a license please check with your local building department....

Alan was the one who came out very quickly after I called the office and requested a quote. He gave us some good options and we were able to work out a package that would get the job done and stay within my expectations. We had a Trane package put in since Trane was the product line we used to carry at The Home Depot (I am a 17 year vet there and now retired). We set up a date for the install and the installer was right on time only to find the furnace unit damaged in shipping. Good luck was with us as they checked with their distributor immediately and they had several more units just arrive that morning with one that was in perfect shape. So the install was on and done in one day and the next morning. They caught a couple issues with the old electrical install but corrected them without a hitch. There were a couple issues with the physical install caught by the city inspector but the guys were right back the next day to perform the fix. I'm not sure why they missed those issues but it was explained that there were new items in the code and in the end, they were not major items. The final cost was just as quoted before the job began without any type of surprises to run up the bill. The cost was more than we expected overall but the product is top quality. The cleanup was very good and we had good air conditioning that evening.

It went excellent. They were very late in arriving. The service man was professional and pleasant. The work went quickly and well. He mad sure everything was up to speed before he left.

Golden Rule was quick, efficient, friendly. clean, and was overall a real pleasure to work with. My wife and I couldn't be happier and we would highly recommend them. Ask for Alan, he's the best.

I am well satisfied with the service that Alan provided. I am also happy that they were able to come so fast and fix it for only $300. I was as tickled as a son of a gun.

Thank you Alan and Travis for fixing our plumbing

Description of Work
Plumbing and HVAC

Alan was EXCELLENT. He was very fast, professional and saved the day for my family. We had an emergency pipe burst and no one else could get us in today because they were “too busy” to come out “for a small leak”. Bottom line... the other companies in town are *** HOLES. One of the other companies in town was going to charge me $109 just to show up and said they still wouldn’t be able to fix it until Tuesday! Golden Rule came same day and fixed it within an hour for a very reasonable price. From now on I’m calling Golden Rule!! ALAN’S THE BOMB!!

Alan and James were polite and helpful. They worked very efficiently to fix my air conditioner which was leaking into my furnace when it was on. They showed up on time in professional looking trucks and were clean. I appreciate everything you did to help get my air conditioner up and running so quickly. I would highly recommend and will definitely use again. Brittany was also very friendly on the phone. If I could give six stars on my review I would! Thank you!

Description of Work
My air conditioner was leaking into my furnace when it ran. Wasn't sure if my water heater was leaking or not. ALan and james took care of it for me though!

The staff at Golden Rule is very friendly and knowledgeable, not only did they answer the phone on a Saturday but they sent a technician to my home in less than 1 hour. Very impressed with Golden Rule!!

Description of Work
We had a plumbing emergency I'm the middle of the night and Golden Rule was they only place we could get ahold of.

We had a plumbing emergency at night and Golden Rule was the only company that we could get a hold of, the problem was that they could not come out for an hour, it was am emergency and so we told them to forget it and we called the city and they came out to help us. an hour later the plumber showed up. We explained that we cancelled and didn't need them. The plumber refused to leave unless we paid him. He then threatened to put a lien on our home and contact the city and fine us for safety code violations. so we paid him to get him to leave, under extreme duress. We were so frantic about our basement water situation and we were taken aback by the rudeness of this plumber, looking back we should have called the police. after calls and reviews on line and a complaint with the BBB their only response was that they stand by their plumbers customer service and that we should be thankful for their great service because they gave us a discount. i do not care if we had to pay a $1 or $130. What that plumber did was unnecessary and against what their name stands for.

Hi [Member Name Removed], This doesn't sound anything like how we do business. I can see from the notes here that the bill was reduced by $60 and that Mr [Member Name Removed] said he thought it was was a fair compromise and thanked us. Because we have already discounted the invoice by $60 in our system we have this issue as resolved on our end which is why we are surprised to see you contacted the BBB and Angieslist. We will contact you by phone to discuss any other complaints you may have. Thank you!
2.0

Contractor said the water heater needed replacing and needed the addition of a water softener. They provided my wife a quote of $5,500 for the water heater and $1,000 for the softener. Anyone that knows anything about water heaters knows there is not a system in the world that should cost any more than $1,500 installed (this is high) for the average house. I have priced doing it myself. A high end water heater with a 9 or 12 yr. warranty is $540-$700. But never fear, they were also willing to provide high cost financing. Run from this contractor.

Description of Work
Our water heater pilot light has been going out on a daily basis. Contractor was asked to inspect and recommend a fix.

Mr [Member Name Removed], We've been doing this type of work for 10 years and what you're describing doesn't sound even remotely like how we do business. I can see from the notes that you were quoted five different options ranging from changing the existing water heater venting for as low as $246 all the way up to a high efficiency tankless water heater with a water filtration system for $6996. I've spoken with the technicians that were in your home and they informed me that you were not present and your wife did not want want a full list of recommendations left behind. It sounds like there may have been a bit of miscommunication there since she did not have everything we discussed on paper. Please call me at 605-202-2020 so we can discuss this further and clear up any confusion. Kind regards, Alan G., Owner

JP Contracting is a newly formed company with the principles in the business having over 20 years experience in the construction industry. We got tired of being the point of contact for our customers and keeping secrets we do everything open book. We specialize in new home construction, large and small remodels (I.e. kitchen, bath, home additions) We take care of everything from local permitting to material acquisition to completion. Keeping the client informed along the way.  …

With experience in nearly every aspect of residential building construction, remodel, and handyman services, our company can complete a wide array of tasks where others would need several different trades. Our attention to detail is second to none and we refer to ourselves as 'fast and fussy'. We also are able to address any punch list items you have from the sale of your home. From complete basement finishes to small deck repair jobs we want to be your go to guys!  …

We have the experience and dedication to bring your dreams to reality! Specializing in Remodeling Services, we guarantee your satisfaction, and we won’t leave until the job is done right. We pride ourselves on the quality work we provide, while delivering great customer service! Call or click to schedule a free estimate today!  …