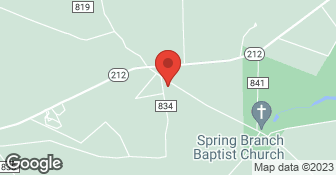 We are a Family owned and operated business. We offer services to our commercial and residential customers, and have several different options for financing and payment including standard Retail Financing, CCs, and also a no credit check Rent to Own. We are staffed to be able to handle the largest jobs and offer 24hr service....

I have been with these people for fourteen years. They have provided all my service needs for HVAC, and just yesterday for electrical. Without appearing to go "over the top", this company is mazing. The personnel are ALL competent, and each one is friendlier than the one before. They always show up on time, and always complete every job to my 100% satisfaction. Yesterday I had a problem with a 50amp breaker that was humming and getting very hot to the touch. I called them at 8:02. Before 11:00 I had Steven at my house fixing the problem. He replaced a defective breaker. While he was here, he fixed a three-way switch problem I had, because when I replaced the switch, I reversed two wires. This was done at no cost to me - ZERO - He explained that while he had to give the new breaker time (to see if it too was going to overheat), that he was happy to do it. This company replaced my heat pump and a second unit I have in the bonus room. Do yourself a favor the next time you need HVAC - or electrical service. You will find no one better than Carolina HVAC (and electrical). I feel blessed to have them service me. I'll proudly leave my name - Kenneth Finucan, Aiken SC.

Steve arrived right on time and solved my problem in 5 minutes. He then provided a personal seminar on 3 way switches and explained why my 50 year old house worked just fine without a $1,000 investment in the latest "arc fault" breaker system. In the event of a breaker issue in the future, the original design $10 breaker replacement will work fine. Steve gets my full recommendation. His boss advertises that the company will give Steve a tip - he certainly deserves it. Professional employees, like Steve, are hard to find. From years of calling on Carolina HVAC, I am impressed by the type of professionals employed. Phll

Description of Work
A security light system is controlled by two 3 way switches. One switch operated properly at times and then the other switch took over. After hours of research and several trips to Home Depot, on my part, I relented and called Carolina HVAC to get an expert involved.

The work looks and works great. Very professional and friendly. This is the second time I have used them for two different houses and each time they worked around my schedule and gave me the best price in town.

For the third time in four years, we contacted Carolina HVAC to re-charge the refrigerant in this one unit. Unfortunately, the refrigerant we need is no longer available, by law. After evaluating our existing system, including the air handler in the house and the ducting, Pat Quill (the owner) proposed several options, including replacing the unit. After discussion, that was our choice: going from a now-15-year-old 9 SEER (seasonal energy efficiency rating) system to a 2-ton 15 SEER heat pump. However, due to the change in refrigerant, we also would need to replace some of the piping/ducting from the old system. Pat discussed mutually convenient installation dates, and we decided to start the work a week and a half later. He and his team showed up very promptly at 9 a.m. on April 30. We had expected Pat plus a 2-person team, but got Pat plus 3. He said that the extra person was available that day and it would help move the work along faster. It did: the work was forecast to require two days, but actually was completed in just one day. As they began installation of the new unit, they realized that its footprint was larger than that of the old unit, and wouldn't fit completely on the existing concrete pad. They stopped work, told us of the issue, and didn't resume until we had come to agreement on a safe, effective way to deal with this. And when the old ducting had to be removed and new ducting installed, rather than break through walls and ceilings, they installed a channel running along the ceiling and exterior wall. The interior channel matched the ceiling color so closely that it almost is not noticeable. Throughout the work, they kept tidying up after themselves. By late afternoon, there was little remaining to clean up. And the old unit and attached parts were completely hauled away. Just as a test, we set the new thermostat for 10 degrees lower than the ambient temperature. I was quite surprised when the house temperature dropped 7 degrees in less than 45 minutes, something that we'd given up hoping for from the old unit. The following morning, the only thing remaining was a final walkthrough and payment.

Description of Work
Carolina HVAC replaced the entire HVAC unit that services the first and basement floors of the house.

They were very professional, punctual, and responsive. It took a few days to get the replacement from the supplier (this was not their fault, just a hard item to get a hold of) and they keep me updated on the progress. They came out when it was convenient to me, showed up exactly when they said, and completed the job quickly. If you want quality work with great customer service go with Carolina HVAC.

With over 20 years of experience in the heating and air conditioning field we are here to help our communities in the CSRA.  …

B & E is a locally owned and operated Heating and Air company.  …

We here at A & H Electric Company, LLC, take pride in our work, and always pay attention to the minor details. Our customers know they can rely on us no matter what the project may be. We always go the extra mile to ensure the job gets done correctly the first time around. Our knowledge and experience is unmatched in our field. Call us today for your next electrical project!  …

Carolina HVAC LLC is currently rated 5 overall out of 5.

No, Carolina HVAC LLC does not offer free project estimates.

No, Carolina HVAC LLC does not offer eco-friendly accreditations.

No, Carolina HVAC LLC does not offer a senior discount.

No, Carolina HVAC LLC does not offer warranties.