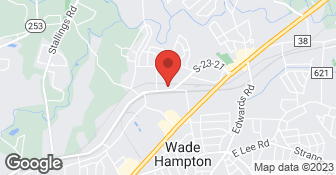 The professionals at Andy OnCall make home maintenance a cinch! Since 2001, we have proudly provided the Greenville area with a variety of handyman services, including deck repair, remodeling services, gutter cleaning, and more. You can count on us to provide you with long-lasting results that look great!...

HMC Builders is a general contractor specializing in all things gutter! We offer seamless gutter installation, gutter and downspout repairs, and gutter guards. We also service and clean all residential and commercial gutters. We strive to provide excellent customer service and quality craftsmanship.  …

Southern Star Roofing is a locally owned ROOFING company with many years of industry experience. As our main office is in Charlotte, NC, we can conveniently serve customers in and around the Charlotte area. Southern Star Roofing specializes in residential full roof replacement and gutter systems. We have 2 new offices in Asheville, NC and Greenville, SC. We have an excellent reputation working closely with North Carolina & South Carolina insurance companies regarding homeowner insurance claims. Southern Star has an A+ accreditation with the Better Business Bureau, over 150 5-star Google reviews and is an Angie’s List Super Service Award recipient. Southern Star has built a solid reputation in the areas of workmanship, professionalism, dependability, and competitive pricing. Southern Star offers a full manufactures warranty on materials, and a workmanship warranty on each job. Southern Star offers free roof inspections and estimates for homeowners. Every installer hired by Southern Star is very well experienced, well trained, and truly the best in their field. The sales force and project managers at Southern Star are very knowledgeable and offer the highest level of customer service. Southern Star is fully insured in the areas of Workers Compensation and General Liability. Please check out our website at SouthernStarRoofing.com or email us at info@SouthernStarRoofing.com.  …

we offer pressure washing services. House cleaning with our unique soft washing system, Driveways with our high quality surface cleaner, we soft wash Roof's so it will never damage it but add years of life to it, Decks, wood & Vinyl fences. we offer Gutter Cleaning. If you want your house cleaned call BEENE!  …

I used them all the time. The woman that answer the phone and takes a serious job. She so refreshing. As long as they have Joy, I'll keep calling.

They performed the tasks we asked of them very efficiently. We wanted to turn a small bedroom into a dance studio. We had mirrors that we wanted mounted on several walls and framed out. The work they did was very satisfactory.

Description of Work
Painting and mounting of mirrors.

I had a leak in an upstairs bathroom that damaged the floor and cabinet in a bathroom and the drywell on the ceiling below. Andy on Call was recommended by the realtor as I was in the process of selling the property. I was out of town and conducted all business with them by email and phone. Service was excellent! They gave me a detailed estimate which included all the materials and cabinet needed for the job. They arrived promptly and expeditiously completed the work. I will use them again in a heartbeat.

We were preparing to sell our house and needed several minor repairs done before putting house on the market. We contacted Andy On Call to get estimate on various services. The lady I spoke with scheduled a time for someone to come out. The day they were supposed to come I waited all day and they never showed up and never called us back.

Description of Work
No services were provided because they never called us back.

Took them forever to show up and even longer for a written estimate. Called and reschedule twice, and after work was completed, tried to charge me extra for materials. Said the invoice was for labor ONLY, even though written estimate states labor AND materials.

It's been over 2 weeks now, and they never have called us back. We had someone else do the work.

Description of Work
Called them for some minor interior carpentry work. They took our number and said they would call us right back.

I left a message on Saturday and they called me Monday morning and had a tech there on Monday afternoon! The tech fixed the problem and was done in short order! Awesome

He was on time. He has good work ethics and good price.

Description of Work
I used Andy on Call to do heating and air conditioning.

Decided to try 'Andy' because of the Valpak flyer. Phoned the number on the coupon, spoke to a woman and explained what was needed (including the height involved) and she said she would arrange for someone to come and take a look and give me a quote. The contractor would call me to make an appointment. One week later I called again to say I hadn't heard from anyone. 2 days later I got a call, made an appointment, and the contractor came round. He was very pleasant but told me that work on a high roof was not something he would do, but he said he would pass my need back to head office and they would contact me with the name of someone who likely could help. Never heard anything from them, so I found someone else to do the work.

Description of Work
(Not sure if I dealt with this Andy or the one on Wade Hampton. Repeating my review for that one, because Angie's List keeps asking me to supply a review here!) Cleaning and tightening gutters and downspouts. 2 storeys at front of house, 3 at back (we have a basement.)

I have used this company one time before, and they were great, so I decided to use them again for some services around my house, I called them on the 29th of March I spoke with a rep and told her I needed an estimate, she wanted to know when I needed someone out I told her before Thursday of the following week, she told me that they would give me a call back, they didn't return my call so I called back on the next Tuesday evening and left a message explaining who I was and that I had called the friday before and asked how come no one had returned my call. Wensday evening I received a phone call from this company they left a message saying someone would be out on Thursday, I called and told them that it wouldn't work because from the orginal call I explained that I needed someone out before or no later than Wensday due to my work schedule and I wouldn't be off until that following Monday, needless to say on one has done a follow up call back and I am very disappointed

Description of Work
Needed an estimate for services around my house.