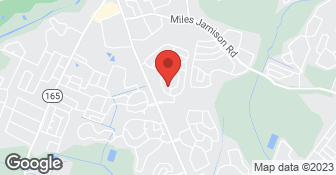 I am a small local business owner with more than 20 years experience. I take great pride in the work that I do and with the relationships that I have built with my customers. The majority of my business comes from repeat customers along with referrals. I am able to offer an extremely broad range of experience and services to my clients, and am always happy to assist with sub-contracting

He is a professional and very experienced.. Prompt, easy to work with and friendly.g Will use him again.

Description of Work
stripped wall paper off half bath walls and painted.

Description of Work
Clint came to our home to see what exactly we needed done. In our case kitchen cabinets needed to be sanded/painted. He provided an estimate while there and was also going to consult with someone else. That is the last we heard from him. Despite multiple phone calls to him and leaving messages we have never heard from him again. Okay if he did not want to do the job, just should have said so.

did an awesome job; was considerably less expensive than other 2 estimates; very professional job. Would recommend to anyone.

Description of Work
painted the exterior siding and trim on the house.

Clint was on time, he made sure that everything was cover and did a very good job.

I have had an excellent experience with them. They just finished the job for me. In fact I have not even paid them yet, they are sending me the bill now. I have already seen the job and he did a very good job on it. He is very good. He has done several works for me before on some of my rental properties and he has also done some work in my own house and I am very happy with what he has done for me.

Description of Work
I had Clint's Painting do some work on the roof and I had some skylights taken out and they were reattached inside of one of the sheet rocks and they redid the whole ceiling on the sheet rock in the family room. They did a very good job.

When I went to check their progress painting I became upset. I have vinyl window frames and his worker got paint on them. The columns on the front porch were not smoothed down and they looked a mess. The son was painting over chipped paint and didn't prep the window The worker asked me how I liked it so far and I told him I thought it would look professional. If I knew it would be like this I would have gotten my grandson to help me paint. I walked around the house and the son who looks like he is in high school was painting the unprepared window and I asked him if he was home school? He said he was almost twenty. I said oh and kept on walking. I went around front and the helper yelled at me,and quot; that he didn't like the way I talked to him.and quot; He told meand quot; to go get my nephew and do the work yourself and when you are done I will come over and inspect your work.and quot; and quot; He also said he had thirty years experience and you don't critiize a job until done.and quot; He told me he didn't have to put up with me. He then called the son and they left. Mr Clinton called me about an hour or two later and said he did not like the way I spoke to his help. Then he was quiet. I waited for him to speak again. He said that I had no business asking his son if he was home schooled. That it was uncalled for. Mr. Clinton went on from there. I explained my self about his son looking so young and if he was insulted by a compliment then I apologies I told Mr, Clinton that his men walked off the job and it was fine with me. I thanked him for calling and hung up. He immediately phone back and I not wanting another confrontation did not answer the phone. He left a message saying he understood why his men walked off the job if I spoke to them the way I spoke to him. He claimed his work man knocked on the door to apologies and no one answered the door. I have two very loud and barking dogs that bark at the slightest sound. No one knocked. . Now I have been around a long time. My house, my money, and I want a good job. To late to rectify a bad job after it is done. Mr Clinton if he was a good businessman should have came over to see what had gone on. But he wanted me to apologies for being a concerned person about a lousy job. He also shouldn't have insulted me by expecting me to apologies. I was not rude to anyone Mr. Clinton or his workman. I was asked how I like the job so far and I told him. He didn't like it.

Description of Work
He showed up my door without calling. He sent a helper and his son to do the job,

He did a great job. He's going to paint the inside of my home soon so I'll be calling back to give a review on that.

Description of Work
He repaired the screen on my back porch.

Description of Work
He has done major painting jobs inside our house, prepped for wallpaper, put up fixtures, pressure washed outside and hung shutters, put up crown molding, etc.

I could never in my good conscience recommend them again. I am not absolutely sure about the price. I would not use them again. They painted my bathroom the wrong color. They did come back and repaint it. They missed a lot of places with the painting. Some of it looked fine. Some of it looked like it needed another coat or a thicker first coat because you could see what was under it peeking through. They were supposed to paint all the trim and the doors. It does look like they painted the trim, but I don't think they painted the doors.

Description of Work
Clint's Painting did interior painting for us probably about 3 years ago which was a year after we moved in here. They painted all the rooms.

He was good and I think I got him from Angie's List. There was a man with him then Clint came back and did some extra things to make it prettier. It's a little pricey but if you want it you pay for it. I supplied the supplies and paint, but he supplied the primer, ceiling paint, patch and all that.

Description of Work
Clint's Painting scrapped al the wall paper off, sanded, prepped, primed and painted it. They also had to relocate a light fixture from the ceiling to the wall and the patched the ceiling. He took down all the bathroom fixtures and filled in all the walls and put up new ones in different places including a curved shower rod and up to date fixtures. He also painted my mirror trim.

It took one day. They did a good job. They did do me a favor of sanding down a wall and priming it for me even though it was not the room they were working in. I thought they went above and beyond.

Description of Work
They painted a bathroom and office. This included walls, ceiling, and trim.

Clinton, the owner, is courteous and detail oriented. I have used his services twice and am very pleased. He is the third painter I have used in this area and the only one I would recommend. He and his workers are on time and friendly. He also sticks to the quoted price, and I feel has good prices.

The Gutter Gorilla, strives to give top end customer service at a middle end price, treating each of our customers kindly, professionally, and with the best materials and products available from the first phone call to the final walk through when the work is completed. Ask us why, why we install what we do, why we install the way we do! Call today! The Gutter Gorilla offers seamless gutters, leaf guards, Impact and non-impact Replacement Windows to Charleston tri-county and along the coast extending to our location in Myrtle/North Myrtle Beach. We are the Coastal South Carolina gutter company.  …

Kitchen Tune-Up is Charleston's leading cabinet refacing company. We breathe new life into kitchens all over the low country by removing all the old doors and trim, refinishing the cabinet boxes and installing new doors and drawer fronts. This service is usually at half the cost of new cabinets of the same quality. We are the only company that provides In-Tune Customer Service. It's customer service that's in tune with you. It's the fresh new look you want without the hassles you may have experienced in the past. Kitchen Tune-Up of Charleston specializes in cabinet refacing, new kitchen cabinets, cabinet door replacement, drawer boxes and organizers and custom closet organizations. Kitchen Tune Up of Charleston has been the Super Service award winner for Cabinet refacing for the past 4 years, we are very proud of our small family owned business and look forward to making your kitchen a space you love! Kitchen Tune-Up in Charleston is locally owned and operated  …

Owner operated. Uses subs for labor. Cost is determined by the job. No travel charges. No service charges. Extra charge for after hours service. May contact through email.  …

Bonded
Insured
All statements concerning insurance, licenses, and bonds are informational only, and are self-reported. Since insurance, licenses and bonds can expire and can be cancelled, homeowners should always check such information for themselves.To find more licensing information for your state, visit our Find Licensing Requirements page.
General Information
Free Estimates
Ask for Details
Eco-Friendly Accreditations
No
Payment Options
Check
Senior Discount
No
Warranties
Yes

Interior and exterior home repairs,painting, and remodeling. My team has the experience and capabilities to handle everything from minor sheet-rock repairs after a re-pipe to a complete home renovation, with an interior designer.

How is Clint's Painting overall rated?

Clint's Painting is currently rated 4.5 overall out of 5.

No, Clint's Painting does not offer eco-friendly accreditations.

No, Clint's Painting does not offer a senior discount.

Are warranties offered by Clint's Painting?

What services does Clint's Painting offer?

Clint's Painting offers the following services: Interior and exterior home repairs,painting, and remodeling. My team has the experience and capabilities to handle everything from minor sheet-rock repairs after a re-pipe to a complete home renovation, with an interior designer.