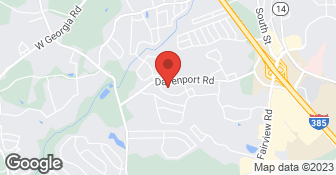 Let's see - called first thing on a Monday morning to schedule service. Was told that someone would be out Thursday or Friday. Ok great. Called again Friday morning after hearing nothing Thursday or early Friday and was told someone would definitely be out that afternoon. No one showed, no one called, no one made any attempt to let us know they would not make it after we made arrangements to have someone here. So the following Monday comes, and again - no contact from them whatsoever. So we made other arrangements. I see several good reviews here but I have to be honest - it doesn't take long (no matter how busy or crazy things get) to make a call to re-schedule or make other arrangements on another day for the repair. If you can't do that, then I really have to question how good of a job you would do anyways. We wanted to use local but I guess we are headed back to Sears. They at least show when they say they will, or call.

It went great. He is honest and very capable. His price was fantastic and he really knows his stuff.

Description of Work
Cecil came to our house in October in order to assess problems with the in-the-door ice maker in our Kenmore French door refrigerator. He told me he needed to order a part and that it could take time because the Kenmore was made by LG and the parts come from South Korea. He didn't charge me for the first visit and told us if we authorized him to order the part it would cost us $159. It took almost two months for the part to come in and Cecil repaired the refrigerator today. He only charged us $134 because he didn't need to replace the electronic board. He's a very honest man and I thought his prices were incredibly reasonable. I would definitely use his services again.

Skilled and experienced technician. Works fast and is accurate.

The door seals were obviously deteriorated. On the recommendation of another larger repair firm, I called; he came out, ordered replacement seals from the regional parts warehouse for the Scandinavian manufacturer, and we waited for 6 or 8 weeks. He may have tried to expedite the order, I don't know. He is bad about not returning phone calls. He makes appointments and doesn't show up or bother to even call. He knew what he was doing in the actual repair, which was simple. We picked him because he is one of the few who deals with the particular brand (Sub-Zero).

We set a date for the repair. No show, No call, No return text.

Description of Work
Was suppose to repair LG icemaker.

Description of Work
The repairman showed up on time. The repair was not extensive at all, so he fixed it quickly and only charged a service call since it did not take much time to repair. He was honest and did only the work that needed to be done. He was quick, professional, and now our refrigerator works great! No more problems!

You may have to call Mr. Byrd more than once but he'll get the job done and do it right. I will definitely use Mr. Byrd again!

Description of Work
My dryer timer knob went dead on Sunday. On my dryer, this means no time, no heat, no dry clothes! My regular repairman informed me that he had retired and recommended Mr. Byrd. Mr. Byrd came, found the problem with the dryer and fixed it with a minimum of fuss.

He does a bang up job, and he is inexpensive. He did a great job. He carries a lot of parts in his truck. He has the equipment that he needs. He was able to get the job done. He is very friendly.

Description of Work
He has worked on refrigerators, washers, dryers, and any other major appliances in the house.

Honest and Dependable HVAC services offered in the upstate since 1989. Our reputation is built on our dedication to keeping the customer in service 24 hours a day, every day of the year. You can also check our record with the Better Business Bureau.  …

Johnson Brothers Plumbing, LLC is a locally owned and operated residential plumbing service company. As a company we care about our brand, our employees and ultimately our customers and their homes. At Johnson Brothers Plumbing, LLC we believe in taking care of our community with honest, quality and responsive work. We pride ourselves with even the smallest details of quality work and promise that we will always go the extra mile in exceeding our customers expectations.  …

All statements concerning insurance, licenses, and bonds are informational only, and are self-reported. Since insurance, licenses and bonds can expire and can be cancelled, homeowners should always check such information for themselves.To find more licensing information for your state, visit our Find Licensing Requirements page.
General Information
Free Estimates
Ask for Details
Eco-Friendly Accreditations
No
Payment Options
Check
Senior Discount
No
Warranties
Yes

no electrical or plumbing repairs nor do I repair small appliances such as mixers, blenders or can openers

Byrds Appliance Service is currently rated 4.7 overall out of 5.

No, Byrds Appliance Service does not offer eco-friendly accreditations.

No, Byrds Appliance Service does not offer a senior discount.

Are there any services Byrds Appliance Service does not offer?

no electrical or plumbing repairs nor do I repair small appliances such as mixers, blenders or can openers