HMC Builders is a general contractor specializing in all things gutter! We offer seamless gutter installation, gutter and downspout repairs, and gutter guards. We also service and clean all residential and commercial gutters. We strive to provide excellent customer service and quality craftsmanship. 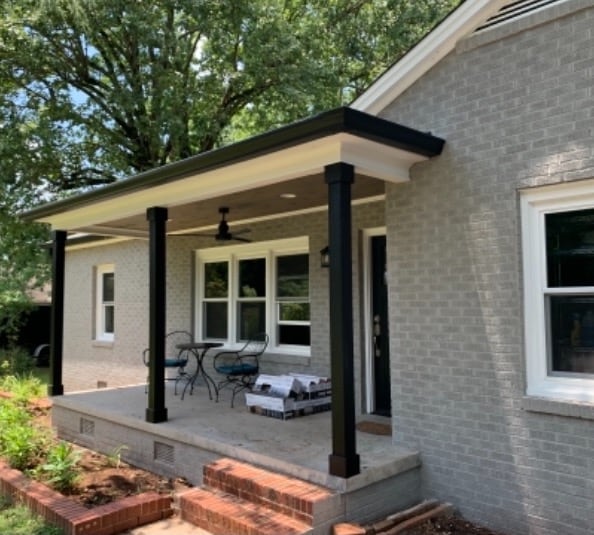 Half Round Copper Gutter

I would absolutely hire them again. Superior customer service and knowledgeable technician. We had a "trouble spot" on our roof that we have tried to fix for years. Just could not get water runoff routed correctly so we had cascading waterfalls every time it rained. The technician took his time to evaluate the issue and figured out how to fix it. Great job. No more waterfalls!!

Thank you so much for your review. It makes our day to hear that we have pleased our clients!
5.0

You know you’re an adult when you get excited about new gutters. They’re beautiful. The installers were professional. The process was painless. They actually answer their phone. I’d definitely use these guys again.

Thank you for your kind words!
5.0

Timely response from the office and the guys came out and did a great job! Professional attitudes and quality work! Definitely recommend and would hire again!

HMC is very prompt and thorough. The job was done well and repairs that were needed were found and fixed with no hassle. I highly recommend this crew for all of your gutter needs.

Thanks! We look forward to working with you and your referrals in the future!
5.0

The HMC crew did a great job upgrading out house from pine siding to fiber cement. Jones talked me through which manufacturer they used and why. The crew was very communitive about their plans for the work days and stopping to ask for clarification along the way when questions came up. We had a rot issue identified and they worked with us to ensure the rot was removed and repaired. Lauren in the office was a great point of contact and would keep me in the loop of schedule, plans, and payments. They use Leslie's Quality Painting to contract the painting. Leslie offered great advice on helping me select my final colors and then the dad and son that did the painting we're excellent. They caught a couple things needing clean up from the siding crew for me that we were able to notify them of and quickly address. The job went great and I get compliments all the time about how good the siding looks.

Thank you. It was a pleasure working with you!
5.0

HMC has/had a busy schedule so it took a bit longer than I would have liked but the end result is terrific. Great work - very pleased!

Thank you! We appreciate your review.
5.0

Very well. George was efficient, timely and professional. We had a small issue and he returned immediately to address it. Did what they said they would do when they said they would do it! Friendly, explained things, offered suggestions and options. Would definitely recommend. Wish company offered additional services in our area but sadly, only gutter repair is available in our area.

Thank you so much! We enjoyed working with you guys to complete the project.
5.0

Very well for both jobs. Would hire them again.

Description of Work
Addition to residence. Repair of foundation wall.

We have been happy with their work in the past. Prompt response to our request for inspection and estimate. On time to make repairs.

Description of Work
Repaired problem with skylight to prevent leak. Also, re-taped and added support in attic for solar tube. Both skylight and solar tube had been installed by someone else about 10 years ago. No rain since work was done but HMC has done good repairs for us in the past.

Thanks [Member Name Removed]! We're happy to help you guys out.
5.0

I am very pleased with HMC. They advised me on the latest innovations in gutter guards, and then quoted me a fair price. Installation was quick and professional. I highly recommend them.

Thanks [Member Name Removed], we were happy to be able to complete a project for you.
5.0

Very good work, would not hesitate to hire again.

Description of Work
Repaired soffit and end cap on roof and replaced gutters and downspouts.

Thanks [Member Name Removed]! We enjoyed working with you!
5.0

Great! They came out and ran new gutter to replace a leaking one. Very satisfied with their work. I would hire them again.

Thanks [Member Name Removed]. Let us know if we can do anything for you in the future!
5.0

From the quality of the work performed to the professionalism and courtesy of the staff, everything that HMC has done for us is outstanding. We are very satisfied clients and recommend HMC for any renovation need one might have. In one of the jobs, the team discovered that some materials were defective and made multiple trips back to the supplier to ensure the job was completed timely and to our satisfaction. We know that each job is performed by qualified experts who treat our home like it is their own.

Description of Work
Several jobs on our former and current home

The crew showed up at the appropriate scheduled time and installed my new system in a day. They were polite and professional. The work was A+ and looks great. The new gutter system works great And having no more water issues around the house. I am scheduling them to put new aluminum hand rails on my new deck.

Description of Work
I needed my my rain gutters redone. As there was massive amounts of water pouring in my yard. I contacted Jones about coming to look at them and give me a quote. He showed up and went over what he thought was my issue my gutters were a 5" and was not allowing the proper drainage. He explained the 6 " system he used and the Leaf Relief gutter guard system to keep the trash and debris out. Which was another issues I had due to large numbers of trees in my yard.

It went great not only do I not have wood hand rails that rot anymore. I have a new aluminum handrail system that is beautiful and looks sharp. Not only good looking it's safe and I don't have to worry about my nieces and nephews falling down the hill anymore. The new rails have a cool features I got controllable led lights that I can change colors of my deck according to the season. Can't wait to start using the deck this fall. As always the crew was professional And the work was top notch and a fair price. Can't wait to get the next project started

Description of Work
Needed new handrails on my deck that were rotting away.

There is too much work to list it all but here is some of what Jones has completed over the past two months... Repair 7 roof leaks. Install roof flashing Install new dryer vent through subfloor and crawlspace, install new bathroom vent out of the soffit instead of into the attic space. Run new plumbing to new laundry location. Hang and finish new drywall throughout the house. Blow in insulation in attic Expand and reframe 2 closet doors Patch hardwood floors throughout the house. Demo, expand, reframe the opening between kitchen and living room. Install bathroom fixtures Refinish hardwood floors. Jones keeps his word. His employees are professional and courteous and they clean up after themselves. The subfloor that was revealed when I pulled up the vinyl flooring in the bathroom looked bad and smelled like mildew. I called Jones in a panic, asking if we needed to replace it, too. He came right over, kindly chuckled, and said"No. Just spray it with bleach and put down self-leveler before you lay the new vinyl flooring." He is an honest man. He could have charged me for a new subfloor and I would have paid for it. Oh, and the mildew smell was gone within a day after the bleach application. There were several other times when I gave him an opening and every time he talked me down gently.

Description of Work
My husband and I bought our first home and the inspection did not give us an indication of the true state of the home. We got ourselves in over our heads with demo and realized we needed help. I met with two contractors, and neither one followed up to give me a quote or start work. My electrician told me to call Jones. I did and he showed up thirty minutes later. He walked through the house with me and gave me a quick rundown of what work needed to be done. The next day he met with me and my husband and spent an hour with us at the house, discussing what work we wanted done and making recommendations. He knew we only had so much money to spend on the reno and showed us what we could do ourselves to save on cost, and what would be a good idea to have his crew complete. Forty-eight hours later, he emailed a bid with a line by line breakdown of all the items with their cost.

Offer is valid for existing location only. 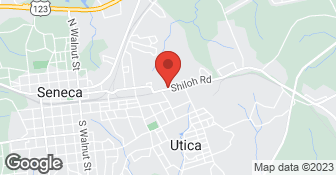 HMC Builders Inc is currently rated 5 overall out of 5.

No, HMC Builders Inc does not offer a senior discount.

HMC Builders Inc offers the following services: Install/ Repair seamless 5’’ and 6’’ gutters in K and half round For commercial locations: Install 7’’ steel gutters on metal buildings Clean out gutters prior to repair or gutter guard installation Use heavy duty, screwed-in gutter hangers Thoroughly seal and pitch the gutters for drainage, working with you to discuss downspout locations and determine the best look and function Repair rotten fascia and soffit