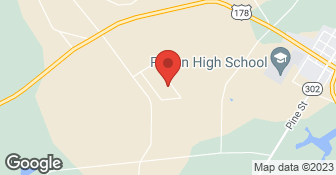 We have been a local company in business since 2003. We have 4 carpenters on staff. We accept all major credit cards and offer cash discounts. We offer free estimates and cash payment for referrals. We want your business.

Gabe Baker showed up and was very professional, I explained what I wanted, he let me know what the possibilities were as far as lumber decking or brick. He told me he would get back to me in a couple days with a quote including materials and labor. The next day he gave me a quote of $1100 for material and said he would do the labor for $350 for the lumber and $600 for the brick. I told him I would see if I could come up with the $1450 for the lumber deck. He told me that he would contact me again Monday and see if he could come up with a better deal, knowing I am a single mom with 5 children. Monday came and I received several text from Gabe as seen below from the pictures of my messages on my phone. He flat out told me that he would charge me for materials and would take off the $350 for labor if I would spend an hour with him. Being a lady I thought there is no way he is asking what I think he is asking, he seemed very professional so I asked, what do you mean spend an hour with you? Do you mean going over the plans for the deck, I can do that? He replied saying when and where. I said, you pick I have an appointment tomorrow at 9:30 but I am free after that. He said your place good? I said, sure that way I can visualize what ever plans you might come up with better. He said will your kids be home? This of course struck me as a little odd but again I thought, he probably wants to keep things professional and make sure we are not alone which is exactly the kind of woman I am so I replied and said, yep they will be home. To which he replied, I don't think we are on the same page. confused I said, I'm very blunt for a woman so why don't you just spell it out for me. And then it hit me like a ton of bricks. I am not unintelligent but I sometimes see more good in people than there really is obviously and give too much benefit of the doubt. So I said, Do you mean meet you for ***? To which he began apologizing for his asking and admitting that he was out of line and then said, just go with the original price I gave you plus the $350 labor, but if you refer me to someone else I will give you $500 off the price. I was so upset and angry at this point that I didn't reply at all. He texted and asked, do you still want me to do the job? I replied No thank you. Its all in the text conversation below. I wanted to let people know about this because there is just absolutely no excuse for this kind of belittling garbage and its not okay to get away with it at all. A couple hours later I had to ask becasue it had insulted me so badly, and no real man would degrade a woman to this extent so I had to ask a pig such as he to attempt to find understanding. Why was I in your mind classified as the kind of woman you solicate for prostitution, because you flat out offered me money in exchange for *** with that request, rather than being seen as the kind of woman you respect and take home to meet your mom? he replied that he was attracted to me and his "cave man" instincts kicked in. Seriously?? My 18 year old son asked me.. what should he have done instead if he really liked you? To which I told him, as a professional you stay focused on your job rather than your desires so it should have just been a note of attraction in his mind and nothing else said but if he really was attracted to me and wanted anything more than just a one night stand, he should have given me a fair quote, done the job and did it well, then when the job was complete and the transaction was finished, he could have simply said, I was wondering if there if by any chance you would be interrested in going out to dinner with me so I can get to know you a little better? That way I had the chance to let him know if I am available or interested in him as well and we could have gone from there or I would have told him I am flattered but I am really not interrested but thank you. To which he could have simply said I completely understand I just didnt want to regret not asking later incase you were, I wish you the best and we both go about our business. My son agreed that would have been a much more professional and gentlmanly way to approach the situation. No matter what, this is the most disgusting degrading way to approach a woman and it is beyond sexual harrassment. This man now knows where I live, he violated my place of solitude and degraded my character as a strong independant woman who has worked my whole life to provide for my children and it should not be tolerated. Now you are informed of ust the kind of man who is offering to do "quality work" for you. Husbands be warned of leaving him alone with your wives to do work, and woman be warned of the kind of man you may intend to be hiring for work. Be safe.

Description of Work
I called to get a quote on a deck for my back yard. Simple one level Deck as well as a playhouse for my daughter.

Remodeling and renovating. New construction. We do a wide array of jobs, efficiently and professionally.

How is Tru Renovations overall rated?

Tru Renovations is currently rated 1 overall out of 5.

What days are Tru Renovations open?

No, Tru Renovations does not offer a senior discount.

Are warranties offered by Tru Renovations?

No, Tru Renovations does not offer warranties.

What services does Tru Renovations offer?

Tru Renovations offers the following services: Remodeling and renovating. New construction. We do a wide array of jobs, efficiently and professionally.