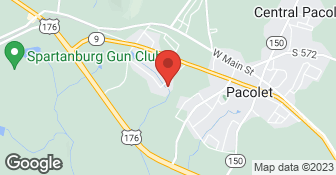 Description of Work
Got quotes on 2 projects that had to be put on hold. Good quotes in a timely professional manner. Hope to be able to use this contractor in the future to perform these projects.

Did not have work done. Price was higer than expected.

Description of Work
Did not have work done. Price was higher than expected.

My overall experience with Buice Home Improvements was great. I found them on Angie's list after asking five other contractors to come out and give me estimates. Buice had the most reasonable price and was the only contractor that had all of the licensing and permits neccessary to do the work. I was working on closing on the house when he came in to do the estimate and he was very familiar with the process that I had to go through to submit the proper paperwork to my underwriter for an FHA loan and was extremly patient with what had to be done. The estimate had to be re-written four times to get the correct verbiage to be approved by the underwriter and Mr. Buice was very diligent and promp with each one. Jerry completed the job very shortly after I moved into the house and completed the work for the exact price in the estimate. When I decided on a shingle color and brand for the replacement of the roof, he came back out as soon as the weather was clear. I am definitely one to do my due diligence, but when it came to replacing the roof, I felt good enough about working with Jerry that his was the only estimate I considered. The only complaint I have with the entire project was the clean up of the roof replacement. There were a significant amount of granules left on the porch from the roofing job that did not get swept up. Aside from that I was very pleased with the company and would reccomend them to anyone

Description of Work
Mr. Buice came out and gave me an estimate for the repair of some rotted exterior trim, the replacement of a couple of exterior doors and staining the front porch. Before he was scheduled to come out, I discovered a leak in my roof that was coming through the master bedroom. Jerry ended up sealing a couple of nail pops in the roof to temporarily fix the problem before we decided it would be best to replace the entire roof. Jerry also placed some carriage bolts at the end of my garage door track free of charge when he realized there was nothing there to keep the garage door from crashing down if pushed back too hard.

I contacted Mr. Buice after he was recommended by a friend. He gave me a written estimate to complete the repairs I had listed. He gave me an estimate of $4200 and said the price might be smaller than the estimate depending on the actual condition behind viewable areas for some of the work. A starting date was agreed upon. We felt confident enough in him (based on trusted friend's vouching for his character) to give him a key and access to the house when no one was home. The work was done well and in a timely manner. We added a couple of items after the initial work was completed. These were aerating and re-seeding the lawn.

After liking the job done by Mr. Buice on another property, I asked him to give an estimate on some work needed on an apartment. His estimate was reasonable and he did a good job and finished when he said he would.

We have the experience and dedication to get the job done right! Specializing in pressure washing, gutter cleaning, window cleaning, & concrete cleaning services; We guarantee your satisfaction, and we won't leave until the job is done right. We pride ourselves on the quality work we provide, while delivering great customer service! Call or click for your FREE estimate today!  …

**At this time, we are fully operational during this Coronavirus/COVID-19 pandemic to help with all your electrical needs! All of our techs arrive at your home with surgical gloves and masks on, we fully disinfect and sanitize our work tools and vehicles. When we are working in your home, every surface that we come in contact with is fully disinfected & sanitized with proper solutions. Please don't hesitate to give us a call during this time!** Family owned & operated Greer based Electrical company servicing Greenville/Spartanburg area since 1942. We can handle all of your electrical needs. Residential, Commercial, Troubleshooting and repair, house upgrades, panel changes, wiring, lighting, ceiling fans, generator hookups, and security lighting. Call us today for service.  …

Bonded
Insured
All statements concerning insurance, licenses, and bonds are informational only, and are self-reported. Since insurance, licenses and bonds can expire and can be cancelled, homeowners should always check such information for themselves.To find more licensing information for your state, visit our Find Licensing Requirements page.
General Information
Free Estimates
No
Eco-Friendly Accreditations
No
Payment Options
Check
Senior Discount
10%
Warranties
No

not sure, call me and ask we may try your project, we learn quickly

Buice Home Improvements LLC is currently rated 4.9 overall out of 5.

No, Buice Home Improvements LLC does not offer eco-friendly accreditations.

No, Buice Home Improvements LLC does not offer a senior discount.

No, Buice Home Improvements LLC does not offer warranties.

Are there any services Buice Home Improvements LLC does not offer?

not sure, call me and ask we may try your project, we learn quickly