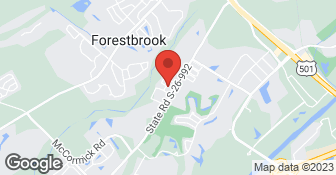 Description of Work
Needed several handyman items handled - ordered the service on January 5th and to date, contractor has not been to my home. Apparently there's a mixup with the money on the part of Angie's List which has delayed services.

Description of Work
Fixed sliding closet doors that no one else seemed to be able to fix. Installed shelves in laundry room. I purchase the special four hours for $249.00. Ron only took 2 hours to complete the work but told me he owed me 2 hours and gave me his card to call him when I needed anything else done. He was so nice.

He's a real nice fellow but we had to have somebody to come and fix some things that we really wanted because he wasn't as good in electronics. We used him one more hour after that. I wished he hadn't because he didn't really solve the problems we needed done.

Description of Work
I used a Big Deal with MTP Handyman.

sorry for any short comings but you had bigger electrical issues then you let on. due to flooding in your area.
4.0

Went well - was able to repair all that he had been called in for.

Professional, eager and on time.

I contacted Ron to do some work in our recently purchased condo. We are from out of state but he made doing business via email easy and stress free. His price was very competitive and his customer service was excellent. He did a fantastic job with a very quick turn around. The quality of his work was great. I will definitely be using him in the future.

Excellent service, same day response, I will always use Ron in the future!

They originally came with two men, Ronny, the owner, and his partner, I believe his name was John. John did some work in the kitchen and I wasn't that pleased with the painting aspect of it. He did not come back the next day, but Ron came back and he finished the job and did some other things. He was very personable and very nice. The only thing, and I'm not complaining about it because I'm about his age and he was an older gentleman, but he would get down on his knees and groan trying to get up. It didn't affect his work at all, but I'm thinking to myself, gosh, he sounds like me. Overall, I was pleased with them. I thought the price was a little high as they charged $45 an hour. So, when the men were here, I was paying $90 per hour for the two of them and that's the reason I wasn't too happy with the painting job. They were on-time. When Ron said he'd be back he was here at the time. He was looking for a lock for my french doors going out to the back porch. He took it with him and said he was sure he could find and repair it but I hadn't heard from him. I called and he said he hadn't had time to look but he was going to a place today and he'd let me know but I've never heard back from him. So he may have forgotten, or he may not have found it, but a phone call would have been appreciated. I would use them again in future if we could talk about the price.

Description of Work
I used MTP Handyman for a home project, which included painting.

Ron is the best. I recently purchased a couple of rental units in Little River and MTP has helped me on several projects ranging from doing the demo on a bathroom to wiring a unit for cable to installing a ceiling fan. His work is always top quality and he has always done exactly what he said he would do, when he said he would do it, for the price that he quoted. Ron is an honest, hard working guy with wide ranging skills. I give him my highest recommendation.

I provided the parts (ballast and bulbs). Required 2 visits, because I had to go to Lowes to purchase the ballast. The actual repair was done in less than 1 hour. I thought the $90 charge for labor was excessive. You decide. Otherwise, the service was excellent.

Description of Work
Changed out ballast and light bulbs in flourescent light fixture.

I've used Mr. Burtis in the past and was very happy with his work so when I had a short list of items around the house that needed repair I didn't hesitate to call. He showed up prepared and had everything completed in no time at all. I will definitely use MTP for all my future home repairs.

Description of Work
He repaired a couple of light fixtures, replaced a screen door handle, and caulked around the front door.

Needed someone to remove and replace two light fixtures in a residence -- one chandelier and one flush mount. Called MTP on a Sat expecting to get a VM but Mr. Burtis answered and agreed to come by and give an estimate that afternoon. Showed up very unkept and unprofessional looking and his estimate was almost double that of another Angie's list contractor. Will not call again.

Description of Work
Contacted for estimate. Showed up on time but unshaven for weeks--very unprofessional appearance. Estimate was much higher than other Handymen on Angie's list. Gave the job to someone else.

A wonderful experience, I will most certainly use MTP Handyman Service again.

Description of Work
Owner, Ron Burtis came out and gave a free estimate to change out 2 hanging light fixtures (one in the foyer and the second over the dining table) and 2 ceiling fans (one in the office and the other on a balcony). Arranged to have him do the work a few days later, he called to confirm the appt the night before. He did a great job and was very respectful of my home and chatted with my elderly mother making her very comfortable with the entire experience. As he was leaving my home, my smoke detector started to "chirp" and I didn't have a replacement 9V battery. Ron went to his truck, grabbed a battery and replaced it before he left. Was very nice of him and I appreciated his willingness to go above and beyond!

Here at A-Team Doors and Windows, we take pride in our professionalism and attention to detail. We emphasize our business structure on pleasing our clients and gaining a friendly rapport with everybody we come in contact with. Our team has years of experience and we strive for perfection no matter how big or small the job may be. We offer very competitive quotes and accurate deadlines. If you’re looking for quality work at a quality price done by quality people, then you’ve come to the right place and we’d love to have you on board!  …

Free estimates. No subcontractors. Owners always on site. We take pride in our work. We are insured and bonded.  …

Insured
All statements concerning insurance, licenses, and bonds are informational only, and are self-reported. Since insurance, licenses and bonds can expire and can be cancelled, homeowners should always check such information for themselves.To find more licensing information for your state, visit our Find Licensing Requirements page.
General Information
Free Estimates
Yes
Eco-Friendly Accreditations
No
Payment Options
Check
Senior Discount
No
Emergency Service
Yes
Warranties
Satisfaction

How is MTP Handyman overall rated?

MTP Handyman is currently rated 4.4 overall out of 5.

What days are MTP Handyman open?

No, MTP Handyman does not offer eco-friendly accreditations.

No, MTP Handyman does not offer a senior discount.

Are warranties offered by MTP Handyman?

No, MTP Handyman does not offer warranties.

What services does MTP Handyman offer?