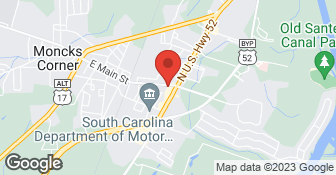 Biotek Environmental Mold Removal serves the state of South Carolina and parts of Georgia and North Carolina with offices in Columbia, SC and Greenville, SC. Biotek provides mold and moisture related services (investigation and remediation), flood recovery, fire restoration, crawlspace moisture control, encapsulation and dehumidification, steam pressure washing and carpet cleaning services. We know that you have many companies to choose from, and recognize that our success depends completely on creating a reputation of integrity, fairness and customer service, so maintaining great customer relationships is critical to us. As a result, our approach to customer service is simple, and that is to "always do the right thing, no matter how inconvenient it might be or how much it might hurt". Because of that unwavering focus on our customers, we are proud to have received the Angie's List Super Service Award for five consecutive years, and we are an A+ company with the Better Business Bureau in all of our markets. We encourage you to go to our website at www.biotekhelp.com to learn more about us. Thank you for giving BioTek Environmental, Inc. an opportunity to serve you and your family. Ancel Hamilton  …

Walker Pest Management is a local, family, owned pest control company that offers a full range of services. These include residential & commercial pest prevention plans as well as one-time pest solutions. While our competitors have large initials and startup fees, we try to keep the cost of getting started affordable for everyone. Whether you have a problem with ants, spiders, earwigs, silverfish, centipedes, mice, rats, bed bugs, termites, or even stinging insects like yellow jackets, wasps, hornets, and fire ants we have a solution. Our customer service representatives are ready to help asses your pest issue and provide you with a timely appointment that works with your schedule. You will be given an actual time of arrival not a 4 hour window to wait for someone to arrive. We look forward to working with you and keeping your home or business pest-free.  …

Complete Tree Service has been serving the tri-county area since 1979. Most of our employees have been with us for 10 plus years and are experts in the tree service business. We DO offer a seniors citizen discount as well as military  …

Not well. Could not rely on them and fees extraordinarily higher than competitors.

We purchased a termite bond on our home 7 years ago. Coastal comes out every 3 months to monitor bait stations. We recently hired a contractor to replace our patio door, and he found extensive termite damage, as well as live termites. We called Coastal, and Casey came out to inspect. He said that the termite damage was not covered by our termite bond, claiming that the termites were a swarm. He said that they were there due to moisture from our porch light. However, there is no moisture at the location of the porch light. I brought out another termite company for a second opinion. This company found termite tubes under the home, from the ground to the deck, indicating that subterranean termites were the culprit. They found no moisture at the location of the porch light, and no indication that the termites were swarmers. Coastal still does not want to cover any of the damage. It appears that Coastal's termite bond is worthless.

Excellent. This is a small, family-owned company. They are honest, fair, and ethical. I highly recommend them.

Description of Work
We have had a termite bond with Coastal since we purchased our home several years ago. They come out quarterly to treat for pests, and to check for termite activity.

Great service and great people to work with. They treat us like family! I wanted to write a review because recently Justin Behan, our technician at Coastal, saved us a lot of money. We moved down from Pennsylvania in late 2015 and have been customers of Coastal since March of 2016. The folks at the office are so nice and they accurately keep my two properties separately billed for my accounting needs. Justin is always prompt and courteous. He always takes the time to explain their methods and keeps an eye out for any new issues that pop up. I just had to give them a great review!

Description of Work
I have a second home for my mom nearby. Coastal does the pest control there as well as at my home. (No bugs at either home now!) We thought we might have a rodent problem in my mom’s attic. Justin B. came out and determined that we did indeed have rodents in my mom’s attic. Justin walked us through how to try a diy solution. With his guidance we were able to avoid hundreds of dollars of professional exterminator expense. And if it hadn’t worked, Coastal would take over. So far so good!

This was the second visit but did not follow the agreed-to actions during the visit (first problem, quality of service). Worse, they called and told us when they would be there (second problem, unilateral scheduling) and even though we called them back the same day and told them we didn't want them coming on the day they had unilaterally scheduled, they came anyway (third problem, responsiveness). They could not do the inside work we needed because we were not at home. Worse, they then had the gall to leave a bill on our doorknob for services we did not want and which also served as a flag to announce to the world that we were not at home.

Paid Angie's list and provided 3 dates that worked for me for pest control service. The 3 preferred dates passed without any phone call from service provider. I called them just to realize they didn't see the order come in. The man on the other line was very nice and sincere in his apology. I decided to reschedule for another date. Again the date passed and still nothing to show for it. Fast forward 3 weeks, multiple phone calls to him, and voicemails resulting in no response and no service. Nearly a month after paying an annual service fee, I still have not received service. I eventually went to Angie's list directly for a refund (still in work). Dissatisfied with the whole process.

Well, apparently. But too early to say for sure.

Coastal would not go under the home. They said the access was too small. however it is the same access they have used for the past 20 years. They told us that if their bait traps were covered, additional charges would be added to our invoice. They gave me an ultimatum to overall the crawl space access and I had "14 days to comply". I think they forgot who was paying the bills.

Great, on time and good annual rate for pest control.

Description of Work
We bought annual pest control and seems to work well, compared to other pests control we have used.