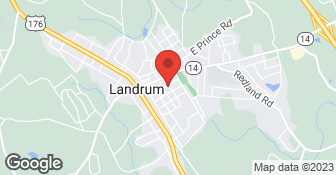 It took 8 months to complete.Couldn't get bathtub right leaked thru ceiling.Had multiple holes cut in walls.Parts that they said weren't right traded out for cheaper parts and not reimbursed for them.They didn't have money to pay for my new counter top so I ended up paying up front and not taken off bill.They aren't qualified to be called contractors.Do not hire them.I ended up paying a lot more than they quoted.

USE A DIFFERENT COMPANY!!! We hired the company back in March of 2014 for a major home remodel. We explained to him that we had a $300,000 budget and what we were looking for. By January of 2015 we were at budget and the house was only half done. A lot of what was done then had to be redone. Here is a brief list: The drywall wasn't staggered, which would have lead to floor to ceiling cracks down the road. The roof was put up without a drip edge for the gutters, it ends flush with the siding, making gutters an ongoing headache while we continue to look for a solution, chances are the whole roof will have to be redone. It took 6 guys 3 weeks to do the roof wrong. We stressed the necessity of soundproof insulation above the shop to prevent noise from bothering those in the rooms above. You can clearly hear two people talking through the floor, far from soundproof. The first four stairs on the inside staircase all had different heights, with a top difference of over half an inch. The overhang on one side of the house had a 7 inch height difference between the right and left sides. They ordered about $5000 worth of extra custom siding that is now sitting in our barn. There was no oversight on what we were being billed for, on a few occasions, in the receipts accompanying the invoices, we would find things like a carton of cigarettes or snacks, and they would charge us 18% on top of that. We believe they bit off more than they could chew on this project, seeing only the dollar signs. There was no oversight, Casey the owner only showed up when he needed a check to continue the work, but when we pointed things out to him that needed to be fixed, he was no where to be seen. He told us he hired a supervisor to oversee the project, but we only saw him the week before we fired them, he didn't help the situation much either.The only time we saw legitimate effort on the project was during the last week, and that was only to try to make up for the all the time wasted in the past months, but that didn't stop him from trying to bill us for all the labor. I would not recommend this company to anyone looking to get anything done.

Our local hardware store recommended them. He was able to come out that day as promised. He showed up on time and did the work quickly. He saved me a lot of grief and consternation. I could have a leak. It is still working and it has been over a month.

Description of Work
We have used Carruth Plumbing. They replaced a wall faucet for us.

Bonded
All statements concerning insurance, licenses, and bonds are informational only, and are self-reported. Since insurance, licenses and bonds can expire and can be cancelled, homeowners should always check such information for themselves.To find more licensing information for your state, visit our Find Licensing Requirements page.
General Information
Free Estimates
Yes
Eco-Friendly Accreditations
No
Payment Options
Check
Senior Discount
5%
Emergency Service
Yes
Warranties
Ask for details

How is Carruth Plumbing and Home Improvements overall rated?

Carruth Plumbing and Home Improvements is currently rated 2.6 overall out of 5.

What days are Carruth Plumbing and Home Improvements open?

What payment options does Carruth Plumbing and Home Improvements provide

No, Carruth Plumbing and Home Improvements does not offer eco-friendly accreditations.

Does Carruth Plumbing and Home Improvements offer a senior discount?

No, Carruth Plumbing and Home Improvements does not offer a senior discount.

Are warranties offered by Carruth Plumbing and Home Improvements?

No, Carruth Plumbing and Home Improvements does not offer warranties.

What services does Carruth Plumbing and Home Improvements offer?