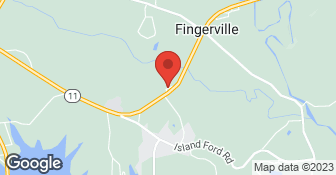 Description of Work
Replaced entire original roof of house from 1965. This included new OSB roof decking, felt padding, & 30 year architectural shingles. Larry w/ Davis Roofing was phenomenal from start to finish!!!! Best remodel / construction project I have ever had done at my house. Highly recommend and will use for all future roofing needs.

I would recommend them to anyone. They were able to do the roofing in one day. They clean up behind themselves. They don't leave any trash or nails laying in the yard. They finished the job in a timely manner.

Description of Work
They replaced our roof.

Kevin told me what to expect during the installation of the new work and estimated how long it would take.All expectations were met. In 2 1/2 days I had a beautiful new roof and the area around the house was as clean as the day they arrived. Jimmy

Description of Work
Kevin Mayfield inspected the roof and said it looked like hail damage & that I should file a claim with insurance company. Kevin was present when Insurance adjuster came. 3 we3ks later Davis Roofing was installing a new roof.

Our contact was Kayne London. He was very professional and very responsive. It was a difficult job in that a lot of the subroof needed repair and there had been a lot of prior leaks. And it is a flat roof. It is a 5 layer built-up roof process. It rained very hard after the first three layers and we did have some significant leaks. They had thought it would hold with the 3 layers but there were areas that did leak. They compensated to repair the area of new sheetrock that was damaged. They had also hit a stone wall and are replacing that. They have finished the built up roof and the warranty from the manufacturer is in the mail; what a relief to get to this point! They still have to complete the tile roof as the materials did not arrive as expected. They have generally been punctual, abut sometimes show up a day later than stated, but usually let us know what is going on. Kayne has checked in after other recent rains to make sure things are good and we are happy. He was very professional to work with which is immensely appreciated.

Description of Work
Removed 4 layers of flat roof and replaced with a commercial grade built up roof. Also replaced an area of tile roof.

Description of Work
They were punctual, fast, worked hard, courteous, cleaned up great , very professional, and patiently answered all my questions, both before and after the work was done.

He was very honest. We split time between IN and SC and he made the job go as smoothly as possible. He had great communication through the phone and kept us in the loop about the project. The end product looks great.

He worked at helping me with the insurance adjustor. Then he saved us both money when he discovered he did not neeed to replace as much woodwork as was originally estimated. Then his crew replaced the roof, and shingles in one day, including cleaning up .

i was very pleased that they work continously and it only took 6 hours...they didnt fool around or take their time...i will recommend them to others

Description of Work
they removed old roof...and replaced with architectural shingles...they moved all patio furniture..and placed tarps around the house to catch the debris..they were very efficient and courteous ..

Description of Work
Contacted company for roofing needs. They said they could handle estimate over phone and requested the insurance quote to be faxed to them. This was done and follow up calls were made but company never responded. Work done by another company that responded promptly.

They were fair, thorough and there was no need for a visit after the unit was installed. I will use them again in the future.

Quick, efficient, and very thorough from start to finish.

Description of Work
The company representative worked with the insurance adjustor in getting him to approve the roof due to hail and wind damage. The first insurance adjustor declined the claim because he did not see the specific damage that Dave's Roofing pointed out. I proceeded to use Dave's Roofing for the job, based on this service and the adjustor telling me that they knew what they were doing. They came out in two days and finished the job in only one day. This also included replacing many boards under the shingles that were damaged. I am pleased with the quality, professionalism, and price Dave's Roofing provided. They also submitted very detailed paperwork to my insurance company which helped me get full reimbursement for my expenses!

Workers carelessly threw old shingles into gardens, even after I told them to throw shingles to one side only. Minor but acceptable plant damage. After initial installation, noticeable color mismatch on one side due to not rotating shingles from multiple bundles. Needed to convince them of problem - even though obvious in the dark. Once mismatch was fixed, roof leaked at skylight after heavy rain. Roofers came back out in a timely manner and applied caulk to affected area, which stopped leak. Three weeks later after another heavy rain, another leak from garage soffit - due to downspout routed behind shingles. Again came out - with manager this time - and caulked but leaked again after next rain. Noticed that caulk was performed around downspout, instead of at downspout. This shoddy work was performed by the manager, no less... I re-routed downspout to alleviate possible future issues. Six months later another rain produced another skylight leak. Again a caulk job was performed. Caulking is not a suitable solution for roofing! Flashing and proper installation is what should make a roof waterproof. Company was reasonably responsive, price was reasonable but workmanship was shoddy. Not sure how long until next leak or if company will continue to be responsive.

Description of Work
Re-roof attached garage and breezeway, with single skylight in breezeway after remainder of home was re-roofed. No leaks prior to re-roofing. Single story for both structures. Complete tear off, replace damaged boards/substrate, reflash and new architectural shingles.

The workers arrived early worked very hard all day. work was completed in 1 1/2 days. The workers were very professional, answered all of our questions, did a good job of cleaning up, and a repr came to check the job while work was in progress and after the job was complete. We were pleased with the overall project

Description of Work
Removed and replaced roof as well as all vents, flashings etc. The roofing material is a 40yr arch. Shingle, manf. by GAF roofing

Southern Home Comfort is local and Family owned. We take pride in our work, is it really a job when you love what you do? We are a State Licensed Mechanical Contractor. Certified in many different fields. Owner operated company, which means you don't have to jump through hoops to get issues solved. We have over 15 years of comfort experience. Give us a call  …

Thompson Heating & Air is a Quality Service and Installation company for Residential and Commercial Heating and Air Conditioning . We have been servicing the HVAC needs for the residential and commercial customers in the Spartanburg, SC area since 1987. We service, install and offer all major brands. We work to ensure that you have reliable indoor comfort that you can depend on. Our licensed mechanical technicians optimize the performance of heating, cooling, and ventilation systems. They can clean air conditioning systems to help keep summer bills low, and tune up furnaces to keep homes comfortable in the winter.  …

Davis Roofing Group is currently rated 4.6 overall out of 5.

No, Davis Roofing Group does not offer eco-friendly accreditations.