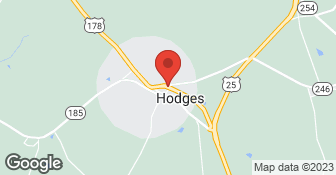 OWNER-OPERATED. NO SUBS. COST IS DETERMINED BY THE JOB. TRAVEL CHARGES MAY APPLY. NO SERVICE FEES. MAY CONTACT THROUGH EMAIL.

Dewitt Anderson started out rude and got worse from there. I needed a service call on my existing gas logs. I went to Firehouse Casual Living store on Congaree in Greenville. They recommended this guy highly and gave me his card. I called and explained what I needed done. He ask me how long the front log was I currently have. I replied, "let me get my tape measure but the unit is 30 inches." He cut me off and said NO I NEED THE LENGTH OF THE FIRST LOG. He gave me a quote of $500. I said I hadn't planned on spending that much. He called me cheap. I asked if that price included labor. He said no and that the service call would be 200 bucks. I said 700 dollars can get you a good set of gas logs installed from Home Depot. He said, "you should have gone to Home Depot in the first place because you are cheap." He continued ranting about something so I just hung up. I called Firehouse and told him what this guy had said. His response startled me. He said this guy, Anderson can act up and make people mad and he has had complaints over the years. I asked him why he recommends him and was told he is the only guy in town that can do the work. I let him know he just lost a customer as well. ---I have seen some positive reviews for Anderson's Gas Service LLC, but I notice they are several years old.

Dewitt is extremely professional, readily available, and quickly fixed the problem. Price was very reasonable. Would strongly recommend him!

Dewitt was very responsive and came out to the property on the same day. Took apart the gas logs and cleaned twice to make fully functional again. He also added some embers, at no extra cost, then set up, lit up, and tested logs before leaving. He definitly came through for me when I needed him and would recommend to anyone that needs work on their gas logs or appliances.

Description of Work
Cleaned gas logs, tuned up system, and set them up with pilot light

This is my second experience with Mr. Anderson. He is very professional, punctual, courteous and reasonably priced. I have never had better service.

Bonded
Insured
All statements concerning insurance, licenses, and bonds are informational only, and are self-reported. Since insurance, licenses and bonds can expire and can be cancelled, homeowners should always check such information for themselves.To find more licensing information for your state, visit our Find Licensing Requirements page.
General Information
Free Estimates
Ask for details
Eco-Friendly Accreditations
No
Payment Options
Check
Senior Discount
NO
Warranties
Ask for details

ANDERSON'S GAS SERVICE LLC is currently rated 4.8 overall out of 5.

No, ANDERSON'S GAS SERVICE LLC does not offer eco-friendly accreditations.

No, ANDERSON'S GAS SERVICE LLC does not offer a senior discount.

No, ANDERSON'S GAS SERVICE LLC does not offer warranties.