RAINMAN GUTTERS OF THE UPSTATE 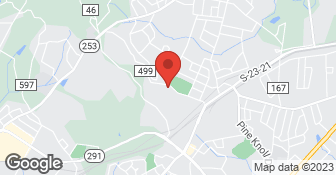 I actually brought them out here to give me a gutter cover estimate. They're estimate was uh, so reasonable, let's put it that way. Not low, but I'll probably have them replacement the gutters too. He came out here, he said he was between jobs. He came out here in about fifteen minutes, and he was here. He sounded like he knew what he was doing. He was the owner of the company, and would be the person who would be installer, or they would do it under his direction. He did a fancy job. Quality of the experience, it was a super experience. Responsiveness on the quote I would give him an "A", because he came right out. Responsiveness on his follow-up, he's not going to be so good, because I'd called him and said, I told him that day I wanted him to do the job.

Description of Work
The old "round" gutters were removed and new square ones were installed, with new overflow splash guards. They alerted us to a loose ceramic tile on one of the peaks which could have done a lot of damage. They did an excellent job and even helped us out on a window replacement project while they were there with their tall ladders.

Our home is new construction (occupied 17 months ago). Our gutters were totally clogged in some instances. Tory came out at the request of the builder to fix a small leak. I immediately had a good impression about Tory, as he was polite, knowledgeable, and had a "let's get this done right" attitude. I was glad to find out that he also cleaned gutters. He quoted me a very fair price and promised to come out the next day. He arrived on time the next day and completed the job in fine fashion. He thoroughly cleaned the gutters, flushed the downspouts through the underground pipes, and left no gutter debris on the ground. I would definitely recommend Tory and Rainman Gutters.

Tory was on time for the appointment, listened to what I wanted and needed. He made some good suggestions and gave me a price and work schedule on the spot. His crew came out on the day appointed, did the work and left. What's impressive is that they left it clean. We had heavy rain since the installation and the problems with my gutters were solved and I'm looking forward to not having to clean them this fall. I highly recommend Rainmain Gutters.

Description of Work
Cleaned gutters and added leaf guard system to our gutters.

The gutters look nice on the house and the downspouts were placed where they would not be in the way.

Description of Work
We recently purchased a house in the area and the previous owner did not put gutters on the house. We know the importance of having them so we wanted to not only have gutters but also the kind where leaves will not get into them as we do not want to be cleaning out any gutters.

Tory Rauschenberger with Rain Man of the Upstate was very responsive to the request for providing a proposal for installation of the gutter guard system he sells/installs. Following agreement of the proposal, Rain Man arrived as scheduled to complete the work. Work was completed in a very timely and professional manner. Quality of work was very good. Site was left in a clean condition with all scrap and debris properly disposed of.

Rainman Gutters came out and provided an estimate for removing the existing Gutter Guard gutter system from my house including downspouts. They also provided me with a quote to install new gutter covers. The quote for new 5"gutters, downspouts and covers was fantastic. The two gentlemen that came out to do the removal and install were on-time, polite, professional and detailed oriented.The gutters and covers were properly installed and sloped correctly using a level. Fascia damage from gutter guard system was repaired and flashed properly prior to installing new gutters. All scrap and trash was cleaned up immediately after installation. This was a fantastic company to do business with!

We Are The Light

We Are The Light is the Carolinas trusted outdoor lighting company. Illuminating your home or office with outdoor LED lighting is one of the best ways to both enhance and secure your home or business. Each home and office is unique and so should the approach to enhance your property. With our no cost evaluation we will do a comprehensive review of your property while considering many aspects from hardscape and softscape lighting, architectural accents and of course security. Combined with state of the art low voltage LED fixtures and the depth of our lighting design team, we will elevate your property to a new place that will cause your property to come to life each and every evening.  …

Frequently Asked Questions & Answers about RAINMAN GUTTERS OF THE UPSTATE

How is RAINMAN GUTTERS OF THE UPSTATE overall rated?

RAINMAN GUTTERS OF THE UPSTATE is currently rated 5 overall out of 5.

What payment options does RAINMAN GUTTERS OF THE UPSTATE provide

Does RAINMAN GUTTERS OF THE UPSTATE offer free estimates?

Does RAINMAN GUTTERS OF THE UPSTATE offer eco-friendly accreditations?

No, RAINMAN GUTTERS OF THE UPSTATE does not offer eco-friendly accreditations.

Does RAINMAN GUTTERS OF THE UPSTATE offer a senior discount?

No, RAINMAN GUTTERS OF THE UPSTATE does not offer a senior discount.

Are warranties offered by RAINMAN GUTTERS OF THE UPSTATE?

What services does RAINMAN GUTTERS OF THE UPSTATE offer?