We specialize in residential and commercial roofing as professional roofing contractors for new roof or roof replacements, repairs with a guaranteed free inspection. Stucco or EIFS and stone veneer is a beautiful combination for a residential home or commercial building. We also provide turn key commercial services

Was told it was the boot, so paid $500.00 minimum charge to have two boots replaced and roof inspected. Was told by gentleman who replaced boot, wasn't sure why we needed the work done they looked good but it was warranted. The leak was not fixed, in fact if the roof would have been inspected they would have found wood had rotted away. Tried to call and email since the work was warranted and the problem wasn't fixed but no one called back or replied.

The company called back quickly. I told him what I needed and we set up an appt. He then told me that there was a $500 minimum to do a job, it didn’t matter if I needed $200 worth of work they would still charge me $500. He didn’t understand why I was upset at that since he was telling me upfront. I suspect the job would have met the minimum but I couldn’t get past charging people that much if all was needed was something small. People in this industry I guess can afford to only do larger jobs. Angie’s list needs to take this company off its list.

Description of Work
I needed someone to come out and give me an estimate on Work I was ready to hire for.

Wes came out and reviewed. Suggested removing shingles and flashing in the valley to determine where leak was coming from. This included an estimate for replacing shingles, plywood and extending the ice and snow shield further up the roof. It was determined that the leak was due to the flashing not being extended when my roof was replaced six years ago. Also had no problem adjusting the invoice due to not having to replace the plywood sheathing.

Description of Work
Repair roof leak in a valley

Description of Work
Had leaks around chimney after roofing job completed. Charged us an extra $225.00 to come back out & "fix". All they did was caulk & it still leaked. Were left with significant ceiling & Sheetrock damage in the den. They would not take responsibility for the leaks. Said the chimney already had a leak before the roof was put on. Wanted to charge us an additional $2500.00 to completely re-do the chimney. Had another roofer come out to repair leak & discovered they had not flashed around the base of the chimney. Has to pay him $650.00 but at least it fixed the leak.

Description of Work
They were great and very affordable. We originally had them come out to take a look for a possible leak in our roof, but they advised us that the issue was easy to resolve on our own (roofing caulk). At that time, we have them provide an estimate for gutter guards and within a week the work was completed! Their pricing is very reasonable. They are professional and friendly.

Representative was cordial but did not seemed interested when he realized roofing repair needs were primarily ridge vent repairs and boots or replacement and not full roof replacement. When I told him insurance rep.. would be by this week and verify coverage I was told have your agent call me if you want and we'll work something out. When asked if he would get back with me on an estimate I was basically told wait and see what your insurance says first. Rep. Left and never heard from the company again.

Couldn't say enough great things about them...professional, prompt...I have referred them to others

Description of Work
Replaced our roof

We chose Exterior Specialists because their price was the best. The crew was on time and polite. The work was done quickly. The crew cleaned up after the job was finished. We were very pleased.

Description of Work
Exterior Specialists tore off the old roof and installed a new one.

2 years ago, Exterior Specialists replaced our roof. For the most part, we have been perfectly happy with the roof. But a few weeks ago we noticed a small leak discoloring the ceiling in my daughter's room and in the ceiling on the first floor just under that room. When I called Exterior Specialists, they said they would come out and fix it under the roof's warranty. However, it took several attempts to finally get someone to come out. There were multiple occasions of promises to call back and quot;in 30 minand quot; and set up a schedule that never happened. Then, after finally setting up an appointment on a Friday, no one showed up. When I called they apologized and set up a time to come out the following Monday. They then canceled that Monday morning after I had rearranged my work schedule to be at home. Finally someone came out. This person was very nice and very apologetic. He believed he found the problem and said it would be a simple/free fix. He was to email me pictures in the next day or two. Several weeks later, after multiple phone calls, I have yet to receive that email. On Friday (I am writing this on a Sunday), this person promised to hand deliver the photos on Monday, saying the business is having some issues with their email account. This person claims the fix has actually been done. However, as it has been raining all day today in Greenville, I can say without a doubt that the leak is not fixed. The carpet in my daughter's bedroom is wet to the touch, as is the ceiling. Even though I should be eligible to get this leak fixed under warranty, I will be calling another company tomorrow.

We have reviewed this client and don't have any invoices under this name or address. We have had contractors leave Exterior Specialists and complete jobs using our company name. We would love to see an invoice because we keep everything on file. Thanks
3.0

I really like their salesman and I thought they really did a good job in our roof but the siding contractor that they use, we were not happy at them at all.

Description of Work
We used Exterior Specialists for siding and roofing. They put a new roof and they also subcontracted the sidings of our house.

Exterior Specialist gave me an estimate to fix the roof. It was fine. I just ended up not going with them. They were too expensive. They were on time. I would not use them; they are to expensive.

Description of Work
Gave me an estimate to fix the roof.

I had a good experience with them. They came over and I explained everything. They helped me through the process and I had no problems with them. In fact, I was out of town and when I came back I was impressed with their job. They did a good and a clean job. I didn't find any trash around when I came back. The price was taken care of my insurance company and they didn't complain about it so I assume it was a fair price.

Description of Work
I have used Exterior Specialists company for roofing services. They put on a new roof for my house.

These guys are awesome. I thought for sure I had found the provider I was going to use and then these guys showed up and from then on it was just effortless. They took care of everything. I never asked "hey can you guys do this" they always just offered how they would take care of me. There were items like sealing a small section of metal roof over our kitchen and repairing an area on our garage that were not part of the bid, but they did anyway. We have a fairly large house and they were done in 2 days. Whether it was for a quote or service, they showed up and left when they said they would. At bid, there was no upsell for different types of shingles, they only use high quality architectural shingles. My house looks awesome. I've used many contractors over the years and wouldn't recommend many, if any. I whole heartedly recommend Exterior Specialists. If you need roof work. Call these guys!

Description of Work
They stripped my old shingles, put on new shingles, repaired gutters and fixed some metal roof areas.

We attempted to get three estimates, however we ran into a lot of problems with "siding" companies (listed on Angie's List) not wanting to do the work because it wasn't the entire house. One company with a good rating referred us to a sub contractor who set a number of appointments with us for estimates only to forget them and after two weeks of this decided that our house was too far out of the way. We ended up with two estimates. Then we called Brandon with Exterior Specialists who we found with great ratings on Service Magic. He responded to our request very quickly, was polite and professional, and showed up as scheduled and on time. After taking measurements we had an estimate emailed to us within two days and was well below the other estimate. We accepted the estimate and had the work scheduled for the following week. The work took just over one day. The siding match was near perfect and the work was top notch. You can't tell that the siding isn't original except that it is a lot cleaner which will force me to get out the pressure washer. I couldn't have asked for a better service and would highly recommend Exterior Specialists to anyone. What started out as a nightmare has turned into great experience.

Description of Work
We had the vinyl siding on one side of our house replaced due to hail damage.

They were on time and did everything they said they would do. I am giving a B, not based on their work, but based on the fact they damaged some shrubbery.

Description of Work
They put a roof on my home about a month ago. 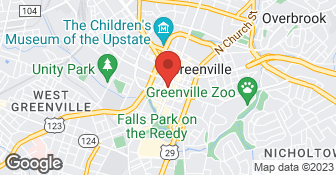 Exterior Specialists | Greenville is currently rated 3.9 overall out of 5.

No, Exterior Specialists | Greenville does not offer eco-friendly accreditations.

Are there any services Exterior Specialists | Greenville does not offer?