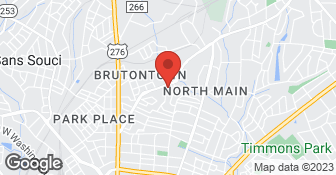 Your Fully Insured Local Roofing Company. Cornerstone Construction has been built on integrity. We provide our CC Family with the best quality products at affordable rates. Our services include roof replacement, roof repair, solar installation, and commercial roof repair/replacement. Call today for your FREE roof analysis

Replaced new shingles over rotten decking! Rebuilt fireplace that was destroyed during Hurricane Sally in Orange Beach,Al when it rains it’s like a funnel! Called repeatedly for POOR WORKMANSHIP to be fixed but got no successful work! All this company does is run to people in need at the time of need!

We're a family owned and operated business with over 20 years of experience. Run by a father and three sons, we use quality subs that we've used for over 20 years. 0% financing available.  …

Cantey Foundation Specialists is a trusted foundation repair company providing residential foundation repair, crawl space repair, wood rot replacement, and concrete slab leveling throughout South Carolina and Augusta, Georgia area. Our focus is to provide homeowners with permanent, affordable solutions for their damaged foundation. As a locally owned and operated company, we give our clients the personalized service they deserve when it comes to maintaining a secure foundation and a safe home.  …

Bradley Construction is one of the premier construction companies in Greenville, SC and the surrounding areas. We are locally owned and operated full service construction contractors. We live and work in this community and believe in treating our neighbors and customers the same way that we would like to be treated - with integrity, honesty, and respect. We strive to provide you with the highest quality service and always go the extra mile to ensure customer satisfaction. At Bradley Construction we use only premium materials and recommended, current installation techniques supported by manufacturer’s guidelines. Respect of each Home Owner is a priority. This involves proper precautions in the maintenance of cleanliness and the protection of all property; this includes thorough clean-up at each day’s end. About the owner - Terry Bradley graduated from the Citadel University in 1986. He has 25 years construction experience. He became a licensed residential home builder in 1999. He has extensive education and experience in the following areas - residential home building, home remodeling, roofing, windows, siding, decks, kitchens, bathrooms, additions, pressure washing and gutter installation. We are licensed, bonded and insured. We do - new home construction, remodeling, roofing, siding, windows, carpentry, decks, porches, kitchens, bathrooms, drywall, gutters, flooring, painting, pressure washing and much more. The owner and most of the employees grew up in Easley. Award winning. Additional email - quotes@bradleyconstructionsc.com, info@bradleyconstructionsc.com, billing@bradleyconstructionsc.com, customerservice@bradleyconstructionsc.com. Additional phone - (864) 303-5677.  …

How is Cornerstone Construction overall rated?

Cornerstone Construction is currently rated 1 overall out of 5.

What days are Cornerstone Construction open?

No, Cornerstone Construction does not offer free project estimates.

No, Cornerstone Construction does not offer eco-friendly accreditations.

Are warranties offered by Cornerstone Construction?

No, Cornerstone Construction does not offer warranties.

What services does Cornerstone Construction offer?