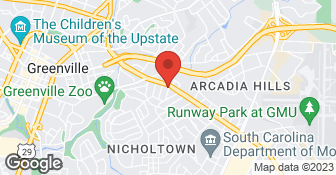 Great! It's a Kenmore-Sears said it would take 12 days for them to come out. Todd came, knew what was wrong, had the part and fixed it. Great service, very professional and personable. Would use again. Also, came within a few hours of our call.

Description of Work
Refrigerator was not working. It's a Kenmore-Sears said it would take 12 days for them to come out. Todd came, knew what was wrong, had the part and fixed it. Great service, very professional and personable. Would use again.

Was put in touch with Banks via our home warranty through Choice. They sent a technician out who advised he thought the problem could be (had to call someone else because he said he really wasn't sure) that the dishwasher was not filling up with water so decided to replace the water valve. He returned a couple days later and replaced the valve but after running the dishwasher many times the problem was still there. He returned and this time said the problem was the pods were were using for detergent. Said we need to get powder detergent then that would fix the problem. Purchased powder detergent and problem still there. Called Banks back and they said to run a cycle with vinegar. Ran the cycle with vinegar and problem still there. Called them back and a very rude girl on the phone said they did what they could and would not be returning. I explained that the problem was not fixed and she said again they would not be returning. Called our warranty and they apologized profusely and sent another company out. Second company determined that dishwasher was not fixable and a new one was needed. Would not recommend Banks to anyone!

Description of Work
Dishwasher is leaving a film on dishes and not cleaning completely.

I called Banks Appliances and told them that I was pretty sure that my dryer vent was clogged ..... The trip to come out was 65.00 but the trip charge is dropped if they do the repair. They came out and said "The the dryer vent is clogged ". Then I was informed that they do not do that type of work. If they had told me up front that do not repair clogged vents, I would not have used them. I think since I told them up front that I was pretty sure the vent was clogged that they should have told me that they do not repair clogged vents. Then I could've made the choice of whether I wanted them to come out and diagnose the problem for $65. Not fair practice at all. Why would I call duplicate repair companies ? I called their office and complained and they did nothing to resolve the issue. Will not use them ever again. Deceptive practice in my opinion.

Description of Work
Diagnosed the problem but then told me that they do not do that type of repair.

They did what they said they would do as far as the sale of the item that we got, they did not back it up as we thought they would. We had a problem during the winter weather, and it got damaged, but they had not warned us about that. Common sense may be on our part should have kicked in, but we did not think about it. The washing machine pump froze and we felt like they should have helped us with that, but they didn't. I bought some parts from them later, and the parts were usable and worked. I don't know if I will ever go back and get a washing machine from them. The machine seemed to be in good condition when we bought it, but it was in an outdoor storage area, and we felt that when they came to install it, they should have said we should look out for this. The install guys would have been great if they would have come out and said that because they were putting it in that place, we should look out for freezing weather. We didn't feel like the product was overpriced, or misrepresented, it was a good product. I would recommend them. As a used appliance place, their people are knowledgeable, and their products are good. It took 2 phone calls to get it scheduled, and that wasn't all their fault either.

Description of Work
We used Banks Appliances. We purchased a used washing machine from them.

He knew what was wrong and fixed it. Quick and easy. Very happy.

I have left messages after messages to have the part ordered and can not get anyone to call me back , order the part or even talk to me. When I call one number, I am told to call the service department, and when I call the service department I was told to call back and leave a message. I have been doign that for two weeks and no response. I feel I was ripped off my orginal $65.

Description of Work
I had Banks out to look at a dishwasher. Based on the problem, I was told to call them back if it leaked, they would order the part, and take the original 65 off the second service call.

Washing machine stopped working. Called Banks Repair. They came later the same day, diagnosed the problem and gave a reasonable quote. They also gave us information to consider about repair verse replacement. We decided to have the repair made. So Banks came back the next day with the new pump and made the repair. Very nice folks. I will use them again and highly recommend them.

Excellent service from placing the call through the technician perfroming the service.

Description of Work
Evaluated dryer and replaced heating element. Cleaned out dryer vent to improve efficiency. Services performed on the day the call was intiated.

I will not be call Banks for anything in the future. I needed to have my washer serviced. I called and gave them my information and was told that they could possibly get to the same day, if not the next. They would call me when on there way. To make a long story short they did not call like they said and when I called back he was like "who are you". I will not call them again and plan on finding someone else!

Description of Work
I am moving and wanted to get my LG washer serviced, drained, etc before we moved.

Even though I live outside their normal service area they came and fixed the refrigerator. They came when they said they would and they called before they came - all within 24 hours of my call. The price was reasonable for the parts and labor. The technician (Todd) was personable, polite, and professional. I could not have asked for a better experience getting repair work done.

The man arrived on time, fixed the problem, and handled himself professionally.

Description of Work
The oven in our range was not heating. They found the problem right away and fixed it.

Start to finish - a great experience.

Description of Work
Was thinking I would have to get a new washing machine - but asked Banks to come out and check it just in case it could be repaired. Sure enough - it was the a small part and the experience was great! Thank you Banks Appliances for saving me $800.

She, and I, could not have been happier with the experience. He checked out the washer and informed her that the transmission is bad and the appliance is not worth paying that much to have it fixed. I know a little about appliances and that sounded about right given the problem. He said the dryer only needed "new pads" and he'd only charge her seven bucks to replace them. In the end, he charged nothing to replace them and all we paid was sixty five bucks. We listed the dryer on Craigslist and got a buyer almost immediately. We bought a new washer and dryer after work and it will be delivered Saturday. Sure, I wish he could have fixed the washer for $100-$200 but $65 is cheap to get a professional diagnosis. I could have figured it out myself but what took him a half hour or hour would have taken up half my Saturday.

Description of Work
Our washer and dryer both developed problems at almost the same time. The dryer was making squeaky noises and the washer wasn't agitating at all or spinning adequately to dry the clothes. My wife called a couple of places and didn't like the fact that Banks wanted $65 to come to the house whether he fixed the appliance or not. I pointed out to her that it isn't reasonable to ask someone to come to our house to diagnose it and not get paid if we don't hire him. Plus, $65 sounded cheap. She also seemed put off by his phone demeanor. I told her that not only are good appliance repairmen not necessarily charming, con men are charming. Besides, the other place she called didn't promptly call her back. Reluctantly, she hired him.

I would not recommend this company to others. They were not on time and I had to call them twice and then when he came he did not have the correct part. I have given him my dryer information and he knew what was wrong with it. They needed to come back another day with the part and I was not too happy. I have other things to do besides wait for the dryer guy. The dryer does now work but I would not call this company again.

Description of Work
Bank s Appliances came here to fix my dryer that was not heating up.

Bonded
Insured
All statements concerning insurance, licenses, and bonds are informational only, and are self-reported. Since insurance, licenses and bonds can expire and can be cancelled, homeowners should always check such information for themselves.To find more licensing information for your state, visit our Find Licensing Requirements page.
General Information
Free Estimates
No
Eco-Friendly Accreditations
No
Warranties
Yes

How is BANKS APPLIANCES overall rated?

BANKS APPLIANCES is currently rated 3.9 overall out of 5.

No, BANKS APPLIANCES does not offer free project estimates.

No, BANKS APPLIANCES does not offer eco-friendly accreditations.

Are warranties offered by BANKS APPLIANCES?

What services does BANKS APPLIANCES offer?