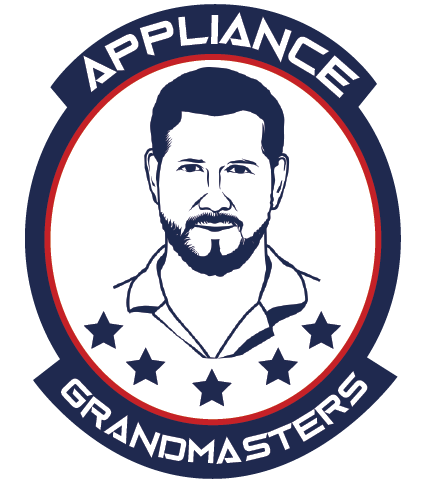 Appliance GrandMasters of Greenville is a Family Owned appliance repair company. Our factory trained service technicians are experts in the repair and maintenance of most major brands of appliances. From first contact to job completion, you can be assured of professional and affordable appliance service and repair. We offer fast, friendly and courteous service. We use only the best products and equipment and maintain a high skilled staff to answer any of your questions. We have built our reputation on our commitment to providing quality service, which has earned us many valuable customers

They were very good. Their job was to install a new ice maker that I had to order. Their work in installing was excellent.

Everything went fine. We just had to wait for the part to come in. The refrigerator needed a new compressor. We made the call for service on 10/28 around noon. The next available service appointment was the next day, which meant we had to buy a small chest freezer in order not to lose all of our food. The part was not available until the following Monday 11/02. The repair was scheduled for the next morning, which meant having gone 6 days without a working refrigerator. They were able to at least keep the freezer side at just under 40degrees, which bought us some time on some of our refrigerated items. I've used this company twice and encountered the same issue both times. Parts had to be ordered, so the repair was not completed until the following week. I would just say that in an emergency, such as a failing refrigerator or washing machine, I would have liked a faster turn around time. I have no problem with the quality or price of the repair, and the appointments are usually within 24hours of the initial call, with repair appointment s usually the day after the parts are received. I just had the misfortune of both of my issues occurring mid to late week, so the weekend extended my service time.

it went bad at first . some of the repair men didnt do a good job and it took about three weeks to get it right but in the end the owner made it right and is now taking steps to improve i will hire them again

Service rep wash there when promised, was knowledgeable and honest. I would highly recommend them.

Exceptional! Will came out with a compressor in hand, but determined the coils also needed to be replaced. He coordinated for a temporary refrigerator to be delivered within 2 hours and scheduled a follow-up to replace the coils and compressor. He explained everything he was doing while I watched. Very professional and friendly. I would highly recommend Mr. Roger's Appliance repair and will definitely call them for any future issues.

This Company was organized, efficient, took my personal calls, had robo reminder calls, a technician who called ahead, had all the parts and got them on the machine with a minimum of effort while educating me at the same time. Use with Confidence.

Description of Work
I have a house warranty service. I called the service last October. My dishwasher was breaking down over the summer and finally reached death's door.

I purchased a new LG dishwasher for my grandmothers home. Unfortunately, during its third use it displayed an error code and refused to function. LG assigned my warranty claim to Mr. Rogers Appliance. They have now been to the home 3 times over 15 days and the dishwasher is still not repaired. They have left an awful mess and it only gets worse each time they come. The dishwasher door is in the hallway, parts are in the dining room, and screws are strewn about the kitchen floor. At the end of every visit they promise to call when the parts arrive to schedule the install. They have never once called or even called me back. Their answer rate when I call is below 50%. We've been left with a partially dismantled dishwasher (unreturnable), a dangerous mess (my 92 year old grandmother has already tripped over). Last night was the last straw. I called to get an update and ask when additional parts would arrive and was given a truly unnecessary attitude. I finally had to call LG and ask to be reassigned to another repair company. This company is taking advantage of an elderly woman. We cannot even reconnect power to the kitchen without risking damage to the dishwasher because of the way it was left. For 15 days now my grandmother cannot even cook a meal in her oven. So that my grandmother could once again eat hot meals I finally had to order another new dishwasher and eat the cost. Thanks Mr. Rogers Appliance... You're the worst!

Well. Installed the unit prior to telling me cost. Thankfully it was not a very expensive fix.

Other than having to wait more than a week for the out-of-stock part to arrive, it was a good experience. It’s a challenge to be unable to use one’s washer for a couple of weeks! This is the second time in less than six months of owning this machine that the part went bad. Previous companies that tried to fix it said they could not find the source of the leak. My technician knew exactly what it was when I described the problem to him. He took pictures and showed me. I appreciated that. I hope I do not have future problems with this machine, but I will definitely call Mr. Rogers again if I do.

He quoted estimate based on my description and what could require replacement. I considered buying new range instead. I fixed it myself.

They came in for their appointment, quickly diagnosed the unit and let us know what the problem was and price for fixing it. It was fair considering we had already tried with two other companies which were absurdly high so we went with it. They came a few days later after ordering the part, did their job and now our fridge works like new!

Description of Work
A Sealed system on my frigidaire fridge

My mother called for repair and scheduled first appointment. They didn’t show up. No call no apology no anything, made a second appointment and again didn’t show up. Both times she sat waiting for 3 hours . This is no way to treat customers.

The first technician came out July 11 and we were told that it was the compressor. From conversations with LG we didn't think that was the problem, but he's suppose to be the expert. He placed an order for the compressor. When the compressor came in, July 21 the technician came out to fix the "compressor" he found ice build up in the evaporator coil and that the heater for the ice-fan had shorted out and it wasn't the compressor but a different part. The second tech did defrost the defective part and for a month all was good. August 15 the ice-fan (evaporator cover) arrived and a tech came for the repair. Before verifying they had the correct part he had taken the refrigerator apart and discovered that the part they had was not the correct part. Don't know if LG sent the wrong part or the repair company ordered the wrong part. So again we are waiting for the right part. Since this tech worked on the frig when it does the defrost cycle water drips out on to the floor. We have hardwood floors and are very concerned about damage to the floors. It is now Sept 17th and have decided to just purchase a new refrigerator.

2 visits, I and waited for a month on parts. 5-6 calls later, I gave up and called sears.

I would definitely hire for any future service required.

My wife ask a question online about disassembling our washing machine to clean the interior parts to remove the mildew odor and cleaning the drier. This company decided to send a serviceman out to our property without letting us know they do not provide this service. They charged us $79.00 to drive out to our property and tell us they don't clean the washing machines. This should of been done in their email reply. I tried to call the so called office and they didn't answer. I ask the repairman where the office was located and he said Honduras. Yes, Honduras the country. What a scam.

Description of Work
No work was done due to them not informing us that they do not provide a service in their reply email.

Hi [Member Name Removed], We apologize for the misunderstanding. We spoke to your wife yesterday about this. Your wife went into our website, and scheduled an appointment directly from the "Schedule Appointment" link. We have developed our website so that when a customer schedules an appointment online for the date they wish the work order submits into our Field Service Software automatically to lock the availability for it and guarantee your spot. Scheduling an appointment online is completely different than sending an email and asking a question. We would have saved you time and our technician a trip. We are currently in busy season, during summer appliances go bad more often and our technicians are currently getting 110% work volume. By sending a technician to your home we lost a spot on availability that we could had offer to any customer needing a repair. Our service call is $ 79, other companies in the area charge $ 89. If you decide to repair the appliance we apply it towards the total. That's how every appliance company operates. Every business got to pay bills. Our technician explained that mold cannot be removed completely from the washer, the only solution was to replace the parts he quoted you. So he provided a solution was rejected. We called and agreed with your wife it was a misunderstanding and told her we are sending the check back. Also for your information our local warehouse will be located on 2421 New Easley Highway, Greenville SC 29611, currently under rehab, but will be ready by July 2018. We also established our own call center, located in Honduras. I believe saying we are a scam just because our call center is located overseas is considered defaming. Scam means fraud, and we are a legit business that stands behind our services by offering the strongest warranty in town. Most large companies have their call centers in Honduras, for example Sirius XM, Alorica and so many others, so why a small local business can't do the same to try to keep their prices low and competitive. We don't offer mold cleaning. We do offer dryer vent cleanings, but when your wife scheduled the appointment online she scheduled an appliance repair not a dryer vent cleaning. For more information you can visit dryer-vent-cleaning-greenville.com Greetings, Mr Rogers
5.0

We were totally happy with the work performed. Customer service was fantastic and the professionalism displayed throughout was outstanding. We highly recommend this company.

They Replaced a pulley in about an hour and it works great again. The service technician was polite and explained what he was doing.

Description of Work
The dryer was making a very loud noise and knocking when running.

Showed-up on time, professional, efficient and didn't try to "up-sell" us on anything. Would use them again in a heartbeat.