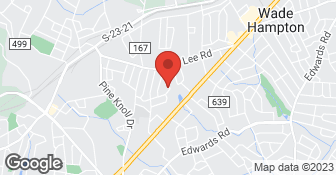 Description of Work
Changed the heating element on my dryer

They came out fast enough, the same day I called. The guy who came really wasn't interested in hearing what we had to say about the problem. He made his own decision, changed it out, and that was it. When the problem came back we decided we weren't interested in using them again.

Description of Work
They fixed my washing machine, but it only lasted for a while. We had to have someone else come back and fix it again later.

He came out the day I called and diagnosed the problem and came back the next day with the parts and fixed the problem! Very good service!!!

Called Dennis from Angies list referral. He was presented with a 2 year old Whirlpool refrigerator whose ice dispenser would not engage. Freely indicating he was not familiar with the model, he tried to figure out how to get to the motor to no avail. What looked like the path was not. Dennis went home, researched the model, returned the following day and made the repair. To say the cost was reasonable is an understatement. No repair BS. Persistence, patience, dedicated to getting it right. Would use him again in a heartbeat. Great guy, great service, exceptional honesty and integrity.

Description of Work
Ice dispenser in freezer door not working.

My gas oven had quit working. Hubby suggested Angie's List, which I joined, and then found this service, which I had used in the past for other work. I hadn't thought of them for the oven, despite their slogan, "One call fixes them all". I called that morning and he arrived a few hours later. He determined that the computer board was broken. He called to price a replacement and then said that it would cost just a little more to replace the whole thing than to replace that part, and, with the age of the oven, it was likely something else would fail. His recommendation was to replace the whole oven, which we will do.

Description of Work
Analyzed why our oven is no longer worked, and recommended a replacement.

Description of Work
Repaired the agitator in washing machine. I had him check 2 AC units while he was here. Charged $45 to come out, compared to $75 for the guy who fixed my garage door opener.

The provider arrived on time, did the work in a reasonable amount of time, and had fair pricing.

Description of Work
They did refrigerator repair because the defrost system broke down. The appliance would not cool. Replacement parts were needed.

Appliance Fixit Service Co. did a good job of fixing our dishwasher. They completed the repair in two visits because they didn't have the part to repair it on the first visit. The repair man explained the problem very well and how he was going to fix it. He also cleaned up all of his mess when he completed his work both times.

Description of Work
Appliance Fixit Service Co. repaired our dishwasher that wasn't draining the water out.

Appliance Fixit Service repaired our washing machine on the first visit. The man who came out explained that the washer wasn't registering the lid as being closed and he repaired the sensor. He also cleaned all of his mess and was aware of his surroundings.

My freezer was not keeping my food frozen so I had to have it fixed. The workers went right to the problem and got it fixed. I was happy with the service they provided. The workers were very nice and professional. They were here when they said they would be and the problem was resolved quickly. I have no complaints about this company.

Description of Work
I had my freezer in my kitchen refrigerator repaired.

Upstate Electrical Solutions specializes in Residential Electrical Repair in the Greenville, SC area. While other electrical contractors are going after larger new construction electrical jobs, wiring homes and commercial buildings, our electricians focus on fast response times to your electrical repair need. We can handle any electrical repair for your home. That's all we do! Our mission is simple: provide you, the homeowner, with the highest level of customer service while making electrical repairs and installations that are safe, reliable, and cost appropriate for your budget. Please read some of our customer reviews. Upstate Electrical Solutions is the electrician to call in Greenville when you need fast and reliable service that comes with upfront pricing and a 100% money back guarantee. We make sure every customer is completely happy before we accept payment for our service. All prices are put in writing before any work is performed and our electricians will explain what repairs are needed in easy to understand terms so you know exactly what you are paying for. Upstate Electrical Solutions provides electrical services for Greenville, Mauldin, Simpsonville, Taylors, Greer, Fountain Inn, Berea, Traveler's Rest, and Piedmont.  …

YOUR DEPENDABLE ELECTRICAL COMPANY. WE ARE FAST,FRIENDLY,AND WITHIN BUDGET! Attention to Detail! SERVICE UPGRADES. NEW CONSTRUCTION OR TOTAL HOME REWIRING INSTALLS OR TROUBLESHOOTING $145 for the first hour and$95 each additional HOUR BONDED AND INSURED UP TO 2,000,000. WE DO NOT USE SUBCONTRACTORS, WE DO OUR OWN WORK. WE ARE A 4 EMPLOYEE COMPANY, SO SMALL JOBS ARE WELCOME! Licensed #RBE.2448 VISA AND MASTER CARDS,AMEX, Paypal ARE WELCOME. 15% OFF TO New Customers FREE ESTIMATES  …

Pro Electrical Services LLC is a licensed commercial and residential electrical company. Over 10 years of experience in new construction, remodel, service calls, commercial, residential and industrial work. With specialty experience ranging in all sorts of electrical systems from motor and controls, fire alarm systems and multiple lighting systems. We hold in high regard honesty and integrity. Customer satisfaction is our top priority!  …

Bonded
Insured
All statements concerning insurance, licenses, and bonds are informational only, and are self-reported. Since insurance, licenses and bonds can expire and can be cancelled, homeowners should always check such information for themselves.To find more licensing information for your state, visit our Find Licensing Requirements page.
General Information
Free Estimates
No
Eco-Friendly Accreditations
No
Payment Options
Check, Visa, MasterCard
Senior Discount
NO
Emergency Service
Yes
Warranties
Yes

APPLIANCE FIX-IT SERVICE is currently rated 4.7 overall out of 5.

No, APPLIANCE FIX-IT SERVICE does not offer free project estimates.

No, APPLIANCE FIX-IT SERVICE does not offer eco-friendly accreditations.

No, APPLIANCE FIX-IT SERVICE does not offer a senior discount.