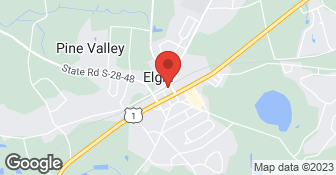 Description of Work
Nothing. He said he would do the job but would never commit to a start time, would not communicate with us. We had to call or text him to find out any information as to what or when he would begin work. He eventually stopped responding to any contact. Never heard from him again.

Very satisfied with all aspects of the project. Had a few issues with trying to match existing windows but it was just a case of people neglecting to return calls. Dan is very organised and ethical. Would choose him again.

I met Daniel Lee about three years ago, when I lived in Elgin, SC. He built a terrific four season addition on our home. The roof had a leak, but Daniel worked diligently to locate the well-hidden source. When he found the origin of the leak, it was clear it had nothing to do with his construction! The leak actually was above the new work, but was entering the home at a dormer, and trickling its way into our new room. Technically, the leak wasn't his problem; it didn't happen from anything he did, yet he still took responsibility for it until it was located. Then he fixed it at a very fair price. My second encounter with Daniel was after I'd relocated out of state, and had my Elgin, SC, house for sale. I was a thousand miles away, but needed some plumbing and electrical work done before I could close on the home. Imagine being in the mid-west and needing to find a contractor for your house in SC! Not to worry, Daniel had earned my trust from his previous work, so it was him I called, from the mid-west, to do the work. He promptly quoted me a price, did the repairs, and I was able to close on time. My third experience with Daniel was when my mother-in-law, who had moved to the mid-west with us, was selling her Columbia, SC, patio home. Again, the pre-purchase home inspection turned up several issues. Again, I was a thousand miles away and in need of somebody who 1) could do the work, and, 2) that I TRUSTED. Daniel was #1 on my list of people to call. He assessed what needed attention, quoted a price, and completed the work on time and at a very fair price. My biggest complaint with contractors in SC had always been that they'd agree to show up on a certain date and time, and almost always were late (without calling), or never showed up at all. Daniel never missed an appointment, and always called me back in 24 hours or less. He's responsive, polite, clean, doesn't smoke or use bad language, AND he gets the work done correctly, at a fair price. If I still lived in the Columbia/Elgin area, Daniel would be the first person I'd call for any repairs or construction projects.

Drywall and ceiling repair and restoration. We make damaged walls look new again including dings, holes and water damage. Our work is guaranteed. We guarantee your satisfaction and we won’t leave until the job is done right. We pride ourselves on the quality work we provide, while delivering great customer service! Check out our services offered and call or click to schedule a free estimate today.  …

Premium Repair Solutions is currently rated 4.6 overall out of 5.

No, Premium Repair Solutions does not offer a senior discount.

Are there any services Premium Repair Solutions does not offer?