With Angi since January 2020 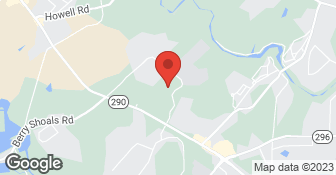 With Cash Improvement your dream home is our top priority. We do everything from T.V Wallmounts, painting, landscaping, Khoi pond cleaning and scaping, roofing jobs, window repairs, deck building and repairs, laying concrete, building screened in porches and so much more!

John cash came to my house and was not prepared when he first arrived. He came 2-3 times before starting the project and claimed that Lowes ordered the wrong material for him for our gutters. So we let that slide because as long as they could be put up and done correctly and work properly there were no problems for us. However it took all day to install gutters on the front and back of the house, and then a few days later it rains and it was quickly proven the gutters were not functioning properly. Drainage was not a thing. The gutters started to pull away from the house and would all collect in one area. He came back out to try to fix it and thought he did so. However, the next rain proved there were no improvements. So he came out again and left before finishing the job because of a family emergency. He is annoyed at this time with the gutters, and he informs us that he purposely ordered the cheaper gutter option he was not familiar with in order to try to make more money on this job. We were in shock that he would admit this. He then said he would probably buy the correct gutters we were charged for and just eat the cost because it was his fault. So we allowed a week or more to pass before reminding him that he needed to come back. He says he will get out as soon as possible. A month passes and he is still not back. Contact him and he tells us if we buy all the proper material that should have been ordered the first time he will come out and put up new gutters with no charge for labor. I would never recommend him because he is not the least bit professional and is not willing to correct the mistake he caused by being greedy.

We Are The Light

We Are The Light is the Carolinas trusted outdoor lighting company. Illuminating your home or office with outdoor LED lighting is one of the best ways to both enhance and secure your home or business. Each home and office is unique and so should the approach to enhance your property. With our no cost evaluation we will do a comprehensive review of your property while considering many aspects from hardscape and softscape lighting, architectural accents and of course security. Combined with state of the art low voltage LED fixtures and the depth of our lighting design team, we will elevate your property to a new place that will cause your property to come to life each and every evening.  …

MJ Electric provides all residential electrical services including panel upgrades, lighting, troubleshooting, and all additional electrical upgrades. Our employees use the finest technology to complete the job right. We are a local business, family owned and operated wanting to serve the community in a fair and timely manner.  …

How is Cash Improvement overall rated?

Cash Improvement is currently rated 1 overall out of 5.

No, Cash Improvement does not offer eco-friendly accreditations.